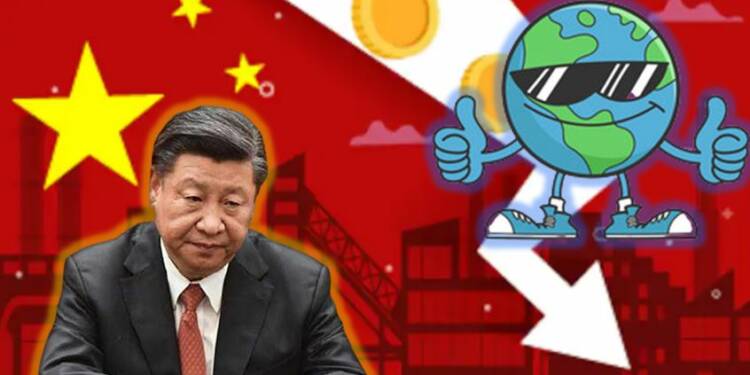 China’s economic rise over the past three decades has been miraculous. What used to be a mere $400 billion GDP in the 1990s is now the world’s second-largest economy worth a whopping $14 trillion. China became the engine of the world economy, as markets across the world got inundated with cheap made-in-China products.

How the World facilitated the rise of China?

But it would be an injustice to the western world if China’s wide strides in the economic realm are solely attributed to the Chinese Communist Party (CCP). The western nations, and the USA in particular, helped China expand its economy at a blistering pace that has now morphed the communist nation into an existential threat for the democratic powers across the globe.

For instance, China’s inclusion into World Trade Organisation (WTO) in December 2001 paved the way for China to become the world’s manufacturing superpower. The west hoped that the WTO terms would enable China to liberalize its economy and help China’s transition to democracy.

Former US President Bill Clinton called China’s inclusion “a hundred-to-nothing deal for America when it comes to the economic consequences,” and one that would “have a profound impact on human rights and liberty” in China.

This spurred huge FDI (foreign direct investment) inflows towards China. Cheap forced labour bundled with large-scale manufacturing developed China into a slayer of its competitors. Resultantly, the value of China’s manufacturing on a gross-value-added basis had surged 49.2% higher than the US level by 2016.

In 2016, China’s gross-valued-added manufacturing was equal to 28.7% of its GDP, compared to 11.6% for the United States. This illustrates that China’s manufacturing sector grew rapidly at the expense of the US and other major economies like Japan.

How China exploited the WTO and reneged on its commitments:

China remained a front-runner in exercising its rights and privileges of the WTO’s membership. On the other hand, it showed the same vigour in tossing around its commitments and responsibilities.

Since China joined the WTO in 2001, subsidies have financed approximately 20% of China’s manufacturing capacity every year. The subsidies help economically inefficient firms to be more competitive.

Also read: To hide its economic downfall from the world, China dons an invisibility cloak

One major argument for advocating China’s entry into WTO was that it would help the western countries bridge the gigantic trade deficit with China. However, the irony is striking. From 2001 to 2020, the United States accrued a $6.82 trillion deficit in trade in goods with China.

This data is seemingly enough to prove that China’s economic rise is hardly a miracle, and rather a gruesome blunder on the part of the democratic world.

Things began turning upside down in 2016:

Finally, the world realized its folly in 2016, when President Donald Trump rose to the helm in the US. In 2017, the Trump Administration launched a Section 301 investigation of China’s innovation and intellectual property policies deemed harmful to the USA’s economic interests. It subsequently raised tariffs by 25% on $250 billion worth of imports from China. And then in 2019, Trump made his intentions clear of raising tariffs on almost every product originating out of China.

Then the pandemic arrived close on the heels of Trump’s removal from the White House, which deprived China of any relief or rejoice. It was the first time that the world realized its over-reliance on China. Foreign investors, multinational companies, venture capital firms – all got their pockets burned in China. The world acknowledged the supply chains as a vital component of their national security, and calls for decoupling from China grew even stronger and louder.

As a result of this Trump-initiated campaign of making China pay for its economic warfare and IP theft across the world, the world economy is now fast detaching from that of the communist nation. Gone are the days when red stocks in China would trigger a domino effect in other major economies. For the first time in three decades, the world is growing at the expense of China. The world’s economy is now inversely proportional to China’s economy.

China is inversely proportional to the world:

Before 2015, the correlation between the GDP growth in China and other major economies was nearly perfect. A mere six years later, it is barely visible. China is sinking, but that is having a negligible impact on India, Indonesia or Vietnam. The pandemic continues to wreak havoc in China, but other economies are recovering impressively. China’s exports are collapsing rapidly. Exports contributed 35% to China’s GDP in 2010, but the number dropped to 20% as of today.

Before the pandemic, China contributed 35% to the growth of world GDP. But the share plummeted to a mere 25% in 2020. And this trend is expected to become even steeper in coming years. China has already reached the pinnacle of its growth, and the fall of China’s economy is imminent. China is no longer the ‘factory’ of the world, and its fall would barely bother the sprawling economies of the world.