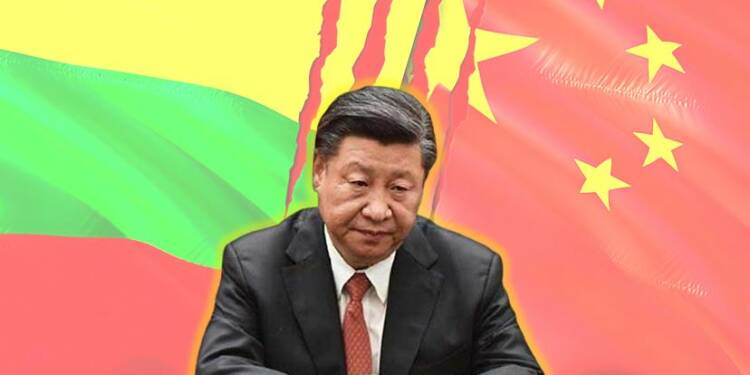 After going nuclear on Lithuania last week for allowing Taiwan to open a de facto embassy in its capital, China temporarily deleted Lithuania as an economic partner. Lithuanian exporters were surprised to learn that their country had been removed from China Customs’ list. As a result, they were unable to clear containers bound for China, while exporters attempting to send goods to Lithuania faced the same difficulties. This was the last ditch attempt to punish the Baltic country for its increasingly close ties to Taiwan. However, just like earlier actions, this too will have little impact, making China’s trade war against Lithuania its worst defeat in recent memory.

Also read: China’s delicious meltdown after Taiwan uses its own name at the new Lithuania office

The move demonstrated the depths to which China is willing to go when confronted with criticism from minor countries, as evidenced by its rage at the Morrison government over the diplomatic boycott of the Winter Olympics. China has already imposed tariffs on Australian coal, wine, meat, barley, seafood, and coal totaling $20 billion. “This is unheard of. Full trade prohibitions are quite rare outside of wartime settings – think North Korea, US-Iran sanctions, and so on,” said Jeffrey Wilson, director of the Perth-USAsia Centre at the University of Western Australia.

The U-turn and quickest defeat for China:

Following criticism from the European Union, the unofficial restriction, which was never recognised by Chinese authorities, was purportedly lifted after only four days. The diplomatic spat erupted as the European Commission proposed new “anti-coercion” measures this week, allowing it to impose sanctions on individuals, corporations, and countries who attempt to weaponize trade. Fearing a retaliation from the European Union (EU), the Chinese Communist Party (CCP) and Xi Jinping backtracked on the decision to blacklist Lithuania.

According to the South China Morning Post, Lithuanian exporters were able to complete orders for shipments to China on Tuesday, while some were still experiencing technical issues. China has never confirmed the trade ban, as it rarely admits to engaging in economic pressure, as doing so would be a violation of WTO norms. It also doesn’t give in to diplomatic pressure too often. Academics remarked that Beijing’s swift reversal of the move against Lithuania was surprising, given that it had never reversed down from restrictions or bans on Australian exports.

On the other hand, as reported by TFI, Lithuania had decided to have a “Taiwanese Representative Office” in its capital city – Vilnius. With this move, Lithuania had become the first country in Europe to use the word ‘Taiwan’ in representative offices or de facto embassies opened by Taipei in capitals across the world.

This too did not go down well with Beijing, and as per the latest reports, China’s embassy in Lithuania has suspended consular services until further notice for “technical reasons”. The suspension came just after China downgraded its diplomatic ties with the Baltic State.

Lithuania exports $493 million worth of goods to China, including grains, timber, and furniture, and buys $1.4 billion worth of goods. Many say China’s tactic of putting pressure on smaller countries is failing in the face of a diplomatic boycott of the Winter Olympics, and increased pressure to behave, now that it has filed for membership in the Trans-Pacific Partnership trading bloc. In a report on China’s economic coercion, Viking Bohman, an analyst at the Swedish National China Centre, said, “Lithuania’s policy move has put China on the back foot by providing it with a problem.”

Lithuania became the ninth country to face Chinese trade restrictions; other countries include Japan, Norway, South Korea, Taiwan, and the Philippines, in addition to Australia. Lithuanian politicians are pressuring the other 26 EU countries to take a tougher stance against Chinese pressure and influence. In the background of such developments, the U-turn comes as the fastest acceptance of defeat on the part of China, and the fact that it was a small country like Lithuania – makes it all the more poetic.

A war between Malaysia and the Philippines. Anytime now!