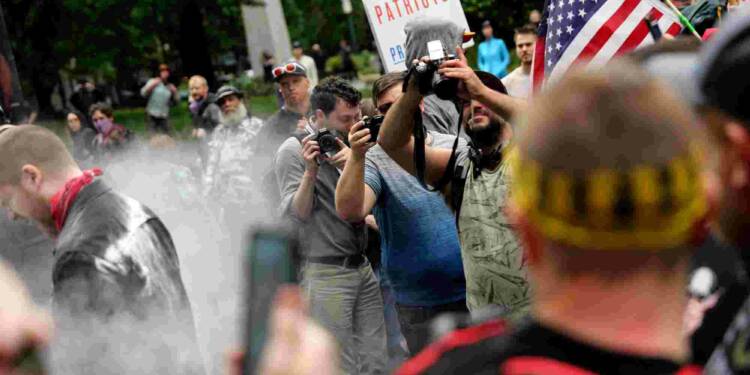 What is Antifa Protest in Portland

About 200 black-clad activists, led by Portland-based Rose City Antifa and other left-wing Antifa protesters, gathered behind police lines and concrete barricades, mingling with hundreds of counter-protesters. Dozens of black-clad demonstrators turned against the right-wing gang, throwing flash grenades and pushing Portland police cars into the grass in the midday sun.

The counter-protest split, and some large Antifa groups fled from the riot police as they tried to barricade them. Riots erupted when a group of anti-fascist protesters left the designated area and moved to the Proud Boys rally, repeatedly trying to bypass police blockades.

In the United States, Antifa is a left-wing anti-fascist and anti-racist political movement. Antifa, as a loosely organized collection of autonomous groups, uses both nonviolent and violent direct action to achieve its goals. Antifa uses protesting and other techniques against persons it considers to be fascists and racists, such as neo-Nazis, white supremacists, and other far-right extremists, such as doxing, harassment, physical violence, and property damage.

Poster and pamphlet campaigns, mutual aid, lectures, protest marches, and community organization are all examples of nonviolent antifa political activism. The definition and explanation of Antifa given here is according to wikipedia and TFI do not endorse or propagate any kind of hatred or misinformation. Street brawls and melees erupted in Portland, Oregon, during clashes between Antifa protesters and right-wing protestors.

Police said that conflicts between various right-wing and anti-fascist groups in downtown Portland resulted in the arrest of at least three people. The Portland subsidiary of CBS, at least three right-wing groups, including Proud Boys and #HimToo, an anti-anti-law protester, held rallies or demonstrations.

The police pointed out that although three separate demonstrations lasted more than five hours, the riots in June were limited to a small area in downtown Portland, where hundreds of people have been in action. They also arrested two people during the May Day attack on an Antifa member, which had become the rally slogan of the city’s extreme left.

Blazak, an expert on hate groups from Oregon, said he fears the extreme reaction of a small group of counter-protesters would backfire. Police had been dispatched to the city to avert conflicts between conservative groups and counter-demonstrators who had planned to assemble.

The police tried to split the opposition. Nearly an hour after the demonstration began, the police said they had confiscated the participants’ weapons, including bear spray, shields and poles. The police seized metal poles, bear spray and other weapons, and closed bridges and roads in an attempt to divide the hostile group. The authorities closed bridges and roads to divide hostile groups.

Also Read: Anti-regime protests are shaking Iran to its core

According to police and local reports, about 150 demonstrators marched on the streets of Portland, clashed with the police on bicycles, smashed the windows of the Democratic Party’s office and painted anarchist symbols on the signs.

Left-wing protesters began marching through the city center from Directors Park, destroying the Nike store near Pioneer Court Square, the Brazilian steakhouse Fogo de Chao, Verizon, and the bank. Some protesters smashed the windows of the Oregon Historical Society, which had previously been smashed by protesters who declared October “Indigenous Fury Day.”

Local police and federal agents used tear gas, rubber bullets and illegal methods to boil the peaceful crowd. All of this happened after the police responded to George Floyd’s protests on a large scale last summer, in which peaceful protesters were beaten and gassed, then arrested and taken. Throw it into a vehicle that is not marked by the Trump administration.

This is a different strategy seen after several months of police intervention during the protests in downtown Portland in the summer of 2020, when the PDB and Federal Police fought the Antifa protesters for nearly 100 consecutive nights.