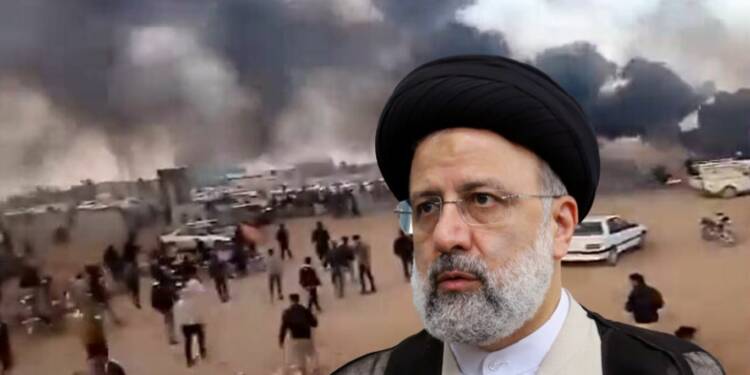 Iran is facing what we call mismanagement of water resources. Iran is a country with a continental climate. Rainfall is relatively scant and is concentrated from October through April. There was never an abundance of water in the Shi’ite country, with most of its rivers being short, shallow and seasonal in character. However, 2021 is worse. Iran faced its driest summer in five decades, which has exacerbated the water crisis in the country. But it is not entirely the drought which is causing an intense water shortage in Iran. The real reason is that Iran has not been able to manage its scant water resources prudently.

Now, Iran is facing mass anti-regime protests. It has snapped internet, is cracking down on protesters, using violence against them, and labeling them ‘external agents’ and even terrorists. Iranian security forces used tear gas and batons on Friday during clashes with protesters demonstrating in the city of Isfahan in support of farmers angry over water shortages. Isfahan has emerged as the heart of the protests, and social media was replete with chaotic scenes on Thursday and Friday, as tents were set on fire, with police teargassing the protesters and even resorting to birdshots. Interestingly, the protestors in Isfahan seem to have come down from all over Iran to show their solidarity with the anti-regime movement.

Also read: Iran is imploding from within as protests against the Islamist regime swell once again

According to AL-Monitor, days after thousands of Iranians took to the streets in Isfahan to protest water policies and the government’s inability to address the water shortages, Iranians in the adjacent province of Chaharmahal and Bakhtiari took to the streets over the same cause. According to provincial officials, nearly 200 villages in the province receive their potable water through tankers that are delivered to their areas. The region also struggles to supply water for agriculture, which employs most residents of the province.

Iranian lawmakers had recently sought action against former president Hassan Rouhani. That the protests broke immediately after, show how the moderate faction in Iran – which forms a significant bulk of the population, is not happy.

The beginning of the end?

Will the water protests be the undoing of Iran? The sheer scale of protests which have battered Iran suggest that they are much more than just about water. Also, the repeated bouts of these mass protests indicate that they are, in fact, a coalescence of a variety of issues – water scarcity being one of them. The people of Iran have really grown sick of the Islamic regime in place in the country since 1979. The hard-line regime has brought Iran nothing but misery, violence and economic distress.

People chanting "Death to the Dictator" in Isfahan Zayandeh Rud riverbed as they confront the repressive forces on Friday morning, 26 Nov 2021, in a per-announced protest against the regime #IranProtests pic.twitter.com/mopFiOXYm2

Images from yesterdays #Iranprotests (day12) are truly phenomenal
thousands protesting on the banks and inside the dried Zayandehrud River (#Isfahan)
protesters have made clear they aren't going anywhere until IRGC opens dams and water flows backpic.twitter.com/RAFDk1XEzO

With the rise of Ebrahim Raisi as Iran’s president, the patience of Iranians is wearing thin. The fact that Iranian leadership is more interested in transporting instability in the Middle East and lend resources to its proxies, but is incapacitated to make the life of its own citizens less worse off, shows they do not have the best interests of Iranian people in their hearts. The presidential elections of Iran were boycotted by millions of Iranians, as they refused to play the role of puppets in the fixed game of their country’s Islamic regime. Now, with tempers running high and patience wearing thin, the people of Iran have entered a decisive phase, and they might just cause irreparable damage to the Islamic regime placed in Tehran.

The Shi’ite nation has built way too many hydroelectric dams and has also cultivated water-intensive crops like rice, wheat and sugar cane. Since Iran is facing international sanctions and trade restrictions, it tries to be self-sufficient and keeps growing such crops despite the enormous toll that it takes on the country’s ecology.

Khuzestan is witnessing a major show of disaffection from the Ahwazi Arabs. They have serious grievances about state-sponsored oppression, discrimination, marginalization, environmental hazards, and poverty, under the present fundamentalist regime in Tehran. In July this year, Khuzestan rose up in arms against the Iranian regime. But Khuzestan protests were different. Khuzestan has a Sunni Muslim majority.

Also read: Are the people of the Islamic republic of Iran turning Un-Islamic? There are strong indications of it

Therefore, when water and electricity protests rocked the province in July, the Shia regime of Iran did not blink once before mass-shooting protesters and killing them. This only further galvanised public opinion against the Islamic regime.

Iran is beginning to implode. With Iranians rising up in arms against the regime for its visible ineptitude and disregard for domestic issues, Ebrahim Raisi is in for a rocky ride ahead.