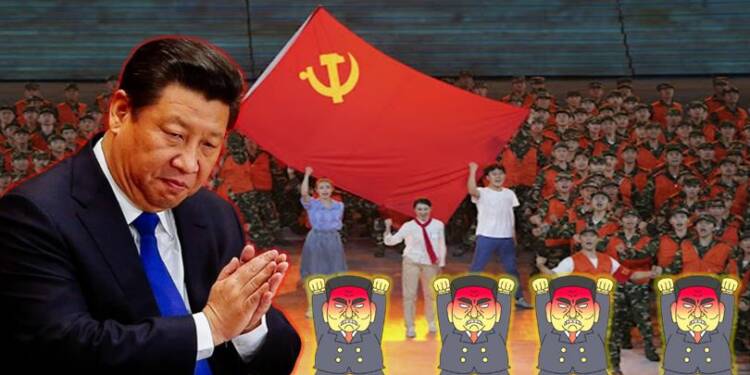 The Chinese Communist Party desperately needs babies – babies who would one day work in Chinese factories and help China stave off its economic crisis. But Chinese people are adamant about punishing the belligerent government. So, they are doing the exact opposite of what they are being asked to.

They are not producing babies. They are shying away from tying knots, to avoid restrictions. And now, they are openly up in arms against the CCP’s latest diktat that requires them to produce at least three babies to prove their nationalism and patriotism.

Weibo erupts in anger against the CCP:

China’s Twitter-like microblogging platform, Weibo, erupted in anger on Thursday, lambasting the Chinese government for attempting to interfere in their personal lives. One hashtag on the issue garnered 5.7 million views.

Another user commented, “when going on blind dates in the future, people will no longer ask how many apartments you have, they will ask: are you a party member. If yes, then can say goodbye.” This shows the diktat had caused unease even among the CCP male members because it would have rendered them as pariahs for Chinese females, who don’t want to shoulder responsibilities of big families and three children.

CCP scrambles to take down the diktat:

Hence, in its quest to tame the infuriated Chinese, CCP had to retract this diktat within 24 hours of its announcement. The article on a state-backed website that asked the CCP members to produce at least three babies was taken down, after it sparked heated discussions on social media.

The repudiation of the three-children diktat perfectly embodies today’s miseries and woes of the CCP. The CCP knows it lacks the mandate to govern the Chinese people. The immense backlash denotes that the Chinese are no longer willing to accept the CCP’s belligerence with their heads down. Not only are they now standing up to the Chinese tyranny, but they are also successfully making the CCP reverse its stance.

Why did the Chinese oppose the three-children diktat?

The ‘One Child policy’ was implemented in China back in 1980 to curb the country’s booming population. Women and men were forced to undergo sterilizations. Fines and penalties were imposed, countless lives were lost, and families got ruined – just because the CCP wanted them to not have more than one child.

For the Chinese people, this is the payback time. Now the CCP wants the Chinese to have three children. A China-owned news website recently published an article asking the CCP members to produce three children without fail. The article said, “No party member should use any excuse, objective or personal, to not marry or have children, nor can they use any excuse to have only one or two children.” But the Chinese are barely moved. They don’t want to be treated like hens and cocks. So, they are resorting to confronting the government.

Beginning of the end?

China’s strong economy forms the bedrock of the CCP’s authoritarian rule over China. As China’s economy braces for a future full of miseries and distress, the CCP is fast losing its grip over the nation. Hence, when the Weibo users took on the CCP by its horns over the three-children diktat, it withdrew the article in the blink of an eye.

Also read: CCP hasn’t learned its lesson from the disastrous “One Child Policy”, their new kids policy is a recipe for disaster

But that’s not where this anti-CCP movement is going to end. By forcing the CCP to take back its contentious diktat, the Chinese people have tasted the blood now. And now, they want more. Their appetite to fight out the CCP’s tyranny is bound to grow even stronger. The anti-CCP voices in China are bound to grow even louder. This is just the beginning; the beginning of the end of the evil CCP empire.