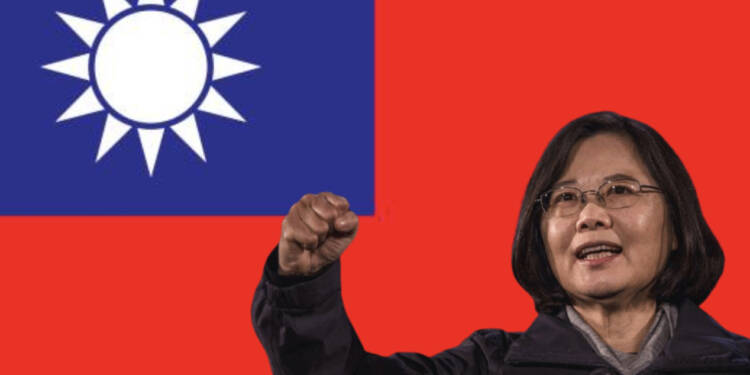 Taiwan has long been waging its own war against China, trying to free itself completely from the clutches of CCP and its authoritarian leader. The threat of a Chinese invasion is and has been real for Taiwan. Thus, the country has shored up its defenses to an extent that China may have to go punch for punch with Taiwan, or otherwise, the David in this fight might come up on top.

Reportedly, the Taiwanese defense ministry has asked the lawmakers for a whopping $17 billion defense budget for 2022. The budget will pave way for the induction of new air-defense missiles for the navy’s six Kang Ding-class frigates plus four MQ-9B armed drones for the air force as well as a host of missiles for that service’s growing fleet of new F-16V fighters.

Ever since Tsai Ing-wen was elected for her second term last year, Taiwan has taken an aggressive route to counter Beijing, and so far, it has paid rich dividends.

As reported by TFI, to counter China in the blue waters, Taiwan is building eight state-of-the-art submarines. The first submarine is expected to be delivered to the Taiwanese military by 2025.

The United States, United Kingdom, India, Australia, South Korea, Canada, and Spain are the nations that have been helping Taiwan build cutting-edge submarines which can blow a Chinese invading naval fleet up in smoke.

Domain experts believe that if China was to attack Taiwan, it would be through multiple openings across the island. However, despite boasting of the largest Submarine fleet, the Chinese troops are inexperienced and lacking in warfare experience.

PLA-N lacks experience and Taiwan is dangerous in its backyard:

Moreover, Taiwan, in the last few decades has managed to scout and secure every landing spot across the island. It will be incredibly difficult to oust Taiwan in its backyard, in its own mapped territory.

The strait is stormy and the terrain between the likely landing zones and Taiwan is rugged and mountainous. And going by the beating that Indian soldiers gave to the Chinese princes’ in the Galwan valley last year, it can be ascertained that PLA is not a fan of mountainous warfare.

Superior missiles to that of China:

Taiwanese marines could easily camouflage while armed with anti-tank missiles. A surprise attack would destroy a whole battalion of Chinese light-armoured vehicles struggling to navigate a winding mountain road.

Speaking of missiles, Taiwan has begun mass production of a long-range missile and is developing three other models. Taiwan’s indigenous supersonic missile the Yun Feng already poses a serious risk for China.

Read More: Taiwan is mass-producing long-range missiles, while the Biden administration is only signing deals for optics after the Alaska fiasco

Waging a political battle to call out China:

On the political front, Taiwan has been giving China nightmares in Lithuania, Honduras, and the Solomon Islands. While the Solomon Islands are at the brink of the civil war because of increasing Chinese influence, Lithuania has taken many steps to hurt Chinese interests, ranging from campaigning against Chinese smartphones to opening the first “Taiwan Representative Office” in the capital city, with the name Taiwan on it.

In Honduras, a pro-China leader seeking to rise to power has been strong-armed by the U.S. and Taiwan into rectifying her rather friendly tone towards Beijing.

Leveraging its ability to export the precious modern-day commodity- Semiconductors:

As for flexing muscles on the economic front is concerned, Taiwan sits on the precious mountain of semiconductors that Xi Jinping so desperately needs for his failing IT sector. To add insult to injury, giving a jolt to One China policy, the Narendra Modi government is in advanced talks with Taiwan over bringing a chip plant worth an estimated $7.5 billion to India to supply everything from 5G devices to electric cars.

Read More: In a sucker punch to One China policy, India ties up with Taiwan for crucial semiconductor partnership

In September, at the first-ever in-person Quad summit, Japan, Australia, and the USA, along with India, had decided to end China’s global domination dreams with a single move – restructuring the semiconductor supply chains.

Taiwan is ahead of the eight-ball at the moment. China may have a bigger budget and an expansive army, but Taiwan is playing the strategic game, and so far, Beijing has been coming second best in the competition.