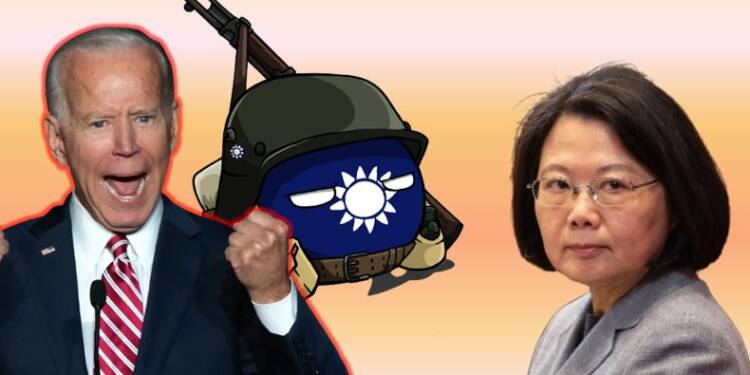 Donald Trump saw in Tsai Ing-wen, a powerful ally and an asset in East Asia. Since her election in 2016 and then the re-election in 2020, Tsai Ing-wen has brought Taiwan together with her focus on the Taiwanese identity and its uniqueness. While this was essentially a good thing for the USA under the Trump administration who was overtly expressing his policy of containment of China, it has become a liability under a sleepy Joe Biden, who is too scared to confront the Chinese Communist Party (CCP) and Xi Jinping for reasons extensively covered by TFI.

Now, the largest opposition party in Taiwan, The Kuomintang (KMT) has joined hands with the Biden administration to oust Taiwan’s President Tsai Ing-wen. Kuomintang deputy director Eric Huang will inaugurate the party’s new office in Washington DC, later this month. The decision is a tactical recognition that the party has a reputation problem in Washington. While President Tsai Ing-wen’s Democratic Progressive Party has been well-received since taking office in 2016, Joe Biden wants a relatively CCP-friendly KMT to become the prime mover of the USA’s Taiwan-China policy.

After fleeing to Taiwan in 1949, the KMT, which ruled China before being toppled in the communist revolution, imposed its Chinese nationalist ideology on the island. Even after modifying its policies during Taiwan’s democratisation in the 1990s, it continues to embrace the idea that Taiwan and the mainland both belong to one China, although the interpretation may vary.

That belief is increasingly out of line with public sentiment, as an overwhelming majority of Taiwanese reject unification with China, and during the past decade, the KMT’s support has gone into a spiral. The proportion of voters who identify with the KMT has plummeted to 18.7%, according to the Election Study Center at National Chengchi University, compared to 31.4 per cent for the ruling Democratic Progressive Party.

“If the KMT fades away, it will cause great concern because it could embolden Taiwan independence forces, and we would suggest that the chances for peaceful unification are diminishing,” said a Chinese scholar who declined to be identified due to the sensitivity of the subject.

Tsai Ing-wen is a threat to Joe Biden’s attempt at kowtowing to Xi Jinping:

Apart from trade issues, Tsai and her party, which were formerly considered as a threat to US-China relations by Washington, were viewed as dependable partners in the face of a growing Chinese military threat during the Trump administration. The United States’ treaty allies Japan and the Philippines, both of which are about as close to Taiwan as China, are equally under threat and became a reason for closer ties between Japan and Taiwan.

Joe Biden, on the other hand, wants to pursue a strategy of reconciliation with China, and Tsai Ing-wen stands in the way. Joe Biden has been obliged to toe the line of the East Asian allies due to Taiwan’s President’s massive international presence and her concretisation of intense collaboration with Japan and Australia.

Also read: Blinken made ‘crystal clear’ to China that Biden’s promise to defend Taiwan was just a ‘gaffe’

However, Joe Biden has missed no opportunity to make sure that he clarifies that he stands in consonance with CCP when it comes to the One-China Policy. His priorities were amply visible earlier on the margins of a G-20 summit. The US Secretary of State Antony Blinken and Chinese Foreign Minister Wang Yi met and discussed USA’s commitment to the one-China policy.

As per reports, both exchanged warnings against acts that could exacerbate tensions across the Taiwan Strait. However, in the same breath, Blinken said that Washington opposes any unilateral changes by Beijing to the status quo around Taiwan.

While Taiwan’s President Tsai Ing-wen has succeeded in keeping the country out of any widespread threat of the Covid-19 pandemic as well as taking on the aggressive actions by the Chinese Communist Party, on the other hand, Xi Jinping has been destroying his economy and all the legacy that was left behind by his predecessors.

Also read: Jinping is so scared of Tsai ing-Wen that he is raining money to stop her from becoming President again

The failure of Xi Jinping and the mess of his creations has heightened his vulnerabilities, and in this predicament, he has decided to direct all the anger and vulnerability on Tsai Ing-wen, given that she has successfully repelled all the actions Beijing took to corner Taiwan into submission to the CCP.

In the face of an ever-popular President of Taiwan Tsai Ing-wen, Beijing is trying to punish all her corporate backers and make her Democratic Progressive Party (DPP) cash-starved, so that she can be replaced by a more friendly leadership, which, you guessed correctly as being the KMT.

The island will host regional elections next year, which will serve as a forerunner to the next presidential election. A sharp drop in corporate funding to the DPP would help the Kuomintang (which has advocated for a more conciliatory approach with China) to win those elections. According to China’s script, the Kuomintang will reclaim power in the 2024 presidential election if this trend continues. Unfortunately, Joe Biden also wants the same result.

After returning to power in Taiwan, the Kuomintang closed its last office in the United States in 2008. After 13 years of being unable to establish a presence in Washington, simply having a presence will be a significant step toward regaining significance within the beltway. While this would not have been supported by the Trump administration, Joe Biden is more than happy to provide some legitimate recognition to the party that has comparatively high acceptance among the CCP rather than keep a pro-independence Taiwanese nationalist DPP in power.

The news of the opening of an office in Washington also comes at a time when a vote supported by the Kuomintang threatens to ruin the possibilities of a US-Taiwan trade pact, which China would definitely welcome. While it is obvious why the Chinese Communist Party will be happy with the fallout, this will also be helpful for Joe Biden, who can use this as a reason for overtly coming out against the Tsai administration as well as make sure that the Taiwanese people are scared into voting for KMT.