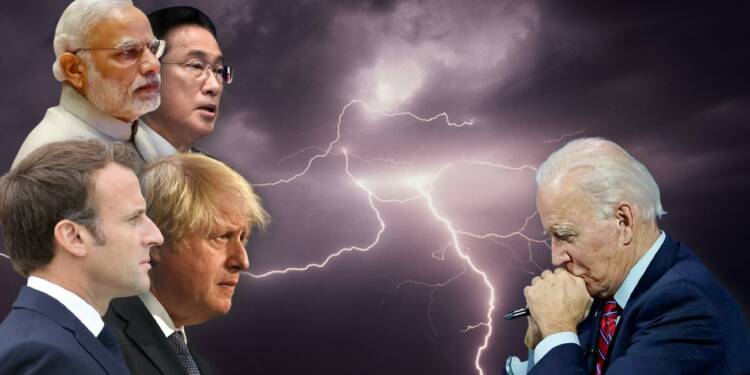 The Biden administration has a very ironic policy approach when it comes to weapon sales and alliance structures. In such a short time, Joe Biden has disappointed the USA’s allies so many times, that they have started collaborating amongst themselves, ignoring the US entirely. While the Biden administration was okay with leaving high-tech military equipment and vehicles for the Taliban, it continues to fleece its allies when it comes to the sale of defence tech and weapons. So US allies are going their own ways.

India bought S-400 anti-missile systems from Russia and will buy the new S-500s too. The UAE dumped the F-35 deal with the US and booked the French Rafale jets instead. And now, the UK and Japan are also trying to go on their own, in the joint development of the engine for the next-gen Japanese Fighter Jet programme.

Japan’s Yomiuri news reported that Tokyo is finalizing its policy on how to jointly develop the jet engine of its F-X fighter with Britain. The United Kingdom is an apparent high-capability partner for Japan in technical areas where the United States will not share its know-how. Japan is undoubtedly seen by the British as a viable option to France and Germany in terms of sharing development costs, particularly in the realm of combat aircraft. We get hints here and there that Japan has technology that the British would consider significant.

Japan and the United Kingdom are forming an unexpected defence-technology alliance. The cooperation is mostly preliminary, but it is far from basic: the two countries are collaborating on some of the most difficult combat aircraft systems. And there’s reason to believe they’ll pool resources for more of these initiatives.

Separately, Japan and the UK announced in September that they were collaborating on a strong radar technology, which we may assume will be crucial to Jaguar. The United Kingdom and Japan are also working together to build an upgraded version of a long-range air-to-air missile. In addition, Rolls-Royce has recommended that the F-X and Tempest programmes, which are on fairly parallel timelines, collaborate on the development of a single-engine type.

In general, the US prefers to cover the entire expense of its most advanced research and development, initially keeping the resulting capabilities to itself and rarely informing even close allies. As a result of this approach, Japan decided to go with the UK in its efforts to accelerate the development of the new Aircraft.

The Biden administration has backstabbed so many allies and friends that one can lose count; be it Afghanistan, flip flops on Taiwan, abandonment of the Middle East & North African allies, or the classic case of Joe Biden’s betrayal of France and the European Union vis a vis AUKUS deal. Now, with a single deal, both France and the UAE have taken their sweet revenge on the Biden administration and its self-destructive policies. However, this made the allies realise how they were being taken on a ride all along, and now France and UAE have come together to take their own sweet revenge.

Read more: After getting backstabbed by the US, France steals an 80-Jets deal with UAE

In early December, the United Arab Emirates placed an order for 80 Rafale fighter jets and 12 military helicopters, strengthening economic and diplomatic ties with France through a 17 billion euro ($19.20 billion) arms purchase. As French President Emmanuel Macron began a two-day tour to the Gulf, where he visited Qatar and Saudi Arabia, the largest ever foreign sale of the French warplane was signed.

Also Read: France is planning to end US-led NATO as we know it

This was followed by an Emirati official telling Reuters that the UAE had already informed the US about its decision to suspend discussions for purchasing F-35 fighter aircraft, along with other defence equipment, under a $23 billion deal.

India has just begun receiving deliveries of the S-400 surface-to-air defence systems. Russia is the ultimate foe of Democrats, and the unprecedented defence and strategic partnership between New Delhi and Moscow prick Washington in the eye like a painful thorn. Yet, notwithstanding the discomfort and reservations of Joe Biden and his administration, the India-Russia bonhomie is being put on full display.

These developments show how disastrous the flip-flops of the US under Joe Biden towards committing to its allies has turned out to be. All the major allies, be it Japan, UK, France, or India, all have decided to reject Joe Biden and collaborate among themselves. This will provide a more consolidated foreign policy approach towards the common China challenge, which Joe Biden has given up on dealing with.