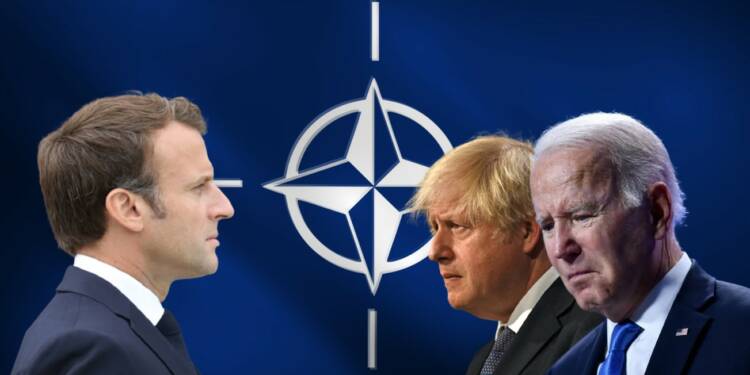 French President Emmanuel Macron is an ambitious leader. He has a clear plan- pull the European Union (EU) out of an era in which it stayed reliant on the United States of America for its security, and then lead an independent, autonomous EU.

So, Macron is planning an end of the US-led NATO as we know it, to bring in an era of strategic autonomy and independence in Europe. And what better time to execute such a plan than a change in guard at the transatlantic body.

Next NATO Secretary-General – what does France want?

While Macron is seemingly positioning himself at the centre of activity, he is really apprehensive of NATO’s role over two immediate causes-

When it comes to the AUKUS deal, French President Emmanuel Macron feels that he was backstabbed by the US and the UK.

Paris had brokered a deal estimated at $66 billion with Canberra in 2016 for the supply of a new fleet of submarines to the Australian Navy. But when Biden got together with the United Kingdom and Australia to launch the AUKUS initiative to arm the Australian Navy with nuclear submarines, Canberra decided to cancel its submarines deal with France. This is why he is becoming increasingly apprehensive of a US-led transatlantic alliance.

Besides, Macron has harboured ambitions of making Europe an independent power for quite some time now. In 2018, he warned that the Europeans could not be protected without a “true, European army”. This was an implicit warning against the NATO system that institutes a US-led alliance for Europe’s security.

Macron had said, “I want to build a real security dialogue with Russia, which is a country I respect, a European country – but we must have a Europe that can defend itself on its own without relying only on the United States.”

Regarding cybersecurity, the French President had warned, “We have to protect ourselves with respect to China, Russia and even the United States of America.”

Last year, he got a lot blunter about the need to cut dependence on the US and made it clear that in a post-Coronavirus world, Europe as a whole needs to be less economically beholden to China and the US.

How Macron is diluting NATO:

Remember, NATO was formed at the peak of the Cold War, as an alliance of the Western world against the Soviet bloc. In its purest form, NATO remains an anti-Russia organisation and this is how Joe Biden also presents it.

For leaders like Macron, who are more concerned with China today, NATO is fast turning into an anachronistic and irrelevant body. They are deliberately trying to give NATO a strong anti-China angle that will end up diluting its essence and basic structure.

By placing an anti-China hawk at the top position in NATO, Macron is thus trying to override the basic purpose for which NATO was created. And it does make a lot of sense. We know how Macron wants to create a European Army and how he wants to emerge as the tallest leader in the EU after former German Chancellor Angela Merkel’s exit. And for Macron, the process of leading a European Army to protect the EU starts with making NATO irrelevant and effectively meaningless.