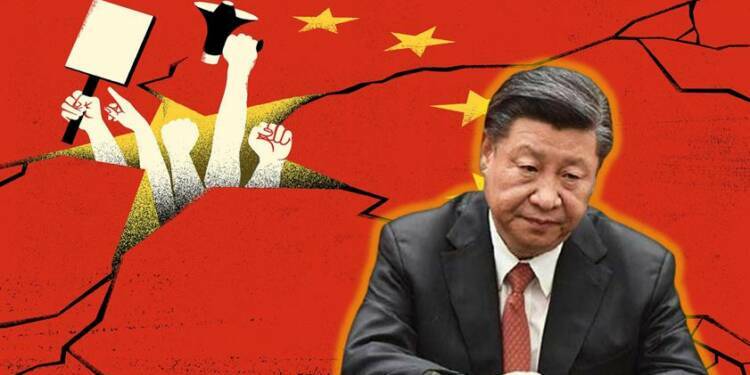 Strange things are happening in China. The State-owned media is not parroting Xi Jinping’s ultra-left, Maoist line. The People’s Bank of China (PBOC) is at crossroads with Xi’s economic mismanagement and censors, well they are simply not censoring enough.

For the past one year, Xi has been saying just one thing- I want “common prosperity.” He keeps cracking down on one private sector or the other. He simply doesn’t want the private enterprise to thrive in China and is working relentlessly on an economic model that can hark China back to the Maoist era.

Xi has a simple agenda- reversing the liberal economic policies introduced by former President Deng Xiaoping. But one of the most important CCP mouthpieces, People’s Daily, has published an article that militates against Xi’s hardcore Communism.

The story is titled, “Reform and opening-up is a great awakening of the Party.” The article is pretty long- it goes on for around 4,000 words but it broadly sends across the same message- how reform and opening up has helped make China great.

For the world at large, the era of China’s reforms and opening up had officially ended with Xi Jinping’s chilling crackdown on Alibaba and other tech giants last year, followed by curbs on EduTech entrepreneurs and real estate giants this year. However, the People’s Daily seems to be reversing Xi’s narrative.

And then, there’s another bombshell that the CCP mouthpiece has dropped on Xi Jinping. The story doesn’t mention Xi at all. Rather, it mentions Deng Xiaoping several times, and other reformist Presidents in China’s history- Jiang Zemin and Hu Jintao, too find a mention.

You might think that it is no big deal. Well, it is a big deal in Xi’s China. A Chinese State-owned publication doesn’t simply glorify former Presidents and advocate reform unless it wants to instigate rebellion and mutiny against Xi Jinping.

And guess, who authored the People’s Daily article? Well, it is Qu Qingshan, a high ranking CCP official and a member of the extremely powerful CCP Central Committee.

So, we have basically come to a level where a CCP official is using State-owned media to amplify criticism of Xi’s ‘common prosperity’ and other crackdowns on private businesses.

In November 2014, Russia’s President, Vladimir Putin, attended the Asia-Pacific Economic Cooperation (APEC) summit in Beijing. The Chinese First Lady, Peng Liyuan, who happens to be the wife of Xi Jinping, was probably feeling cold at the APEC summit venue.

So, behaving like a true gentleman, Putin placed a shawl/ coat on her shoulders. The footage went viral and the next thing you know, the Chinese censors jumped in and went wild to wipe the moment from the Chinese media landscape.

This is what the Chinese censors were always meant to be- sharp, efficient, and firmly in grip of the Chinese President. But today, Xi is not happy with the Chinese censors. The CCP believes they are not censoring enough; they are distributing anti-CCP content and launching a silent war on the CCP itself. So, they have to pay a price now. And the crackdown has already begun. Consider these numbers:

The data speaks for itself. China is censoring its censors now. And that’s not the only news. The CCP is also amplifying the media coverage of this crackdown. The message being sent out is loud and clear—you either please Xi Jinping or perish.

The point is. Xi’s biggest protective equipment- the censors have fallen into disrepair. And they are training their guns at him instead. No matter how much he censors the censors, anti-Jinping content is bound to carpet-bomb Chinese media sooner or later.

Xi versus the People’s Bank of China (PBOC)

Xi cracked down on all kinds of private enterprises and even cracked down on rival factions in the CCP. But did you ever think that he could crackdown on the country’s central bank, the People’s Bank of China (PBC)?

Well, this is exactly what is happening. In recent weeks, CCP discipline inspectors have visited PBOC headquarters in Beijing. They interrogated PBOC officials and reviewed documents, in a message by Jinping- PBOC won’t be allowed to exercise independence.

Like all other State institutions in China, the PBOC too is not independent. It is answerable to the Chinese Communist Party. And presently, Xi suspects the PBOC of having defied his tight regulatory measures and crackdowns. He feels that PBOC has introduced lax regulations in sectors like technology, entertainment, and education.

Read More: China’s banks are drying up and Jinping is hellbent on squeezing out the rest of the cash

In any case, the PBOC seems to be disillusioned by Xi’s disruptive decisions and policies that have imperilled the Chinese economy.

Xi has made too many enemies in China, with his radical and illiberal economic policies, as well as his crackdowns on rival factions. And thus, some of China’s biggest institutions are coming out to take down Xi in what seems like a full-fledged coup against the totalitarian leader.