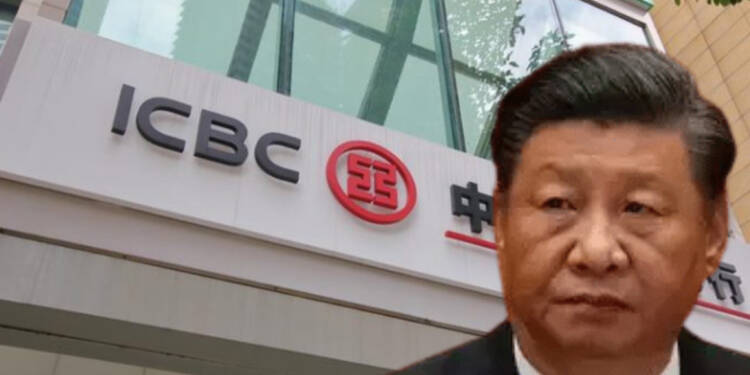 China’s biggest state-controlled bank called the Industrial and Commercial Bank of China (ICBC) has been now booked in Canada under the Proceeds of Crime and Terrorist Financing Act. Federal regulators have also fined the Chinese bank $701,250 for not reporting suspicious activities of a mysterious account. As per media reports, it is the largest fine of its kind this year.

As per Canadian financial laws, financial institutions are required to report all cash transactions of $10,000 or more to Canadian regulators. But, the Chinese bank chose to overstep the red line. It did not report the suspected transactions to the government of Canada.

As per the allegations by Canadian regulators, those transactions were related to money laundering and terror-financing activities. So, emboldened by Trudeau’s shameless prostration before the Xi Jinping administration, the Chinese bank in Canada didn’t even blink an eye before funding terrorists on Canadian soil.

The Industrial and Commercial Bank of China has got quite a powerful presence in Canada. It has its branches spread all over Canada, from Vancouver and Richmond to B.C., Calgary, and Toronto. Considering its recent actions, this Chinese bank is indeed a national security threat for Canada.

But, why is Canada the loser and victim every time? Why is Canada so spineless? The answer is Justin Trudeau. Chinese companies may continue to plunder poor Canadians of their wealth and assets, they may continue to fund terrorist activities in Canada, but Trudeau won’t bother to speak. That is a surety. Not every nation has a weak and spineless leader like Justin Trudeau, and that’s why Jinping loves Canada; even more than his evening snacks and his red punching bag.

‘Business as usual’ for Canada under Justin Trudeau

Only last month, it was reported that a Chinese telecom company named ‘China Mobile’ continued to be operational in Canada for six straight years even without informing the Canadian government about the same. It was the same company that got sanctioned in the US during the Donald Trump administration for having glaring ties with the Chinese military. Isn’t that curious; and equally harrowing at the same time?

Read More: How Trudeau went out of his way to save China Mobile from Trump’s wrath

And what did Trudeau do? Absolutely nothing! Instead of sending the company back home, the Trudeau administration funded it and nurtured it with massive economic support out of Canada’s Emergency Wage Subsidy program (CEWS), an initiative to provide pandemic wage support to Canadian businesses.

China’s support to Islamists and extremists

China is a global menace, which is in bed with Islamists from across the world. Its overt support to the Taliban in Afghanistan itself explains its evil intentions. In September, some China-linked Iranian businessmen were also sanctioned by the US, who were reportedly involved in funding Hezbollah terrorists in Lebanon. Apart from this, China had also allegedly funded and provided Hamas with deadly rockets and missiles during its 11-day war with Israel this May.

Read More: From Taliban to Hezbollah, China is empowering Islamists around the world

So, China joining hands with Islamists and funding terrorist activities overseas is indeed concerning news for the world; and especially for Canada where domestic Islamic radicalism is already on the rise. Justin Trudeau’s lax immigration policy has today made Canada a hub of radicals and extremists, consequences of which are already visible. The Canadian government has so far designated 13 groups as terrorist organisations this year alone; but until and unless Chinese companies are forced to pack their bags in Canada, this anti-terror crackdown would only yield undesired results. It’s high time the world realizes that to eliminate terror from the face of the earth, and the CCP needs to be eliminated first.

Not Santa, Jinping is coming this year to bring the Chinese Christians a present they will never forget

By debt-trapping Pakistan, Saudi Arabia has killed three birds with a single stone