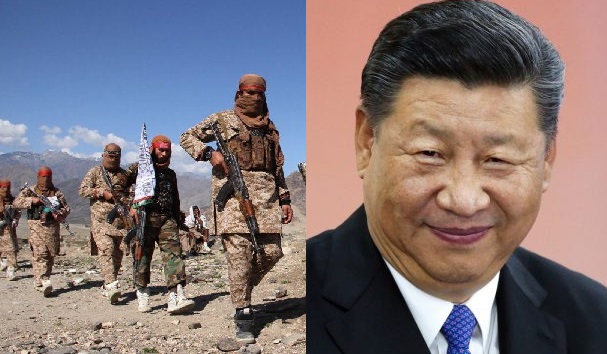 There is only one phrase that you can use to describe Chinese communism – hypocrisy with double standards. China is a hard-core communist nation and it hates religion. Beijing has tormented all religions, be it Tibetan Buddhists or Falun Gong practitioners. However, when it comes to tormenting religions, China hates the Uyghur Muslims the most and confines them in concentration camps in its Xinjiang.

So, China hates religion. There is no hypocrisy in Beijing‘s religion-hate, but it is highly hypocritical that China funds Islamist extremist groups like the Taliban, Hezbollah and probably even Hamas. Also, China uses Islamist regimes like Tehran and Islamabad to pursue its geopolitical goals in other parts of the world.

On Friday, the United States said that it was imposing sanctions on Lebanon and Kuwait-based financial outfits that fund Lebanon-based Shi’ite militant group Hezbollah. The US also announced sanctions against financial facilitators facilitators support Hezbollah and Iran.

It is a routine matter for the US to find new links connecting Hezbollah to Lebanon, Iran or Kuwait. However, there is a twist in the tale this time around. Among individuals targeted by the US Treasury is one Morteza Minaye Hashemi, an Iranian businessman based in China. He had funelled money into Iran’s Quds force. Beijing is even more deeply involved in this case- two Chinese nationals had helped Hashemi establish bank accounts and served as straw owners for his companies.

As per latest reports, the US Treasury Department has sanctioned several Chinese entities and individuals for financing Iran-related terrorist activities. The companies serving the Iranian businessman were based in Chinese mainland and Hong Kong. A total of seven Hong Kong-based companies have been reportedly targeted by the Treasury Department over Iranian and Hezbollah connections.

China’s Hezbollah connection may be a novel discovery of sorts, but a lot has been already said and written about Beijing’s Taliban connection. The Chinese Communist Party (CCP) is, in fact, a proud patron of the Taliban.

Also read: Akhundzada dead. Baradar in captivity. A massive fight has broken out in Taliban

The CCP has a specific goal to achieve by sponsoring the Taliban – it wants to protect its far Western province Xinjiang from any adverse action by the Afghanistan-based East Turkestan Islamic Movement (ETIM).

So, this is the relation- China supports the Taliban. And it wants the Taliban to avoid speaking about Xinjiang, where the CCP has currently interned innumerable Uyghur Muslims in concentration camps. Secondly, China wants the Taliban to rein in ETIM militants, who want to free Xinjiang from China’s clutches and establish an independent nation called East Turkestan.

As a result if its geopolitical goals, China is openly supporting the Sunni extremist group based in Afghanistan.

China’s linkages with Islamist groups for as far as Hamas. Iran evidently backs Hamas, but not many know that Hamas and other anti-Israel militias usually rely upon the Chinese military arsenal in hostilities against the Israel Defense Forces (IDF).

While Iran evidently backs Hamas, China too may have silently contributed to the ongoing Israel-Hamas hostilities. Palestine-China camaraderie is not new. Even in the Mao era, the paper dragon saw an opportunity in the Israel-Palestine conflict to advance its propaganda blitz against the Western world but abandoned its campaign due to lack of success.

In fact, during the latest Israel-Hamas military clashes, there were reports that pointed out how Hamas could have used ‘made in China’ military hardware in the ongoing Israel-Gaza conflict.

For China,supporting the Hamas or Hezbollah is a matter of geopolitics and strategy. China’s rivalry with the US is escalating constantly and at the same time, Beijing and Tehran are coming progressively closer to each other.

For China, the choice is clear- it prefers Iran, a US foe over Israel, a US ally. And when it comes to geopolitics and strategic goals, China doesn’t have any moral codes or ethics to follow. It does whatever it takes to achieve its strategic goals, even if it involves use of Islamist radicalism and terrorism.