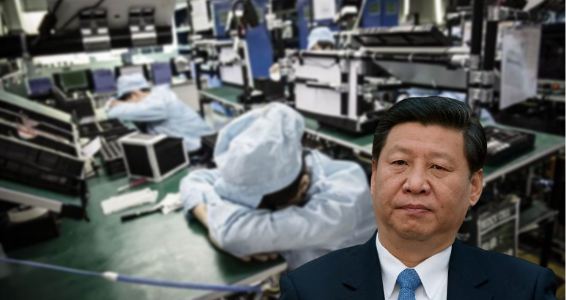 When you have to tell a story to your grandchildren in 2071, tell the story of 2021- the year when an evil regime called the Chinese Communist Party went down the drain. I know the CCP exists even today. But the power that made it big- the Chinese businesses are going to the dogs.

As per SCMP, 4.37 million of China’s smallest businesses permanently shut shop in the first 11 months of 2021. By comparison, less than 1.5 million new firms opened at the same time.

It is the first time in two decades, that the number of micro and small firms shutting shop has exceeded the number of such firms registering themselves.

Looking at China, it is easy to assume that it is a country of big companies. I mean tech giants like Alibaba, Tencent and Huawei became globally popular very quickly.

However, China is a country of micro and small enterprises. With over 40 million micro and small firms, the small-scale firms are considered the “backbone” of China’s private sector. And around one-tenth of such firms simply got wiped out last year.

In some strategic sectors, small-scale firms play a monumental role in China. The Chinese Steel industry, for example, is highly decentralised with hundreds of private steelmakers across the country. The larger producers of the strategic metal are mainly State-owned.

The large steelmakers capture less than 50% of China’s Steel production share and therefore it is the smaller private firms that make China’s steel industry big- so big that China came to produce over half of the world’s steel.

These small firms scattered across China’s industrial hotspots account for half of the country’s tax revenue, 60 per cent of its GDP and 80 per cent of urban employment. So, the CCP is dead if the micro and small enterprises sector continues to get wiped out.

Why are small private firms in China are disappearing?

Beijing talks about “threefold pressures”- contracting demand, supply shocks and weakening expectations. And at the end of the day, everything comes down to mismanagement by Beijing.

Xi Jinping has been drumming his “common prosperity” agenda for quite some time now.

Xi claims that he wants to bridge the wealth gap between the poor and the rich. Businesses perceive it as a warning- Beijing could nationalise private businesses to make the rich poor and bridge income inequality. And I am not joking, this is exactly what a Maoist Jinping wants. So, many businesses have simply decided that they should deregister, liquefy their wealth and somehow hide it from the CCP.

And then, the conditions in China are not business-friendly. The strict power rationing in China last year led to many food processing units and producers of important metals getting compelled to halt production.

Why would a manufacturing unit want to incur costs, when it can’t manufacture and make profits?

And Chinese authorities are even worse-off. They are browbeating local businesses with bogus tax, unfair penalties and extortion tactics. Such regulatory and physical crackdowns are destroying the will to do business in China.

Finally, China has failed to keep its infrastructure in good shape. Throughout 2021, Chinese ports suffered got jammed several times due to local Coronavirus outbreaks that went out of Beijing’s control. The recent lockdown in Xi’an and spike in COVID cases in Shaanxi province, the top-coal producing region in China, is likely to mount more trouble on smaller enterprises in China.

The fact remains that big companies like Alibaba and Tencent can withstand Xi Jinping’s mismanagement and vindictiveness. But it is the millions of smaller enterprises that are suffering badly and their downfall could as well mean CCP’s downfall.