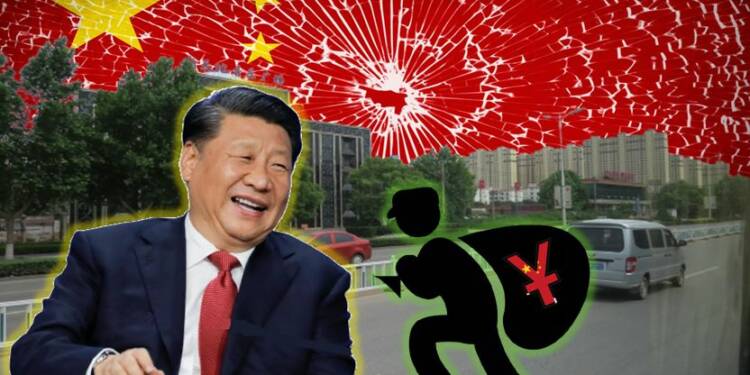 The Chinese economy is floating in troubled waters. The Chinese economy is getting bruised amidst a painful real estate crisis that has lowered consumer demand, disrupted supply chains, and led to low investor confidence. And this is making Chinese provinces desperate. They are in bad financial health and will do anything to stay afloat, including looting their own citizens.

The Chinese state-media has even coined a term for the Chinese economic downturn — “triple pressure”. Global Times, a Chinese Communist Party (CCP) mouthpiece known to write some crazy stuff like a ‘nuke disaster’ in the South China Sea, reported that a recent meeting of top CCP officials “specifically pointed out the triple pressure faced by the Chinese economy, namely shrinking demand, supply shocks, and weakening expectations.”

The State Council, China’s cabinet, issued an angry statement on Friday blaming the northern Chinese city of Bazhou for levying fines on businesses “without any reason or procedure” and also collecting unfair penalties without any rhyme and reason to ramp up non-tax revenue.

The city reportedly collected fines and fees from thousands of businesses to fill up its coffers. And while Xi Jinping is frowning upon the city administration, Caixin Global, a highly reliable private media source in China, had something else to say. It stated that the Bazhou episode “reflects the struggles of some local governments in making ends meet, as slowing economic growth and the troubled property market have bitten into fiscal revenue, especially that from land sales.”

How much has Bazhou city made with its fines

Located in the northern Chinese province of Hebei, Bazhou is a county-level city with a population of 750,000.

As a part of its efforts to fill a hole in its coffers, the local government officials conducted “carpet bombing” inspections throughout the city. With arbitrary fees, fines and unfair penalties in the garb of production safety and law enforcement, the city collected a whopping 67,183,700 RMB (approximately $10.5 million) from a total of 2,547 business owners. The fines were collected over a period of 67 days, so that was something lime a million RMB a day.

The local administration thus ensured that it extracts as much as possible from local businesses, and inspectors thus went wild with their actions.

What happened in Bazhou sounds something like daylight robbery. But what do you do when you don’t have enough money to keep going? In fact, the highly indebted local governments in China are finding different means to survive.

Even prosperous Chinese provinces and cities such as Jiangsu, Zhejiang, Guangdong, Fujian, and Shanghai are slashing salaries and allowances of their civil servants. A female civil servant from Zhejiang complained on Weibo, China’s microblogging platform, that her pay was cut by 25%, which is now affecting her daily expenses. We pray for her safety now.

But the austerity measures like pay cuts pale in comparison to a fine against Viya, China’s queen of live streaming. The tax bureau of China’s e-commerce hub Hangzhou in China’s Zhejiang will collect US$210 million from Viya for tax evasion.

Hebei is however not amongst the more prosperous of Chinese provinces. Hangzhou chose to fine one person and collected $210 million, while Bazhou collected over $10 million from thousands of businessmen.

The local governments in China were ridden with $3.97 trillion of debt at the end of last year. Experts however feel the true figure is significantly higher. There is also “hidden debt”, which is the result of local governments acting as guarantors for other organisations that borrowed money.

Meanwhile, the property sector downfall in China is making things worse. Land sales, a significant source of revenue for Chinese provinces, have gone down dramatically. Chinese land sales had soared to a whopping $1.3 trillion last year. The money generated through these land sales was equal to Australia’s annual Gross Domestic Product (GDP).

Also read: Not just Covid but another violent disease has put a whole Chinese city in lockdown

But the value of nationwide sales in China fell by a massive 17.5% on year in August. Chinese cities are going for a limited number of land auctions and in many cases, the plots on offer are either going without any bidders or are getting withdrawn. And when local governments fail to raise money through land sales, what do they do? Well they cut pay packages of civil servants, fine live-streaming stars, and carpet-bomb local businessmen with random fines.

China is training Tibetan children for military warfare. Not very far-sighted of Jinping