China’s local governments are set to collapse like dominos 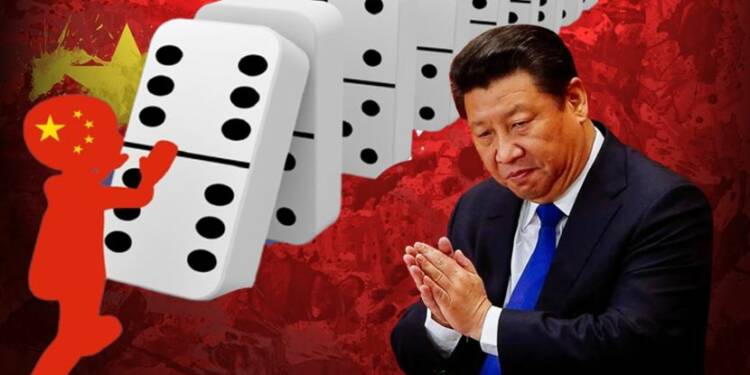 Chinese Communist Party (CCP) has created a monster just to decrease the vulnerabilities of Xi Jinping. While Beijing is somehow managing to keep its economy alive on life support, these persistent situations are making the local governments crack under pressure. China is one of the world’s most indebted significant economies, with both public and private debts. Worse, its state-owned banks, particularly in the real estate sector, are sitting on mounds of bad debts and non-performing loans. This economic catastrophe is bound to squeeze the funding to state governments, and as the resentment among the populace increases given the decreasing living standards, the local governments can start falling as dominos.

Banks in China have observed a decline in loan income, implying that non-performing loans are higher than stated. This fact is frequently concealed by Chinese banks reporting high profits. But, profits are subjective, and bad loans that have been moved off the balance sheet may not be included in the revenue minus costs computation. However, the ratio of interest revenue to loan volume is a strictly objective statistic which reveals that Chinese banks are not performing as well as they appear to be.

Local governments and a catastrophe in the making:

Over the last eight years, the debt value of these local government financing vehicles has nearly tripled. According to Goldman Sachs, “hidden debt” in China could be as high as $8.2 trillion, or over half of the country’s GDP.

Local governments have issued a record amount of bonds. They had a quota of $3.75 trillion in 2021, but the central government reduced it to $3.65 trillion in an effort to decrease debt. Even if bond quotas are reduced, debt is still piled on top of debt. 60% of the proceeds from these bonds were utilised to retire maturing debt rather than investing in infrastructure.

Selling land to property developers accounts for around a third of local government revenue. This puts local governments, developers, and banks in a situation where they are influenced to make more loans rather than less. Making dubious real-estate loans while carrying bad debts over to the following quarter has allowed banks to increase their on-paper earnings. According to some estimates, the property industry accounts for around 29% of China’s GDP and roughly 30% of all bank loans.

Since 2008, much of the expansion has been powered by debt – a potential problem that has been overlooked because job creation and rising living standards are priorities. Job creation, on the other hand, may be less of a motivator now, leading the CCP to be more ready to rein in debt and rein in areas of the economy that were permitted to run amok for the sake of greater growth.

All in all as things keep heading for the worse, and the bad loans keep mounting, the situation is looking grim. While the central government can manage the cash crunch to an extent, local governments stand too vulnerable, as Beijing keeps hiding all the bad loan underneath the rug of deceit.

Taiwan and India are hitting back at China with a wave of cyberattacks, CCP admits