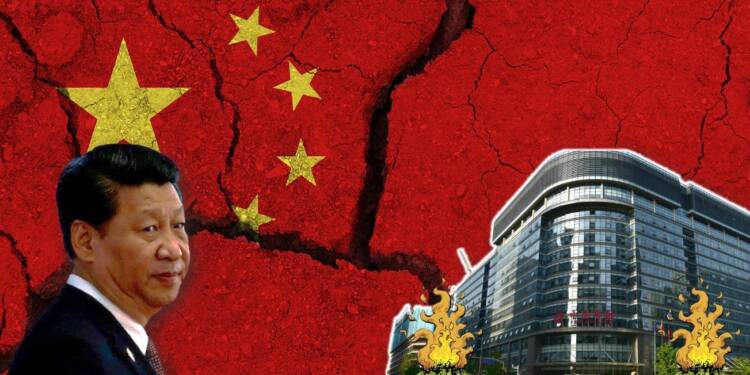 All the solutions to the economic catastrophe in China are turning out to be utter failures. It looks like any company or sector the Chinese Communist Party touches turns into ashes. The latest example is the China Huarong Asset Management Company. As the bad asset manager resumed trading following a nine-month suspension, the state-controlled investors who were forced to bail out China Huarong Asset Management Co. lost more than $4 billion on the first day.

Huarong’s stock dropped as much as 55% in Hong Kong as trading reopened after the company completed a $6.6 billion state-sponsored bailout last week. Huarong had grown into a financial conglomerate after the Asian financial crisis in the late 1990s when it was found to buy bad debt from the country’s faltering banks. However, last year when it failed to report earnings on time and eventually revealed it had lost about $16 billion in 2020, sending Asian credit markets in a scurry. Now even after being bailed out with the help of CCP, it has found no takers in Hong Kong.

History of the firm

Also read: ‘The Chinese bubble will not last,’ Jinping’s Alma Mater has a lesson for him

The bad-debt companies eventually grew beyond their basic goal, forming a network of subsidiaries to engage in other financial activities and borrow billions from the bond market. Huarong was the most aggressive of the four firms under former Chairman Lai Xiaomin, who was executed in January last year for crimes including bribery.

After the Ministry of Finance, Citic Group is Huarong’s second-largest shareholder, followed by China Insurance Rongxin Fund. Huarong secured a 42 billion yuan recapitalization from a consortium of state-backed investors led by Citic Group. It is also selling non-core assets to reduce its sprawling empire. Huarong proved to be too big to fail for Chinese authorities in a period of slowing economic development and mounting debt defaults, after upsetting Asian credit markets with a delay in results and a huge loss.

As part of its rescue plan, the business announced in November that it will get a $6.59 billion financial injection from a group of state-backed investors. But even after all this, the company has not been able to gain the confidence of the investors.

Everything that CCP puts its hand on decays and the year 2021 witnessed Xi Jinping comprehensively decimating the Chinese economy to shreds. The real estate sector that used to pump China’s GDP numbers has been hit by the Evergrande crisis and debt defaults by other property companies. Meanwhile, things are getting worse with a severe power crisis and President Xi Jinping turning into a radical Maoist leader.

Read more: Jinping hits the panic button as Chinese investors move their money out of China

What people in China fear is the growing likelihood of an action-packed campaign by Xi against the Communist nation’s private enterprises and businesses. They fear that the CCP will suddenly seize their assets and leave them impoverished. Over the past year, such sentiments have only got aggravated due to Xi’s wide-ranging crackdown on the tech sector, ed-tech companies, fintech real estate and other private businesses.

The nationalising tendencies of Xi Jinping are sending not only foreign investors but domestic investors as well have lost all hopes in the resurgence of China’s economy. This is one of the many reasons which have made sure that any attempt to make the companies that have been bailed out by the CCP have not able to gain the confidence of investors. This is the kind of perception that the CCP has created for itself, and this is why even the Chinese investors have dumped China Huarong Asset Management Co.