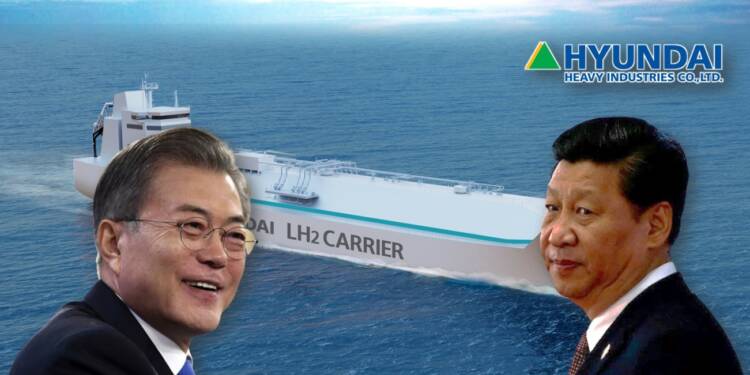 South Korea is the humble giant of the shipbuilding industry. Currently, out of the eight major shipbuilding companies, four are based out of South Korea. The combined revenue of these companies was USD 70.81 billion (as per 2016 annual revenue). The availability of human resource that has a deep understanding of the sector gives a decisive edge to South Korea. A combination of all these factors presents a nightmare to the ambitions of Xi Jinping and the Chinese industry to be at the top of this strategically important sector.

At a time when Beijing was still trying to comprehend the closing of South Korean shipbuilding giant Samsung’s Ningbo plant, now Hyundai Heavy Industries has also dealt a huge blow to the Chinese industry. HHI Group, the world’s largest shipbuilder by sales, announced Wednesday that it plans to lead the future shipbuilding industry by launching the world’s first self-driving vessel with autonomous navigation technology in the first quarter of this year. This single development has sent the whole establishment at Beijing in a scurry.

China’s shipbuilding industry is known for low-quality, high-quantity ship production. While this has helped the country gain substantial market share, when it comes to profit margins and sophistication of the products, South Korea is miles ahead of China.

Hyundai has sent Chinese Shipbuilding to the Middle Ages

Chung Ki-sun, CEO of HHI Holdings, said at a press conference, Wednesday that, “I am proud of the past 50 years of HHI Group, which has laid the groundwork for the growth of the world. In the next 50 years, we will become the world’s best ‘future builder’ and create new growth that is more sustainable, smarter and more inclusive, something we have never seen before.” He was addressing the audience on the first day of the Consumer Electronics Show (CES) 2022 held at the Las Vegas Convention Center (LVCC).

Avikus engineer Joo Hyo-gyeong described the company’s autonomous navigation technology as a vital technology that can lower the risk of marine accidents while also revolutionising maritime logistics and resource development.

The China challenge to the South Korean shipbuilding industry

China’s unparalleled expansion of naval power is backed by the world’s greatest sector. After designating shipbuilding as a “strategic industry,” China provided substantial support in the form of tax breaks, loans, and subsidies. However, one should understand that bulk does not always translate into quality. South Korea still maintains its superiority in the industry.

And for the future as well, South Korea has set lofty aspirations for its shipbuilding industry. It wants to gain absolute dominance over it within the next ten years. A new strategy released by the country this September is sure to irritate China, the world’s largest shipbuilding nation. The Ministry of Trade, Industry, and Energy of South Korea has set a target for shipbuilders to capture up to 75% of the market share for environmentally friendly boats with low or no carbon emissions by 2030, up from 66 per cent currently. It also aims for a 50% market share for autonomous ships in the same time frame, a market that has yet to be developed.

While it is slowly improving its capacities and quality, Seoul has also started inflicting damage to Beijing’s ambitions.

Last year, South Korean shipbuilding giant Samsung Heavy Industries (SHI) recently announced the closure of its plant Ningbo in the eastern Chinese province of Zhejiang, sparking days of protests by laid-off workers seeking better severance pay. The Ningbo plant, which opened in 1995, specialises in the production of ship blocks with iron structures as well as shipbuilding for both international and domestic markets. Each year, it produced and supplied about 200,000 tonnes of the blocks until Samsung pulled the plug.

The action by Samsung and the impetus by the South Korean government to the shipbuilding industry were already giving China nightmares. And now Hyundai Heavy Industries (HHI) Group’s Avikus’ autonomous navigation technology has brought South Korea back to its hay days of shipbuilding dominance — obviously at the expense of China.