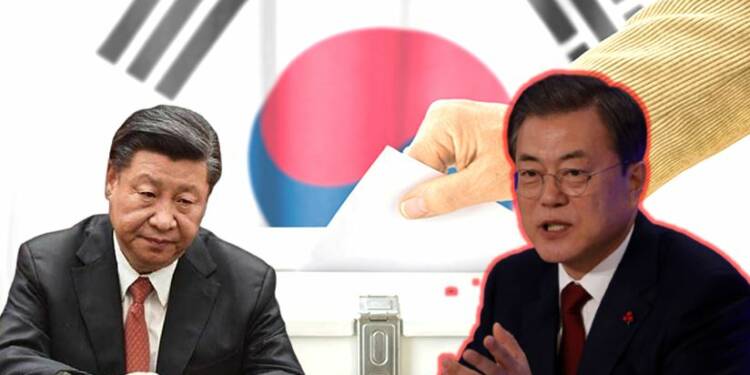 To understand how domestic developments influence the foreign policy of a country, one need not look any further than South Korea. It is a widely agreed fact that South Korean President Moon Jae-in and his leftist Democratic Party (DP) have been highly pro-China. However, the people of South Korea, especially the younger voters, have become extremely critical of Xi Jinping and the Chinese Communist Party (CCP). The reasons range from the attack on Korean cultural identity to the contribution of Beijing in the spread of the Covid-19 pandemic, as well as its belligerent actions in the past couple of years.

Now the presidential election in South Korea is set for March 9, 2022, and the main opposition – People Power Party (PPP), a party that has been consistent in its criticism of CCP, is leading the polls. Considering these developments, Moon Jae-in made a last-ditch effort to shed the image of being China’s friend, by making an in-person visit to Canberra to meet the Australian Prime Minister Scott Morrison and by signing a significant defence deal.

On Monday, South Korean President Moon Jae-in became the first foreign leader to visit Australia since the pandemic began, signing a $930 million defence deal. Before this, South Korea had also promised the Philippines (another enemy of China) a sale of equipment and ammunition from Seoul, in addition to military vessels and rocket systems.

South Korea and Australia signed a $930 million deal on Monday to build a howitzer factory in Geelong, Victoria, that will supply Canberra with 30 self-propelled howitzers, paving the way for defence cooperation between the two countries in the Indo-Pacific region as China expands its military presence.

The Capability Acquisition and Sustainment Group (CASG) and Hanwha Defense’s Australian business have agreed to develop a production base in Geelong by 2040 to provide K-9 Thunder howitzers and 15 ammo carriers. Hanwha has delivered around 600 K-9 howitzers to six countries so far. The signing ceremony took place during a meeting between South Korean President Moon Jae-in and Australian Prime Minister Scott Morrison in Seoul.

The announcement comes as a surprise, given the Moon administration has till now played the best friend of China. However, the fact that Moon Jae-in is collaborating with Australia, which has signed the AUKUS agreement with the United States and the United Kingdom, shows a change in foreign policy. By selling weapons, setting up a weapons manufacturing hub as well as technology transfer to Australia, South Korea has turned entirely anti-China. The only explanation which can justify this transition is the leftist Democratic Party’s attempt at winning back the disgruntled voters who do not like the Moon administration’s abject kowtow to Xi Jinping.

The Moon Jae-in administration has made quite a name for itself for going soft on China, even when the people of South Korea hate the CCP from their very guts. Sisain, a current affairs magazine, and pollster Hankook Research, revealed survey results in June that show a deterioration in South Korean public attitude toward China, particularly among the youth. Only 26% of respondents felt positive about China, compared to 57% who felt positively about the United States.

The South Korean people have been pushing back against Chinese influence in their country. Earlier in August, a tourist-focused project in South Korea’s eastern Gangwon province had to be scrapped so that public resentment could be managed. The project was being described as a “Chinatown” project by its opponents. In fact, some 500,000 South Koreans petitioned their government to cancel the project, which planned to showcase Chinese culture. While the trend was always present, the Moon administration took a lot of time to realise this and it will most likely cost the leftists the 2022 Presidential elections.

Lee Jae-myung of the ruling Democratic Party and Yoon Seok-yeol of the opposition People Power Party are the two front-runners for the position of President, but the opposition party is leading with a substantial edge. According to a Gallup poll conducted between November 2 and 4 (2021), 57% of respondents believe that “it is better to elect an opposition candidate to replace the government.” At the same time, 33% believed it was “better for the ruling party candidate to be elected in order to sustain the existing administration”.

In another Gallup poll conducted between November 16 and 18, 42% of respondents chose Yoon to Lee (31%) and two other presidential candidates from minor opposition parties, Ahn Cheol-soo (7%) and Shim Sang-jung (5%).  Lee’s ‘approval’ rating has been stuck at around 32%, while his ‘disapproval’ rating rose to 63% from 60% a month earlier, according to Gallup.

The conservative opposition party candidate running to succeed South Korean President Moon Jae-in in next year’s election has left open the potential of more American missile system installations, which China considers a threat. Yoon Seok-youl, a former top prosecutor for the People Power Party, said Seoul would have to consider “how much we boost missile defence systems like Thaad and how deeply we collaborate with the US and Japan [for defence].”

South Korea’s main conservative party has intended to adopt a tougher stance on China and place a greater focus on human rights in its foreign policy. This policy is not only in alignment with its Indo-Pacific allies but is also in consonance with the mood of the majority of the South Korean voters.

Based on all these observations, the Moon administration has realised how disastrous the pro-China policy will be in the upcoming elections. And thus, as a last-ditch attempt to wash the stain of being friends with CCP and Xi Jinping, he wants the defence deal with Australia to help change public perception before the elections early next year back home.

Putin dumps Jinping to give India S-500s first. Modi snubs Biden to go ahead with Russia