France threatens sanctions, Germany sends in warships: EU goes all out against China 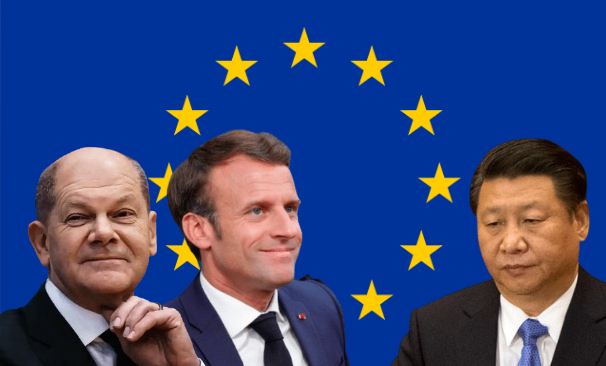 And you know what; it is now paying an explosive visit to China’s fiercest rival in the region. Yes, for the first time in history, a German warship called Bayern is visiting Vietnam, where it will carry out the military exercise with the Vietnamese Navy. The frigate is currently docked at the Nha Rong Port in HCMC.

German Ambassador in Hanoi Guido Hildner took the opportunity to mention the strategic importance of the closer German-Vietnamese ties. Guido said, “The visit shows the high importance Germany attaches to the partnership with Vietnam, and it will strengthen the partnership.”

After the end of its visit, Bayern will implement a PASSEX (Passing Exercise) exercise with the Vietnamese Navy. Partial exercises on communication, navigation, tactical formation sailing and rescue exercises could also be carried out.

After Vietnam, the German frigate will also pay similar visits to India, Japan, Australia, Korea, Guam and Singapore. The voyage itself reveals how Indo-Pacific has suddenly become a top foreign policy matter in Berlin.

Under the previous Angela Merkel administration, Germany had meekly surrendered its spine and pride to China; however, the Olaf Scholz administration is a cut from a different cloth! The foreign policy of the Scholz administration is being fronted by Annalena Baerbock, a great China-hawk! Baerbock has no qualms in naming China the biggest security threat for the Germans. She recently vowed to punish China for its miserable human-rights record as well.

The woman behind the tectonic shift

We must mention that Annalena Baerbock has upended the German weak foreign policy within a month of her assumption as Germany’s foreign minister. Her brave stance against China has also emboldened German security officials. For instance, the German navy chief this week pledged to send warships in the Indo-Pacific on a regular basis. That means it will soon become commonplace to see German warships scaring the living daylights out of the paper dragon in waters close to Beijing and Shanghai.

Until recently, the only major European power willing to stand up to China was France. Paris successfully led the charge against China by raking up issues like the Uyghur genocide and unfair trade practices. Recently, the Emmanuel Macron administration also threatened to sanction China over its brazen economic intimidation of Lithuania.

Consider this Chinese aggression: In reaction to Lithuania’s growing friendship with the island nation of Taiwan, China has cut Lithuanian imports and has also stopped importing such goods from other EU countries like France, Germany and Sweden that include parts from Lithuanian supply chains. But France looks in no mood to entertain such cheap economic warfare tactics deployed by the CCP.

French officials are reportedly in the works to enact a powerful anti-coercion instrument that will enable the EU to impose sweeping sanctions on China should the communist nation continue to harass Lithuania or any other EU member.

The EU has finally awakened to the China threat. It has finally broken the Merkel-era shackles to grow out as a strong challenge to China’s hegemonic attitude. Smaller nations like Lithuania will now feel more emboldened and confident. The EU is changed. The new EU is no friend to China, but a staunch enemy.

Transparent Nevada: How they keep check on the government

2022 was supposed to be a huge year for China’s SCO. Putin turned it into a huge nightmare