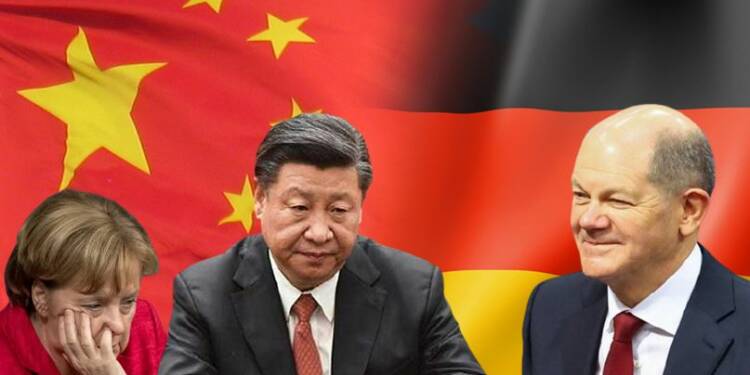 Angela Merkel is now a relic of the past. Having been in office for 16 years as Germany’s Chancellor, Merkel drove Germany so close to China that the country began burning, without being able to decouple itself from the communist monster. But now, a change of guard has happened. Germany has a new Chancellor in the form of Olaf Scholz, and a new coalition government has taken charge of Germany with the single mandate of making China’s life miserable. The Chinese Communist Party (CCP) has been having a blast in Germany for the past two decades. Now, China is all set to be kicked in the shins by Germany’s new coalition government.

Germany’s Social Democrats (SPD), Green Party (Greens) and Liberal Democrats (FDP) have entered into a coalition government. The three parties recently presented their long-awaited agreement, and this document promises to be the end of China’s fortunes not just in Germany, but within the European Union (EU) as a whole.

What does Germany’s coalition agreement say?

On Thursday, Olaf Scholz took charge as Germany’s Chancellor from Angela Merkel. His government is wasting no time in rounding up China. In a ‘Coalition Agreement’ signed by the new German government, it has been laid out that China will be treated as a “systemic rival”. This is for the first time that Germany has referred to the red rogue nation as a systemic rival.  The agreement also commits to working out a “comprehensive China strategy” as part of the joint EU-China policy, “to be able to realize our values ​​and interests in the systemic rivalry with China.”

Also read: Are China-Germany Ties likely to get sour?

The document also calls for the international participation of “democratic Taiwan”, points to human rights violations in Xinjiang, and demands a restoration of the “one country, two systems” policy in Hong Kong. Most importantly, the coalition agreement – which has laid out the new government’s broad policies, targets China by calling for greater scrutiny of foreign investments in Germany’s critical infrastructure.

The new German government will have its foreign policy led by the Greens Party – which is by far the most China-skeptic party in Germany. Its leader, Annalena Baerbock has been made Germany’s new foreign minister, and she is not pulling her punches in any manner.

In an interview, Foreign Minister Baerbock said, “In the long run, eloquent silence is not a form of diplomacy, even if it has been seen that way by some in recent years.” Barbock made it clear that the new coalition government would not continue the course Angela Merkel pursued during her 16 years at the helm.

In the Tageszeitung daily newspaper, Baerbock called the People’s Republic of China a systematic competitor and urged “strategic solidarity with democratic partners, defending our values and interests together, and patiently advocating these values in our foreign policy.”

So far, six countries have announced diplomatic boycotts of the Winter Olympics to be held in Beijing next year. These are the United States, United Kingdom, New Zealand, Canada, Australia and Lithuania. And Germany could be the next. When asked about the upcoming Beijing Olympics, Baerbock declined to rule out a boycott. She said, “Considering how the Chinese leadership has been treating tennis player Peng Shuai or the imprisoned citizen journalist Zhang Zhan, we should definitely take a closer look at the Olympic Games.”

Germany boycotting the Winter Olympics, speaking up on China’s human rights abuses and its harassment of Taiwan, while also economically decoupling from Beijing, will most definitely end up rendering Xi Jinping sleepless.