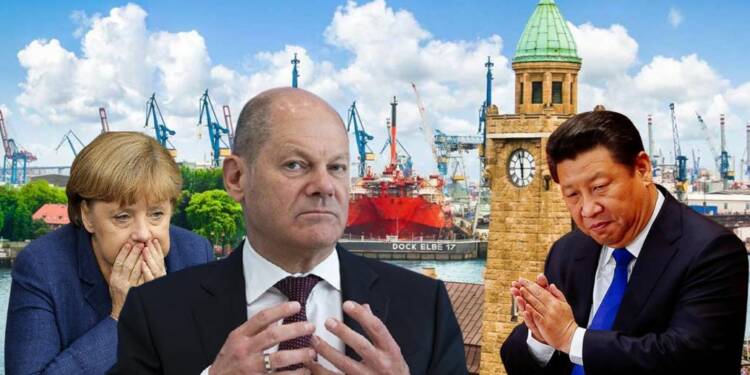 The inconclusive polls in Germany, in which no party could win a majority, created a lot of suspense. However, it is now becoming clear that Olaf Scholz is likely to be installed as the next Chancellor of Germany, very soon.

Beijing is desperately wanting Olaf Scholz to be as friendly a German Chancellor as Angela Merkel used to be. However, it seems that things are not going to go China’s way, as Scholz faces three main factors which will drive him into becoming a China hawk of sort:-

Scholz’s coalition partners will force him to turn anti-China:

Olaf Scholz doesn’t seem like a China hawk. He had served as the Vice Chancellor and Finance Minister under the China-friendly Angela Merkel regime. In fact, he had also served as the Mayor of the port city Hamburg, which markets itself as China’s gateway to Europe.

However, Olaf Scholz has two allies backing him up:

Beijing is expecting Olaf Scholz to be pro-China. He is viewed like a China enthusiast, especially due to his meeting with Xi Jinping in 2017. On September 26, Chinese Communist Party (CCP) mouthpiece Global Times wrote, “Chinese observers said Olaf Scholz shares abundant connections with China, and the new government will be more likely than others to continue Merkel’s policy.”.

Olaf Scholz may be a China enthusiast but he will be leading an anti-China coalition which would make it a political compulsion for him to act against China’s interests.

Germany and France established good ties in the post-World War II era. However, the two leaders of countries remain ambitious about their desire to lead the European Continent. Presently, Germany is the biggest economy in the EU and therefore Merkel functioned as the de facto EU leader.

However, with Merkel’s inability to take on China, French President Emmanuel Macron has been taking a stern stand against the communist nation. Macron wants to overshadow Germany and revive France’s old glory. He is ready to play the leadership role by pushing back against China and cooperating with Indo-Pacific powers like India and China.

Olaf Scholz will face an uphill task of reversing the gains Macron is making, by emerging as the biggest anti-China leader in Europe.

With a new set of anti-China leadership emerging in countries like Lithuania and Czech Republic, Europe will accept only a China hawk as its de facto leader. Olaf Scholz will have to show that he is a bigger China hawk than Macron, in order to ensure that France doesn’t replace Germany as the main power guiding EU policies.

Hamburg port and overdependence on China:

German overdependence on China is becoming pretty clear. No one will understand it more than Olaf Scholz himself, who is a native of Hamburg and had served as its Mayor from 2011 to 2018. The bilateral trade between Germany and China reached $258 billion in 2020, and China enjoys a massive trade surplus of $20.24 billion over Germany. In 2019, half of the Chinese trade into Germany passed through the Hamburg port, making it China’s gateway into Germany.

Now, China’s state-owned COSCO Shipping has struck a deal to buy a stake in one container terminal at the Hamburg port. This is raising concerns of growing Chinese influence in German ports, which is already going out of control. In 2019, DW reported that Duisburg, which has the world’s biggest inland port, was strengthening its ties with China.

Also read: A new set of leadership in Europe has the potential to turn it into an Anti-China bloc

Gabriele Rüken, Principal of the Max Planck High School in Duisburg, even said, “The trend is clear: We must work together with China.” She added that the city had already developed “close cultural and economic ties.”

However, Chinese businesses are now growing skeptical about the increasing Chinese influence. Doris Hillger, head of the foreign trade department at Hamburg Chamber of Commerce, said, “Any deepening of interaction with China is from the start viewed more or less critically.”. She added,  “And that’s what makes it very difficult for businesses, but also for business locations such as a port city like Hamburg.”.

German ports and businesses are concerned about US-China geopolitical competition. And then, there’s also this issue of Chinese economic crisis. Chinese manufacturing activity has gone down drastically due to its energy crisis and tight regulations. If German ports get highly dependent on China, then any large-scale disruption in the communist nation will squeeze Germany’s supply chains and also hurt the overall economy of its ports.

Merkel often used the excuse of trading relations and business interests to encourage closer ties with China. But Olaf Scholz won’t get the liberty of taking this excuse, given the ongoing economic crisis in China. In any case, a huge crackdown against China is set to begin in Germany starting with China’s gateway to Europe – the port city of Hamburg.