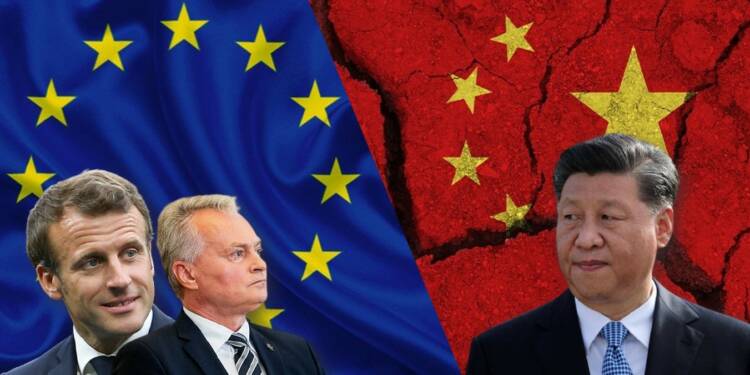 Big things happen when French President Emmanuel Macron gets the leadership role. France just took over EU Presidency for six months and big things have started happening already. In fact, the France-led EU could go as far as slapping sanctions on China, as the latter continues to stay engaged in a trade war with Lithuania.

France-led EU in a hurry to sanction China

France wants the EU to respond quickly to Chinese actions against the tiny Baltic nation of Lithuania and the European Union. In reaction to Lithuania’s growing friendship with the island nation of Taiwan, China has cut Lithuanian imports and has also stopped importing such goods from other EU countries like France, Germany and Sweden that include parts from Lithuanian supply chains.

Meanwhile, the EU is planning to bring in an “anti-coercion instrument” to retaliate in such cases but fresh legislation could take years to come into effect and Macron cannot wait to punish China.

Also Read: China was playing the European Union for years, now the EU is playing China

China will be made to pay for bullying Lithuania

China is being made to realise that it is no longer a power that can use its economic might to coerce tiny nations into submission.

Lithuania has been provoking China continuously. In May last year, it pulled out of the “17+1” group, a China-led initiative with Central and Eastern European countries.

And then some bigger shocks came China’s way. Lithuania asked its citizens to throw away existing Chinese mobile phones and avoid buying new ones, because of censorship concerns.

Then, Lithuania also openly elevated its ties with Taiwan. In fact, Taipei and Vilnius have opened diplomatic offices in each other’s country. This was perhaps the biggest acknowledgement of the island nation of Taiwan by an EU country in several decades.

When China threatened to launch a trade war against Lithuania, Taiwan came to its defence and vowed to create a $200 million fund in the Lithuanian industry and boost trade. China was therefore left fuming. Lithuania has dared to acknowledge Taiwan and the EU seems to be doing nothing about it.

In fact, Lithuania’s provocations against China have France written all over them, given how Paris has started backing Lithuania right after assuming the EU presidency.

For French President Emmanuel Macron, the EU presidency is a big opportunity to act and settle scores with China.

China has been trying to harm France for several years now. And the main issue between Paris and Beijing is New Caledonia- a French overseas territory located in South Pacific.

The archipelago of New Caledonia is a strategic location being located close to China’s regional rival- Australia. Also, the archipelago is home to about 10 per cent of the global reserves of nickel, an important raw material used in making stainless steel, batteries, mobile phones, and electric vehicles. This is why the paper dragon has been trying to ramp up its influence in New Caledonia at France’s expense.

It is suspected that China supports an independence movement in New Caledonia, in order to wrest French control over the strategically located archipelago and bolster its own presence instead. This is what seems to have made Macron incredibly angry.

France has already secured New Caledonia by winning all three independence referendums held in the territory. And now, it is France’s turn to hit China and Macron has also found a stick to beat it with in the form of Lithuania.