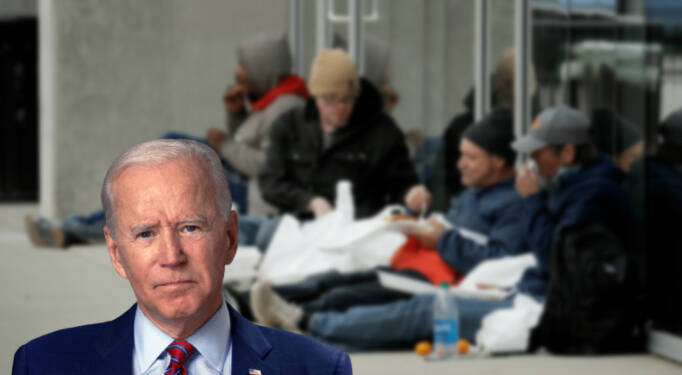 The United States has a big problem. And that’s the problem of homeless people. Usually, local governments across the U.S. try to help homeless people before the excruciating winter months step in. Having people out on the roads without food, clothes and proper accommodation can quickly spiral into such people losing their lives on the streets due to intense snowstorms.

But Democrats are heartless. They claim to be pro-poor, but in reality, cannot stand the sight of homeless Americans. This is precisely why homeless people are beginning to set base in prominent locations of Washington DC.

That’s right. The capital city of the world’s most powerful and advanced nation has a crippling problem of homeless people, which the local Democratic leadership is least bothered to solve.

Down the street from the US Capitol Building, right in front of Union Station, several dozen tents have been erected. The area outside the train station is a 16-minute walk from the Capitol Building.

Biden's america DC Washington state , these homeless have no chance of moving pic.twitter.com/vCTCozIJAn

This is the scene outside Union Station. Dozens of tents serving as a reminder of how bad the homeless crisis has gotten in this city. pic.twitter.com/21u6SBKWLU

Washington DC – our nation's capital – a city run by Democrats. The entire city looks like this. pic.twitter.com/Y6rYooybt5

Washington DC has been battered by two snowstorms and an unforgiving winter chill in recent days. Yet, the democratic leadership of the city is least interested in providing help to homeless Americans. It must be remembered that national lawmakers, belonging to the Congress walk down the road from Union Station to the Capitol building daily.

Yet, they have not provided any help to the homeless people who have set camps across the Capital’s most important areas.

One would have thought that if Democrats cannot help the homeless constituents of their cities, they would at least show the decency to not strip them off their camps in these winter months.

But expecting the slightest iota of compassion and humanity from Democrats is childish. Democrats have cleared the way for homeless people to be evicted from Washington DC. Where such people will be transferred after eviction, or what sustenance they will be provided, is still unclear.

The D.C. Council late last month (December 2021) rejected an emergency bill aimed at restricting Mayor Muriel E. Bowser’s authority to remove homeless encampments. According to the Washington Post, the bill would have paused all encampment evictions through the end of the district’s coldest months and established a formal process by which homeless residents could challenge officials’ decision to remove them from sidewalks, parks or other public spaces.

Yet, it was rejected, showing just how much the Democrats cared for America’s most vulnerable and impoverished communities.

As you all know, Joe Biden and Kamala Harris are leading the most disliked administration in U.S. history. A newly released Gallup Poll showed on Tuesday that only 44 per cent of Americans approve of Harris’ job as U.S. Vice President, which is a fall of 5 percentage points since the agency last recorded her job approval ratings. Meanwhile, only 43 per cent of citizens approve of Biden’s job as President.

Joe Biden has led the United States into an economic downturn. Inflation has skyrocketed under his watch, and ordinary Americans now find it difficult to find essential items on grocery store shelves. Commodities are becoming more and more expensive – thus exacerbating the woes of poor Americans. The condition of homeless people, meanwhile, simply cannot be described. Joe Biden’s presidency has made things all the more terrible for them.

Read more: So, Biden did have a plan after all. Get migrants first. And make them voters next

Interestingly, while homeless Americans continue to suffer on the streets and face the threat of having their camps torn apart by Democratic administrations, the Biden team is letting illegal immigrants into the U.S. and shifting them to the mainland.

Soon, these fence-jumpers will become voters in the United States – establishing a near-Democrat monopoly over the country.

The visuals coming out of the American capital city are disheartening. They show how one year of Joe Biden’s presidency has made things worse for America’s poor population. Unfortunately, the Biden administration couldn’t care less.