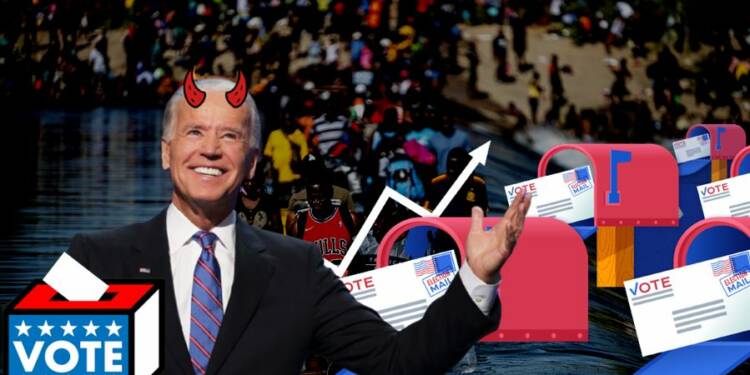 What is the most insidious solution to gaining voters when the whole of America is tired of you? Just bring in enough immigrants, place them into cities strategically, provide them doles & freebies and voilà – you have yourself a vote farm. In line with this, the New York City Council is expected to enact a law allowing around 800,000 immigrants who are not US citizens to vote in local elections. The “Our City, Our Vote” legislation would ensure that migrants who hold green cards, migrants who maintain a legal work status in the United States, and DACA (Deferred Action for Childhood Arrivals) participants receive special voter registration forms that can be used to obtain a local-only ballot at the polls.

We at the TFI have time and again reported extensively on how instead of solving the crisis and sending these people back to Haiti, the Biden administration used the hard-earned money of its citizens to relocate the illegal immigrants into different American cities and states.

Reports on the pumping of illegal immigrants in New York:

The New York Post has uncovered that loads of teenage migrants are being discreetly flied into suburban New York, in an effort by President Biden’s administration to quietly resettle them across the region. According to sources familiar with the situation, the charter flights originate in Texas, where the ongoing border crisis has overwhelmed the local immigration officials. They have been in operation since at least August. And now we know exactly why.

The law is beneficial for Democrats (according to one councillor, Ydanis Rodriguez), who can use it to spread the talking points that “voting rights are being challenged” across the country. “It’s critical for the Democratic Party to look at New York City and see how, even when voting rights are under attack, we’re increasing voter engagement,” Rodriguez said.

Republicans, on the other hand, are already battling Democratic initiatives in other parts of the country to make non-citizen voting permanent. The Republican National Committee said in October that it would challenge Montpelier and Winooski, Vermont, for changing their town charters to allow non-citizens to vote in municipal elections.

The statistics of the border crisis:

According to the US Customs and Border Protection, the number of “border contacts” in August 2021 was 208,887, up 106% from February and 317% from a year before. Fox News was the first to report on the August border apprehension number, which was released before it was posted on the CBP website.

Also read: Biden is flying Haitian migrants to New York, Florida and other parts of the US, instead of deporting them

According to the website, 101,089 border interactions occurred in February 2021, roughly one month after the new government of Joe Biden took charge of the office on January 20, 2021.

If you cannot win votes, make the immigrants the new voters:

“Democrats are attempting to undermine the credibility of our elections.” Democrats want foreign citizens to vote in American elections, in addition to opposing generally supported measures like voter ID. Republicans are fighting back against the left’s far-assault on election integrity, because, unlike radical Democrats, we believe that our elections should be chosen purely by Americans. This is a matter of principle, and we will fight to keep it that way in all 50 states,” said RNC Chairwoman Ronna McDaniel.

This has been a norm in many developing countries as well as failing states where authoritarians or leaders with authoritarian tendencies try to create vote farms and capitalise on these demographic changes to secure their position. By doing the same, Joe Biden is proving his hate for the average American, and showing his true face of a compromised US President who is willing to go to any lengths to keep his hold on power.