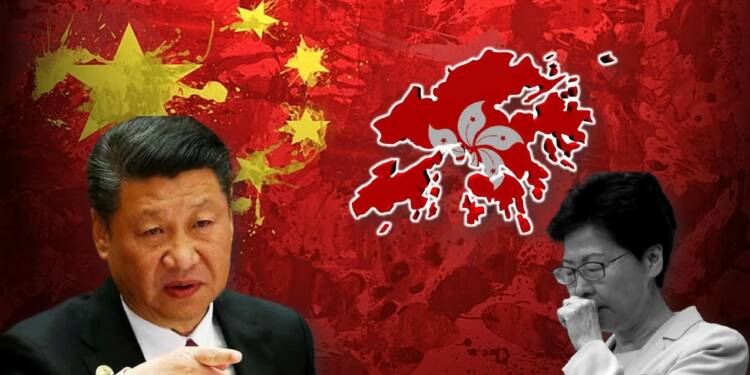 An authoritarian leader can never be wrong. Any deficit of strength is directly related to losing the whole fortune at once. And Xi Jinping is well aware of these factors, he knows the more the centralisation of authority, the more eyes will directly look at him for answers. However, in addition to this, we must not forget that Xi Jinping is paranoid beyond redemption. This is why he always tries to find scapegoats whenever any of his policy decision fails to fructify.

This time, it is Hong Kong’s Chief Executive Carrie Lam who is being scapegoated for the failures of Xi Jinping and CCP to achieve their intended objectives in Hong Kong. As reported by SCMP, on 23 Dec 2021, that Chinese President Xi Jinping’s praise for Hong Kong’s leader was carefully worded. In comparison to complimentary remarks made in meetings with Macau’s top executive, state authorities appeared to be more circumspect in praising Carrie Lam Cheng Yuet-ngor and the Hong Kong administration’s efforts on Wednesday.

The reasoning behind it is really obvious, but at the same time, not something most of the analysts will be considering.  For long Xi Jinping has intended to replace Hong Kong with Shenzhen as the business capital of Asia. However, the sacrifice of Hong Kong has paid dividends to an entirely different country, Singapore. Singapore has become the most sought-after business location for companies moving out of Hong Kong and not Shenzhen.

As per the intentions of Xi Jinping, Shenzhen will serve as the core of the Greater Bay Area, an integrated territory that includes Hong Kong and Macau, according to Chinese Communist Party (CCP) leader Xi Jinping. Hong Kong would be ignored under Xi’s strategy as China concentrates exclusively on expanding Shenzhen.

However, this policy intention failed spectacularly. In one survey, the American Chamber of Commerce said more than 40% of its members were considering leaving Hongkong. While the Chinese Communist Party was expecting the businesses leaving from a burning former British colony to integrate more with China by coming to Shenzhen, they have instead been moving to Singapore.

In such a situation, the supreme leader cannot be blamed and therefore, it is the Chief Executive of Hong Kong who will be forced to take the blame for not doing enough.

What did Macau do differently to gain the praise of Xi Jinping?

Xi seemed more lavish with his compliments during his meeting with Macau leader Ho Iat-seng. “In the past year, Macau has effectively tamed Covid-19, and maintained a normal flow of people with the mainland … The groups facing difficulties and small enterprises received help, and the systems and mechanisms safeguarding national security have been improved continually,” Xi said.

Rather than focusing on the changes in language, Eilo Yu Wing-yat, a political scientist at the University of Macau, said he was more interested in how Xi highlighted the Hengqin economic development plan in his meeting with Ho.

As per reports, in September, Beijing announced a new cooperation zone for Macau with neighbouring Hengqin and urged the casino hub to develop new industries, such as finance and technology, in the new zone.

On the other hand, Xi Jinping praised Hong Kong’s leader in the Covid-19 ballot but said nothing about the border situation. It is obvious that while he is happy with the way in which economic prosperity is being transferred from Macau to the neighbouring Hengqin, he cannot accept the fact that businesses and talent from Hong Kong are not going to Shenzhen.

Although, there is little Carrie Lam could have done. Given the brutal takeover of the city-state by CCP there was no chance that the businesses and talented human resources in the city will believe in the Shenzhen dream. But, as mentioned earlier, the supreme leader cannot be wrong. So, there is only one person who can be used to feed the paranoia and vulnerability of Xi Jinping and that is Carrie Lam.