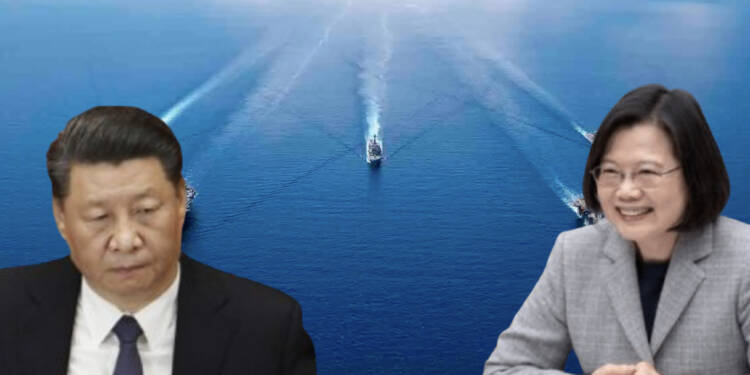 Taiwan is turning the South China Sea into a graveyard for Chinese warships and vessels. And that means the Chinese navy will blow up even before reaching Taiwanese soil midway in Taiwanese waters. That’s because Taiwan is sowing a large number of mines in Chinese waters at a mad pace.

Taiwan’s mine warfare against China

Taiwan on Friday commissioned new navy minelayers to add to its defences to counter the rising threat of Chinese invasion. President Tsai Ing-wen herself presided over the commissioning ceremony for the navy’s First and Second Mining Operations Squadrons. Yes, the Taiwanese navy is going to have a separate squadron for mining operations.

These squadrons will sow a large number of small but very powerful mines in waters around Taiwan. Also, they will lay down these mines at a fast pace without even the need for divers. Taiwan is doing this for three main reasons.

Three reasons behind Taiwan’s mine warfare

First, Taiwan wants to deter a Chinese invasion. The explosive mines will prevent Chinese ships from sailing towards the island nation. And if they dare to do so, they won’t remain alive to see the end results.

Second, Taiwan is eyeing to boost its defence industry. For instance, the ships being used by these mine squadrons are built by Lungteh Shipbuilding Company, which is a major player in Taiwan’s arms industry.

Third, Taiwan is seeking to downsize its reliance on the US defence regime. Under the Joe Biden administration, Taiwan has grown sceptical about the USA’s will to brave China in any case of military invasion. So, Taiwan is becoming self-defendant now.

Indeed, the People’s Liberation Army Navy (PLAN) is equipped with modern warships and frigates, but it still lacks the capability and required skills to execute a full-scale invasion of Taiwan. Furthermore, Taiwan’s mining warfare will utterly neuter the PLA Navy’s fighting abilities, thus making it harder for China to launch an amphibious assault against Taiwan.

Taiwan is also producing and deploying two anti-ship cruise missiles that could pose a significant threat to the ships of an invasion force. For instance, the HF III is an indigenous supersonic cruise missile capable of striking ships or land targets, with a range sufficient to strike targets on the Chinese mainland.

As far as the threats of Chinese aerial invasions are concerned, Taiwan is also rapidly bolstering its defence capabilities. The nation has made big investments in the Harpoon coastal defence cruise missile system and the Stinger man-portable air defence missile system. Apart from them, Taiwan’s Tien Kung III defence system and the USA’s Patriot PAC-3 will also help Taiwan shoot down any flying threat coming from Chinese soil.

All in all, Taiwan is making sure that PLA’s inflated ambitions of taking over Taiwan end up in massive causalities and eventually an embarrassing retreat of the Chinese military. Taiwan is clearly feeling more confident and emboldened after the open support being imparted by governments like Japan, Australia and India.

Read More: China cannot dare to invade Taiwan and it is for this secret weapon

These democratic countries are not only bolstering Taiwan’s defence capabilities but also helping Taiwan grow its economic muscles. Taiwan is rapidly expanding its red-hot semiconductor industry to make China excessively reliant on Taiwan-made electronic chips. This way, any Chinese military adventurism will result in crippling the communist nation’s own supply chains, and that will bear grave consequences for the Chinese economy.

Taiwan may look like an ant-sized rival against the mammoth called China; however, Taiwan’s resolve to put an end to Chinese tyranny is simply unparalleled. So, if the PLA wants to remain afloat in the hotly contested waters of the South China Sea, it must steer clear of the Taiwanese waters. Otherwise, Taiwanese mines will turn the Chinese contested waters of Taiwan into a graveyard of Chinese PLA and Xi Jinping’s ambitions.