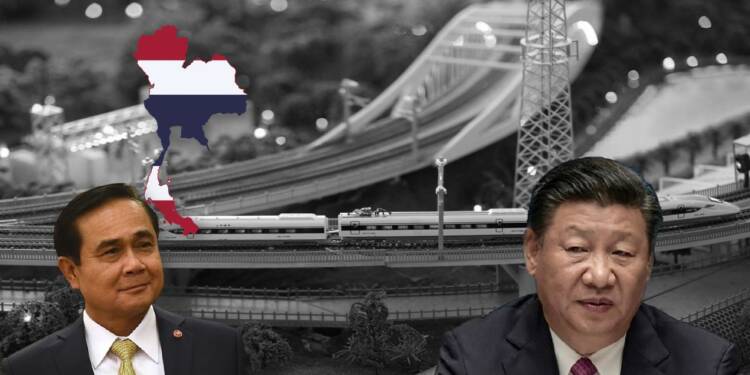 Countries like Vietnam, Indonesia, Malaysia, Singapore and the Philippines have been snubbing Chinese investments. But it is only natural. All these countries share historical and territorial disputes with China, and they are doing their bit in taking down the Communist giant. However, even a country like Thailand that used to be close to China is developing cold feet towards Beijing.

In fact, Thailand is giving up a Chinese project to bypass the Strait of Malacca by building a pan-Asian high-speed rail line. So, what is this rail line all about? And why is Thailand abandoning it?

China has been planning a pan-Asian high-speed rail line transiting the Indochina region. For this purpose, China has planned high-speed rail projects in Laos, Thailand, Malaysia, and Singapore.

Ultimately, China wants to connect Kunming in its Yunnan province to Singapore by rail. This will help China in creating a secure land transport route that can serve as an alternative to the present shipping routes passing through the South China Sea and the Strait of Malacca. China feels that this will be a safer trade route as the marine shipping route currently used by Beijing is susceptible to naval operations by India.

China is so desperate that it keeps finding new ways to somehow bypass the Strait of Malacca. Till now, it was trying to get Thailand to allow Beijing to build a canal project in the country called Kra Canal.

Also Read: Kra Canal: China is creating another naval route to escape a blockade by India and only Thailand can stop it

The 120-km long Kra Canal was supposed to through the Isthmus of Kra in Thailand, which would have helped Beijing solve the “Malacca dilemma” by opening up a new route connecting the South China Sea and the Indian Ocean. However, Bangkok shot down the project after it realised that Beijing was trying to debt-trap it and the Thai public started opposing mounting Chinese influence in the country.

However, Kra Canal was just the trailer. Thailand has now given an even bigger shock to China.

In December last year, China had succeeded in operationalising the China-Laos high-speed railway line. It seemed that China may be able to construct the pan-Asian high-speed rail. However, the big Belt and Road Initiative (BRI) project needs Thailand’s assistance as only Thailand can help the Chinese rail line reach Malaysia and Singapore.

However, Bangkok doesn’t seem too keen on the project. China has been pushing the Thailand government for a 608 km rail link connecting Bangkok with Nong Khai province in the country. Originally, China wanted to build a rail line that would carry passengers and cargoes at a maximum speed of 180 kph. Beijing even got Bangkok to sign an agreement in 2015. The project was expected to connect Thailand and Laos and form an integral part of the BRI.

However, by the time construction began in 2017, Thailand had changed its mind. The Southeast Asian nation got upset by the unfair loan conditions set by the Chinese government. Beijing also demanded that Chinese materials and workers be used for the project. So, Thai soil was to be used for benefitting the Chinese government, Chinese businesses, and Chinese workers. Naturally, Thailand didn’t like it.

Finally, Thailand cut the project by about 60%. It announced a new project- a 253 km rail line connecting Bangkok with Nakhon Ratchasima Province. It was also redesigned to carry only passengers at a speed of 250 kph. The joint Chinese-Thai venture was scrapped, and Bangkok said that it would bear the entire construction cost of $5 billion. China’s role has been limited to providing designs and systems for the rail project.

In any case, Thailand does not need a rail link between Bangkok and Nong Khai. Rail transport is not very popular in Thailand and accounts for only 20% of passenger traffic and 2% of cargo transport.

Demand for rail services to Nong Khai is unlikely to grow significantly as budget airlines already fly there from Bangkok and Southern China. Initially, Thailand thought that a high-speed rail line connecting Bangkok with Nakhon Ratchasima will help it reduce the burden on its North-eastern Line that plies between Bangkok and Nong Khai. But now, Thailand is dragging its feet. It realises that it doesn’t even need high-speed rail and China is the only one benefitting out of it.

Therefore, Thailand has given a second successive jolt to China. This effectively means that China wouldn’t be able to achieve the ultimate purpose of its overhyped Belt and Road Initiative (BRI).