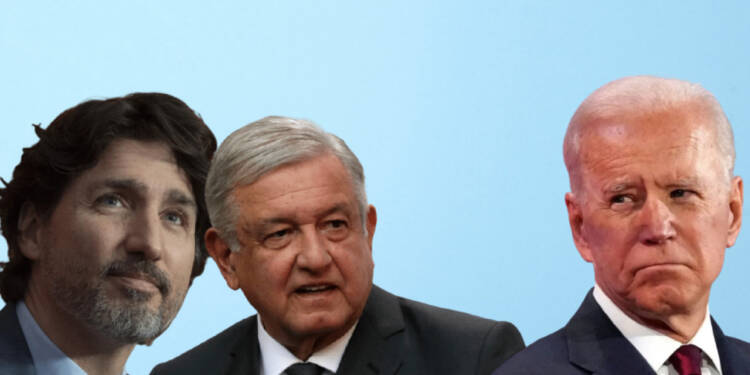 The United States–Mexico–Canada Agreement (USMCA), which is a free trade agreement, was signed during Trump’s presidency by all three countries to seamlessly replace the 25-year-old North American free-trade agreement. The new USMCA was supposed to make the trade between the three neighbouring countries more easy, fast and conflict-free, but it seems that the new FTA is all set to create a divide between the three countries.

In a serious and escalating conflict with the US, Canada has joined hands with Mexico over the dispute of how much percent of a car or a truck must be made in North America to qualify for the duty-free treatment under USMCA. It is the second time in six months that a conflict has risen between the three countries over automotive trade. Automobiles and auto parts have a vital portion of manufactured goods that are traded between the US, Canada and Mexico.

Canada and Mexico are also in another dispute with the US over Biden’s efforts to bolster US auto sector jobs by giving tax incentives to the buyers of made in US electric vehicles. The governments of Canada and Mexico are also concerned about the possibility of automotive companies in their respective country shifting their manufacturing plants to the US, which will cause huge losses in jobs and taxes.

Also Read: Canadian media treat their own country like it is the 51st state of the United States of America

Business and Trade experts have shown concerns and have said that it’s disturbing to see conflicts & disagreements over a key element of the 2018 trade pact so early in its history. This also shows that the three countries don’t have faith in one another when it comes to trade and FTA.

“The auto industry is the heart and soul of North American integration,” said Christopher Sands, director of the Canada Institute at the Woodrow Wilson International Center for Scholars. He added, “If the auto industry part of Canada-U.S. free trade breaks down, the whole agreement breaks down. You cannot exaggerate the importance of these disputes.”

On Thursday, Mary Ng, the international trade minister, announced that Ottawa is joining Mexico in a request for judicial arbitration of how the US calculates North American content. Both the countries of Mexico and Canada have demanded the establishment to constitute a legally binding dispute settlement panel to rule on US interpretation of automotive rules of origin under Chapter 31 of the USCMA. Under the new FTA of USCMA, 75 percent of a car or light truck and the core components like engines or transmissions, must be manufactured in North America to avoid duties. The number of 75 percent is a significant increase from 62.5 percent under the old NAFTA.

Read More: How the United States kept the EU militarily weak for decades and why it could change soon

“The outcome was the result of negotiations and close consultations with automotive stakeholders, which ensured that these new rules of origin would deepen regional integration and support the competitiveness of automotive producers in North America” Ms. Ng said. Welcoming Canada’s move, Mexican Economy Minister Tatiana Clouthier said, “Together we will defend the competitiveness of this regional industry”.

According to Lawrence Herman, an international trade lawyer, the Biden administration is under heavy pressure from the US autoworkers unions as they want the government to defend a stricter interpretation of North American regional content rules.

If the three countries fail to settle the conflict and find a durable solution to this problem, then the automotive companies could respond by rejecting to comply with USMCA. They may instead go with the option to pay extra duties incurred as a result of using imported parts. This step would further result in loss of North American jobs, rise in unemployment in the automotive sector and loss of taxes and revenues for the governments.

Forget Hunter Biden, Nancy Pelosi’s son is a fraudster of another level