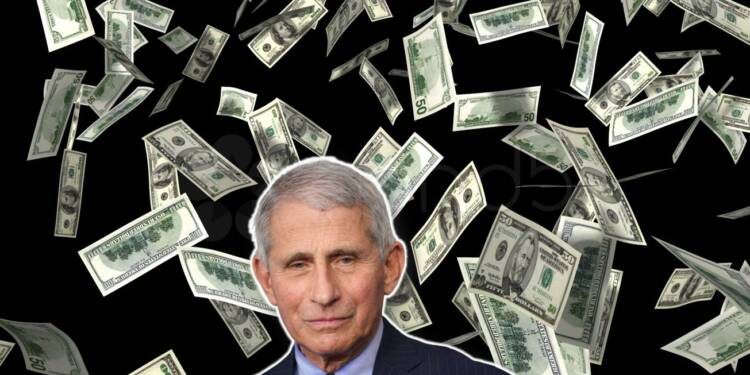 There are certain things that have become facts when it comes to the story of Dr Anthony Fauci. It is sure that he has led to the deaths of millions because of his skewed policies on Covid management. He has also established himself as the confidant of the big pharma and the deep state, by doing their bidding for the last 2 years. Now, going by the latest expose, Dr Fauci is not only helping his friends profit off of the misery of the American people, but himself has made millions back in 2020.

According to newly revealed data, the president’s chief medical advisor and his wife had $10.4 million in investments at the end of 2020. The money was invested in various mutual funds, including $2.3 million in unrealized gains. Sen. Roger Marshall (R-Kan.), whom Fauci had branded a “moron” after he queried about Fauci’s financial disclosures during a Senate hearing Tuesday, made Fauci’s 2020 financial report public Friday night.

The Profiteer in the garb of a doctor

Dr Fauci’s 2020 filing, which was previously unavailable to the public, reveals the financial details of the nation’s highest-paid federal employee, who earned $434,312 in 2020 and is on course to retire with a $350,000 yearly pension. On the other hand, Christine Grady, his wife, is the Chief of the National Institutes of Health’s Department of Bioethics, with a salary of $176,000.

While there is nothing wrong with this, given it is part of the paycheck. But the fact that he tried to hide the details about his earnings and the burgeoning investments by Fauci in multiple domains.

🚨🚨 BREAKING! I obtained Dr. Fauci’s previously unpublished financial disclosures. Dr. Fauci was completely dishonest about his disclosures being readily accessible to the public which is why I am releasing them now.

He and his wife invested in Atlas large-cap mutual funds, Pimco’s investment-grade bond fund, and a tax-exempt municipal debt fund through a combination of trust and retirement accounts. The Pax Ellevate Global Women’s Leadership Fund, which invests in companies that “advance women through gender-diverse boards, senior leadership teams, and other policies and practises,” and the Matthews Pacific Tiger Fund, which focuses on East Asian countries, particularly China but excluding Japan, are among the other holdings.

Fauci also disclosed a stake in Jackson Fillmore, a trattoria in San Francisco that is located in House Speaker Nancy Pelosi’s district, worth between $1,000 and $15,000.

Also read: The Fauci Scandal: The mother of all scandals

Fauci’s finances have drawn further scrutiny after he said that the “misinformed” Sen. Marshall merely needed to “ask for” his 2020 declaration, which he claimed was publicly available (but really was not). In response to a strongly worded letter, Fauci’s employer, the National Institutes of Health, handed the materials over to Marshall on Friday. According to Adam Andrzejewski of OpenTheBooks.com, Fauci’s compensation for the years 2021 and 2022 has yet to be revealed.

The revelations tell us how Dr Fauci has made millions while the Americans were living hand to mouth. However, the fact that the reports for the years 2021 and 2022 have yet to be revealed, one can expect even more humongous profit margins for the Doctor who chose the establishment over the citizens of the USA.