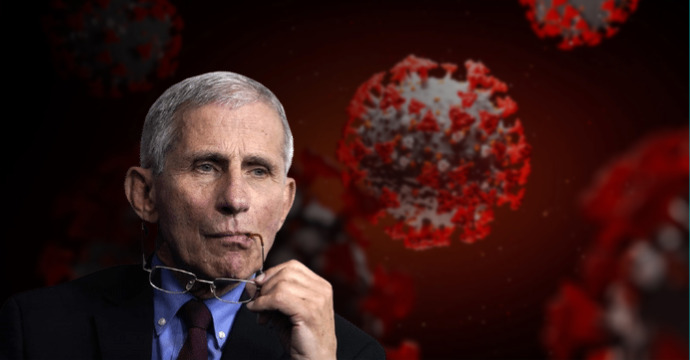 The great grand Covid-19 coverup is falling apart – piece by piece. A significant population around the world, from the very beginning of the pandemic, have astutely believed that Sars-Cov-2 – the virus causing Covid-19, does not have natural origins.

However, the Chinese Communist Party, in collusion with their ‘friends’ in the West were able to contain the truth for a long time. But every story has a shelf life. And China’s story of Sars-Cov-2 having a “natural origin” has exceeded that shelf life. Now, the truth is coming out, and it is implicating Dr Anthony Fauci like never before.

This time, evidence of Dr Fauci’s collusion with China and the EcoHealth Alliance has come from Congress. Just to brush up on your memory, EcoHealth Alliance is the organisation that funded bat-born Coronaviruses in Wuhan and the United States, while also carrying out gain-of-function research into such viruses.

EcoHealth Alliance, led by Peter Daszak had approached the Defence Advanced Research and Projects Agency (DARPA) in March 2018, seeking funding for the gain of function research into bat-borne Coronaviruses. DARPA had rejected the proposal saying it is too dangerous and will be a potential violation of a 2014 moratorium placed on such studies by the U.S. government. So, EcoHealth Alliance’s plans to conduct dangerous research into Coronaviruses were effectively grounded.

But here’s where things get interesting. EcoHealth Alliance did not stop there. After getting its proposal rejected by the Defence Advanced Research and Projects Agency, the organisation approached the National Institute of Allergy and Infectious Diseases. Don’t we all know who heads this agency? That’s right. It’s Dr Anthony Fauci. Guess what Fauci did? He approved EcoHealth Alliance’s plans to conduct such research.

Republicans on the House Oversight Committee have released several emails which suggest Dr Anthony Fauci may have known that Covid-19 originated from an artificial setup and that it may have been “intentionally genetically manipulated”.

In their letter to the Secretary of the U.S. Department of Health and Human Services, Republican lawmakers have asked for an investigation to be immediately set up against Dr Fauci, in order to gather whether such information was “conveyed to the rest of the government and whether this information would have changed the U.S.’ response to the pandemic.”

The letter read, “Excerpts of emails we are making public today reveal that Dr. Fauci was warned of two things: (1) the potential that COVID-19 leaked from the Wuhan Institute Virology (WIV) and (2) the possibility that the virus was intentionally genetically manipulated.”

According to the letter, ‘Fauci was aware of the monetary relationship between NIAID, the NIH, EcoHealth Alliance and the Wuhan lab – by January 27, 2020. Having allowed EcoHealth Alliance to conduct its dangerous research into Coronaviruses, Fauci also knew that EcoHealth and NIAID worked together to craft a grant policy that would ‘sidestep the gain-of-function moratorium at the time.’

In a conference call dated February 1, 2020, Dr Fauci along with NIH head Dr Collins, and ‘at least eleven other scientists’ convened to discuss Covid-19. According to the letter of Republican lawmakers on the House Oversight Committee, “It was on this conference call that Dr Fauci and Collins were first warned that COVID-19 may have leaked from the WIV and, further, may have been intentionally genetically manipulated.

Again, it is unclear if either Dr Fauci or Dr Collins ever passed these warnings along to other government officials or if they simply ignored them.”

Read more: Trump exposes Dr Fauci for the fraud he is and the story of the American deep state’s collusion is out in the open

It was merely three days after this conference call that four of its participants authored a paper entitled “The Proximal Origin of SARS-CoV-2,” of which Fauci and Collins were sent drafts.

Interestingly, Fauci and Collins have been accused of editing this paper. It is therefore not surprising that after having their paper edited, the authors – who had previously expressed concern over a lab leak and genetic manipulation, suddenly abandoned that theory to insist the new virus had a natural origin.

All of this makes Fauci a big fat liar who should be held responsible for his silence despite having extensive knowledge of the origin of the virus and yet, keeping it from the public.