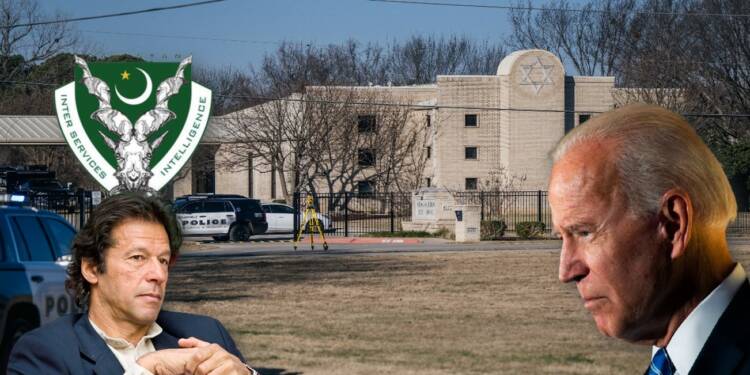 A synagogue in Texas, United States came under attack on Sunday. A gunman had taken four people hostage. The daylong siege at the Congregation Beth Israel synagogue in Colleyville ended in gunfire with all hostages released unharmed and with the suspect dead. Safe to say, Pakistan has conducted yet another terror strike in the United States. 9/11 was an act of Pakistani terror as well. The problem is mainstream media in America will not put it out so bluntly. The hostage situation in Texas was not some crime which American society needs to take lying down. It was an act of terror, and Pakistan needs to be punished for the same.

How is Pakistan Connected to the Texas Attack?

Well, it’s simple. The United States has something which Pakistan wants for over a decade. It’s a woman. A woman who tried to kill FBI officers and U.S. security officials. She is currently serving an 86-year sentence in an American prison. Her name is Aafia Siddiqui.

Aafia Siddiqui is a Pakistani neuroscientist who studied in the United States at prestigious institutions — Brandeis University and the Massachusetts Institute of Technology. After the 9/11 attacks, Siddiqui engaged in brazen anti-America and anti-Semitic activism. In 2008, American officials found in her possession handwritten notes that discussed the construction of so-called “dirty bombs” and that listed various locations in the US that could be targeted in a “mass casualty attack.”

The FBI and U.S. Justice Department described her as an “al-Qaida operative and facilitator” at a May 2004 news conference in which they warned of intelligence showing al-Qaida planned an attack in the coming months.

Pakistan Wants its Daughter Back

Now, guess what the Pakistan-sponsored hostage-taker at the synagogue in Texas demanded? He wanted Aafia Siddiqui to be released by American authorities. In fact, Pakistan has been demanding that Aafia be released by the United States ever since she was convicted. After her conviction, the people of Pakistan took to the streets in large numbers in solidarity with the woman.

Pakistan’s largest Islamist party, the Jamaat-e-Islami, held multiple rallies over the coming years in her support. Television shows were dedicated to campaigning for her release, featuring her sister and children. In 2018, the Senate of Pakistan unanimously passed a resolution to take up the matter of Siddiqui’s freedom with the U.S., referring to her as the “Daughter of the Nation”.

Pakistan Has Conducted Terror Strikes Around the World to Free Her

57 innocent people around the world have been killed in Pakistan’s quest to get Aafia freed. Pakistan has conducted terror attacks across the world and has also orchestrated acts of violence to avenge her arrest. Separately, the terror state has been trying to lobby Washington to also hand over Aafia Siddiqui under a prisoner swap agreement.

At the centre of all attacks carried out in the name of Aafia Siddiqui is Pakistan’s Inter-Services Intelligence (ISI), which is the Islamic country’s violent intelligence agency. Aafia Siddiqui is seen as a fighter in Pakistan, and by the country’s military establishment. It is for this reason that for the past ten years, people have been blowing themselves and others up for the cause of Aafia’s freedom.

Read more: There is a very strong Pro-Pakistan lobby in the US and Joe Biden leads it

Pakistan has a long history of harbouring anti-American terrorists. Need I remind you how Osama Bin Laden received a safe haven in Pakistan? And then, Aafia Siddiqui – because of whom Americans continue to be hunted down, is also a Pakistani. So, the real question is – when will Americans look at Pakistan for the monster it really is? The need of the hour is for Americans to realise that Pakistan exports terror across the world and that it must be taken down immediately.

Pakistan has nothing else to offer to the world. You see, it is a bankrupt nation with a lot of radicalism flowing through its veins. So, the only natural outlet for such people is to engage in acts of violence around the world at the behest of the ISI. Pakistan is also the country that derailed America’s Afghanistan mission. Islamabad supported the Taliban, and it really cost America everything in the war-torn country.

20 years of fighting went to waste, only because Pakistan backstabbed the United States – all while orchestrating attacks against it. If the attack in Texas does not wake Americans up to the threat of Pakistan, nothing really will.