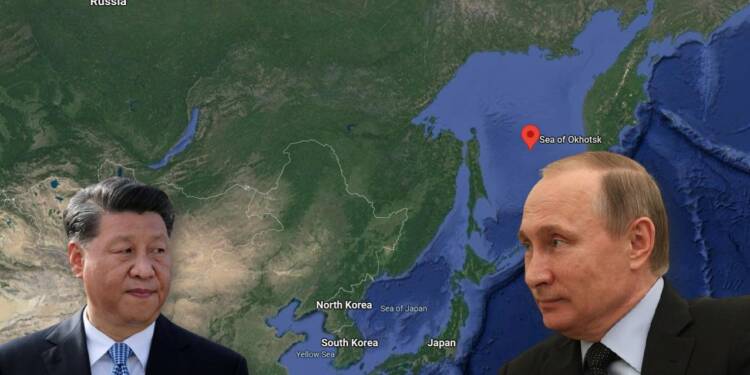 Russian President Vladimir Putin is working tirelessly on one agenda- putting China in its place. You may not realise it upfront, but if you read between the lines, you will realise how Moscow is constantly after Beijing and is looking to punish it by hook or by crook.

Now, take a look at Russia’s sweeping naval drills amidst growing tensions between Western powers and Moscow. Russia will carry out naval drills in several parts of the world. The exercise will involve over 140 warships and 60 aircraft and will be conducted in both littoral waters and more distant “operationally important” areas like the Mediterranean, north-eastern Atlantic and the Pacific Ocean. You may feel that this is all about Ukraine. Well, it isn’t. It is also about China and the Sea of Okhotsk.

What is the Sea of Okhotsk all about?

The Russian Navy is going to unleash all its fleets in the naval exercises this month and it will also carry out drills in the Sea of Okhotsk.

Now, here is the interesting part- The sea of Okhotsk doesn’t have much to do with Ukraine or NATO. Located in the Western Pacific Ocean, the Sea is named after Okhotsk, the first Russian settlement in the Far East, and except for a small area, it is almost completely surrounded by Russian territory.

So, why is the Sea of Okhotsk important to Moscow? Well, it is very rich in fisheries and also offers untapped hydrocarbons for exploration. Russia has been trying to push back against foreign fishing here since the 1850s and considers it to be “a Russian inland sea.”

In 2014, Russia managed to win a favourable award from the UN Commission on the Limits of the Continental Shelf that handed over effective sovereignty of the Sea of Okhotsk to Moscow. The US, the EU and NATO haven’t ventured out to dispute Russia’s sovereignty over the Sea and have been more concerned about Europe. So, why is Putin unleashing the wrath of the Russian Navy in this subarctic Sea?

Russia is looking to bring its naval power into play in the Sea of Okhotsk only to tackle one threat- China.

Russia had attentively guarded the subarctic Sea against foreign vessels in the 1990s. In 1995, for example, Russia had conducted 11,000 inspections and had found 14 percent of the vessels to be violating fishing quotas. There were several episodes of arrests of the crews, impoundment of vessels and a few cases of naval gunfire. Finally, Moscow’s authority to set and enforce quotas in the Sea was officially recognised with the implementation of the UN Fish Stocks Agreement of 1995.

Russia pushing back China in the Far East

So, Russia used to be wary of Chinese attempts to steal fish from the Sea of Okhotsk. And the announcement of naval drills in the Sea suggests that Russia remains concerned about Chinese ambitions.

The sea of Okhotsk is central to the booming Russian Far East fishing industry. And Putin knows how Xi Jinping is trying to ramp up Beijing’s influence in the Russian Far East.

Read more: Russia gears up to chase Chinese fishing fleets out of Arctic and the Russian Far East

In fact, China has been deliberately avoiding purchases of Russian fish. China accounts for 61 percent of all fish exports from Russia and in 2019 Chinese imports of Russian fish accounted for over $3.2 billion. And now, China is using the excuse of Coronavirus traces on fish packages to avoid buying Russian fish.

Also Read: ‘This is our land,’ China now claims Russia’s Vladivostok as part of its territory

Putin knows that China wants to tighten its hold on the Russian Far East. He also knows how China has been trying to harm Russian interests by hoarding massive gas supplies and exporting them to Europe in a bid to free the EU from dependence on Moscow. Putin is fuming now. And he is therefore unveiling the might of the Russian Navy on China with drills in the Sea of Okhotsk.