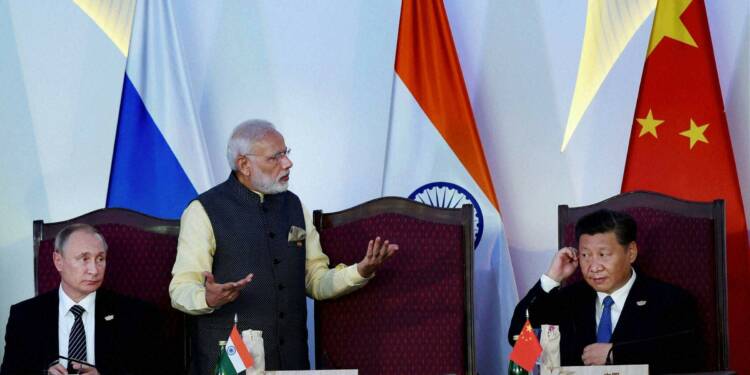 If human history gives geopolitical planners one big lesson, it is that the world keeps changing. 30 years ago, the Atlantic was the most prominent part of the world. Today, the Indo-Pacific occupies that central role. Yet, a few decades down the line, the Indo-Pacific too would give way to a new region- the Arctic, where the melting snowfields are opening up a potential trade route and a Sino-Russia contest.

The Indian military planners and the Indian Navy, in particular, is ready to embrace the future. Presently, the Indian Navy’s proposal to build six new nuclear attack submarines (SSNs) is making headlines. It is being reported that the latest proposal is a part of India’s push to become an enviable Indo-Pacific. Yet, an HT report reveals a possible Arctic angle behind the latest submarines proposal.

“The future not only lies in the Indo-Pacific but also the arctic route that will open up due to receding snowfields,” HT quoted a serving admiral as saying.

The six new nuclear-powered submarines, if and when built, would give the Indian Navy ample firepower in the submarines sector. With nine such naval assets, the Indian Navy leadership would be able to look beyond the Indo-Pacific. This is where the Arctic comes into the picture.

This is certainly not the first time that an Indian person in authority has spoken about the Arctic. Last week, India’s Earth Sciences Minister Harsh Vardhan too spoke about plans to contribute observing systems in the Arctic, both in-situ and by remote sensing.

He said, “India would continue to play a positive role in deepening shared understanding of the Arctic through observation, research, capacity building, as well in promoting sustainable development of the region through international cooperation”.

New Delhi is, thus, making its future Arctic plans very clear. As a responsible military and economic power, India has a moral responsibility to ensure that the Arctic region develops in the spirit of international peace and cooperation. And then, there are diplomatic and geopolitical issues to be addressed as well.

Till now, the Arctic has remained a matter of concern between Moscow and Beijing. While Russia, an Arctic State, professes the primacy of Arctic nations in the fast-melting region, China calls itself a near-Arctic State. Geographically, China is nowhere near the Atlantic but when the polar region opens up for trade and resource exploration, Beijing would want to exploit it for personal gains.

By 2044, the Arctic Ocean could be completely ice-free for at least a part of the year. Meanwhile, China and Russia are both hustling to gain maximum possible influence in the region by the time the Arctic opens up a booming trade route and offers a whole new array of natural resources.

Russia, in fact, runs the Northern Sea Route (NSR) in the Arctic in a bid to assert its influence over the trade route. However, China has also conceived the polar silk road, rivalling the NSR.

Last year, the Sino-Russian rivalry again came to the surface after reports of Chinese plans to launch an imaging satellite for monitoring the Arctic shipping routes. Russia responded by re-opening a Soviet-era laboratory with the purpose of testing weapons in extreme Arctic conditions.

So, where does India come into the picture? What role can India play in the Arctic in the context of the growing Sino-Russian rivalry? Make no mistake, a few decades down the line Chinese intrusions into the Arctic could actually force a deadly Sino-Russian conflict and therefore India’s presence becomes crucial.

At the end of the day, India remains a Russian ally. So, expect New Delhi to support Moscow against Chinese expansionism in the region. As such, India’s support for Russia will not be unsolicited either.

Read More: If we go by the massive arms buildup, Arctic is about to turn into the biggest War Theatre in the coming years

As such Moscow needs New Delhi’s cooperation in the maritime sector. If Russia has to safeguard the Arctic, it will have to ramp up its naval power with India’s support which has declined continuously after the Soviet collapse that left Russia in a difficult geography devoid of sufficient warm-water ports and bases.

Ultimately, India’s future Arctic plans also give it ample geopolitical leverage in the present world order. As such, India can give a simple message to Moscow- you help us tame the paper Dragon in the Indo-Pacific today, and we will help you to kick it out of the Arctic tomorrow.

Moreover, Russia and India have been longtime defence partners, which also helps in the form of greater trust and interoperability in military forces. India’s perceived Arctic shift matters, as it ensures that the paper Dragon is not able to flex its muscles in an entirely unexplored part of the world when it opens up for the human activity.