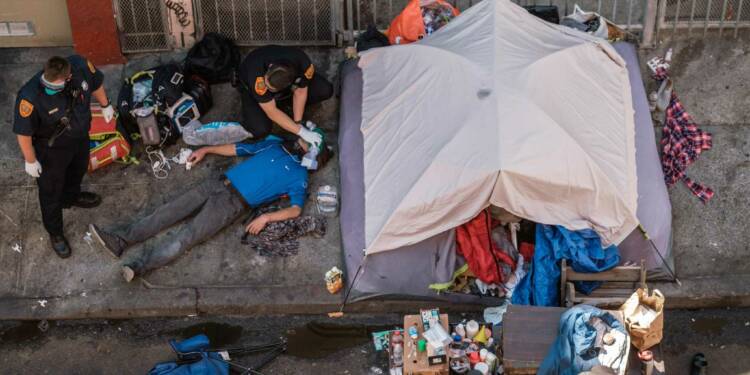 Paramedics work to revive an overdose victim in the Tenderloin in San Francisco on Saturday, July 11, 2020. New numbers from the medical examiner's office show drug overdoses this year in San Francisco spiking even more than previously known. Now one of two bodies brought to the medical examiner's office died of a drug overdose.

The Joe Biden administration at the Federal level and other democrats at the state level are changing the entire definition of being American. The so-called progressive clique of the Democrats are forcing deep socialism down the throats of the freedom-loving American people. While this is a sad reality in itself, Democrats are unfortunately bringing socialist evils into the US. Pieces of evidence of the same are piling up and are easily visible all around the democrat led states.

Now, in San Francisco as part of this trend, taxpayers’ hard-earned money will be used to serve drugs to homeless addicts. And why not, democrats would want people to lose consciousness and be sheepish to the big brother government. As per reports, San Francisco Mayor London Breed announced a major assault on open-air drug use and drug sales in the downtown Tenderloin area last December and received a lot of national media attention. She announced a “linkage centre” to connect homeless street addicts with drug recovery clinics shortly after.

Breed’s declaration comes amid a local, state, and national discussion about whether the city should operate a “supervised drug consumption” location to combat drug overdose deaths. There is a nationwide debate about the effectiveness of supervised drug consumption facilities, which are outlawed by state and federal legislation, as well as a local dispute about whether and where one should be opened in San Francisco.

Also read: Welcome to Biden’s America where more homeless people live in the capital than anywhere else

However, in all these developments one thing that everyone is missing is the fact that, while de-addiction facilities are already there, then why do they need to provide illicit drugs to homeless people.

Mayor Breed and members of the San Francisco Board of Supervisors have pushed for a supervised drug-use facility and purchased two homes in the Tenderloin to help addicts. It means the state will quite literally serve the addicts with their daily fix of drugs, but not use the de-addiction facilities and help them get out of drug addiction.

While the Mayor has created these facilities, the city never approved the connection centre’s installation of a supervised consumption facility. To put it bluntly, it is in gross violation of state and federal laws.

While the news in itself is mind-boggling, there is a bigger problem that will come out of the decision. San Francisco is one of the many democrats’ run cities with rampant homelessness and the current development is going to provide precedent for other cities to follow suit and create their own consumption facilities – even in Washington D.C.

California is already on the brink of becoming a tragedy under the Democrats, with a rise in the number of homeless persons, an increase in opioid addiction and large businesses fleeing the town, amidst the Pandemic. However, the state can copy the model of San Francisco, thereby spending even more public dollars on policies that are going to exacerbate social evils instead of solving them.

While this may be socially wrong, it makes sense for the democrats. A political party that is willing to change the state-wise demographic to suit its political agenda, can also create voter farms in cities by being the authority that gives drugs to homeless addicts and use their votes to keep themselves in power.