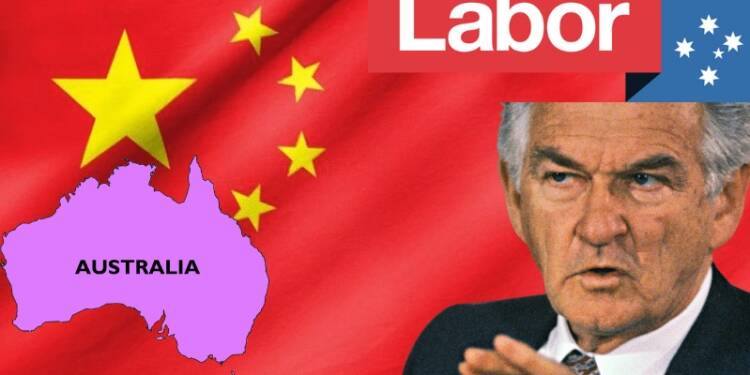 The folly of a leader can impact generations to come. And in the case of Australia, what can be a better example than the leadership of Bob Hawk, who opened his country to an unchecked immigration from Communist China in the 1990s. After the 1989 Tiananmen Square massacre, Bob Hawke made his famous, tearful vow to allow Chinese students to stay in Australia without consulting the cabinet.

Hawke told the Guardian Australia that when he made the announcement, he had just received a cable from the embassy detailing what had happened on June 4, 1989. While this may have been in good faith, it opened the floodgates for the Chinese Communist Party to send its informers and loyalists. And while he may try to portray it as an altruistic act, making one’s country susceptible to foreign influence is not such a noble act.

Australia got played by the Labor Party

Several government ministries, including immigration, the Treasury, and finance, exhibit significant opposition to the decision, according to papers published by the National Archives in 1988-89. The budget, the migration programme, and the labour market would all suffer negative impacts, according to the departments. However, given the way in which the labor party acts, under their stewardship, Australia’s national security was compromised and it was one of the early examples of compromised virtue signalling.

At the same time, Australia was embroiled in a contentious discussion over the rate of Asian immigration, sparked by remarks by historian Geoffrey Blainey, then-opposition leader John Howard, and the FitzGerald immigration report. Hawke, on the other hand, pushed through the debate and, three days before the slaughter in Tiananmen Square presented a cabinet recommendation for a “multicultural agenda” that included expanding SBS, establishing English as the national language, and encouraging immigrants to apply for citizenship. He said it was created to reassure the general public as well as ethnic groups of the benefits of multiculturalism.

However, in the name of multiculturalism and providing safe haven to the Chinese people, he allowed a lot of CCP loyalists into Australia and provided a tool for Beijing to control the policies and politics of the continental scale country.

After monitoring 500 recent incidents of covert foreign agents intervening in Australia’s domestic politics, Australian intelligence determined that China’s Communist Party (CCP) is by far the “most active” in attempting to influence politics and lawmakers in the island nation. According to news agency ANI, a senior intelligence officer revealed in an interview for correspondent Peter Hartcher’s new book “Red Zone” that there were approximately 500 documented or suspected examples of foreign meddling and espionage in the second half of 2020.

The criteria were “known or suspected,” according to the official, who spoke on the condition of anonymity. Australian intelligence did not confirm all suspected cases, and the likelihood of several unreported cases was admitted. “Several countries are behind such operations,” the Sydney Morning Herald reported, “but officials have claimed that the Chinese Communist Party is by far the most active in trying to influence Australian politicians and political processes surreptitiously.”

Beginning in 2016, a succession of incidents involving persons in business and the media who were linked to the Chinese Communist Party (CCP) and eager to push its agenda in Australia started to upset Australian politics. After charges that he alerted a Chinese contributor of possible Australian government spying, a senior politician was kicked out of parliament. Other political hopefuls have experienced backlash from the media because of their ties to Chinese-linked organizations (PRC). Similar accusations are already being made in the run-up to the federal election. Universities have been accused of failing to implement control or accountability to protect overseas students from Chinese attempts to monitor and censor them.

The scandals had a significant impact on Chinese-Australians, with one senator asking that Australian individuals of Chinese heritage who appeared before him condemn to the CCP during a legislative enquiry into diaspora groups. Following the COVID-19 outbreak, the same panel recognised “the harm that racism and prejudice have on social cohesion (and) the apparent increase in anti-Chinese sentiment.”

Also read: Morrison is about to seize Jinping’s personal properties

The immigration department and its minister were concerned at the time that the Tiananmen Square events would affect the mix of applications for onshore refugees, a fear that is currently reflected in government policy on asylum seekers arriving by boat. The department was likewise wary of students who took extensive English classes to “get around” admittance restrictions.

According to the document, there were 16,200 Chinese nationals in the country at the time, with 7,200 of them overstaying their visas. There were 11,400 pupils in all, with 78 percent of them being intense English students. Another 1,500 students had visas and intended to visit Australia, while 22,000 had paid their immigration costs and bonds.

Ray’s submission revealed a conflict between limiting the number of intensive English students from China and ensuring that they earn money from full-fee courses. When the Immigration Department attempted to impose stiffer admission tests for short-term English language students, the Department of Education, Employment, and Training contended that the strategy would reduce the number of students “and hence export income.”

The Keating government implemented mandatory detention for unlawful entrants three years later, in 1992. The way in which he opened the country to the Chinese people, made China open to CCP’s influence operations.

Different instances involving Australian lawmakers and Chinese-Australians during the previous five years have affected the ongoing discussion concerning China’s interference in Australian society and politics, many of which have been extensively covered in the media. Furthermore, Australia’s domestic security agency, ASIO, has issued a regular and increasing drumbeat of warnings about the possibility of foreign involvement.

Read more: Australians may handover their country to China on a golden platter, if they can’t see through liberal party-China theatrics

Before Prime Minister Scott Morrison, Australia’s prime ministers really seemed to pay no heed to China’s visible plans of taking their country over. By 2019, China owned an airport in Western Australia, nine million hectares of Australian land, several Aussie coal mines and wind farms and even the Port of Darwin – a key strategic asset. China is also the largest foreign owner of Australian water.

Over the past decade, China has poured more than $150billion into Australia by investing in or acquiring Aussie companies. It was Prime Minister Morrison who began kicking the Chinese out of several projects in Australia and also set out on a spree of reviews of important strategic infrastructure assets that China had managed to gobble up over the years.

Beijing has tapped into overseas Chinese finance for the PRC’s national growth in addition to these ethno-nationalist aims. China’s rapid economic expansion was dependent on foreign investors and cash, particularly in the early years of ‘reform and opening’ in the late 1970s. China attracted US$622.4 billion in investment between 1979 and 2005, with US$417 billion — nearly two-thirds — coming from direct overseas Chinese capital or overseas Chinese-tied capital.

And not only this, now the Chinese Communist Party is using its influence in Australia to influence elections there. Just like we said in the beginning, one intentional mistake by Bob Hawke and the whole of Australia is paying its price dearly.