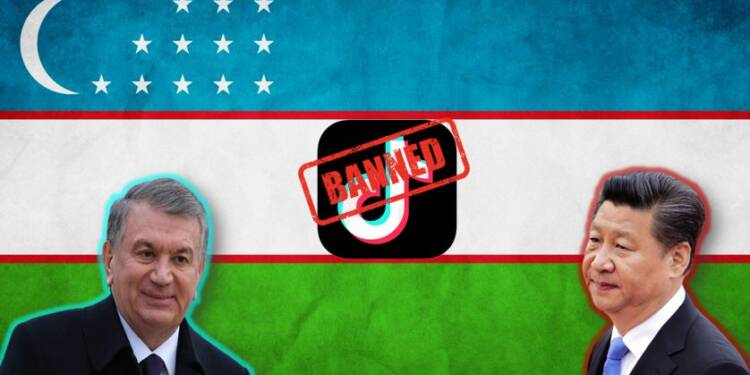 The geopolitical clout of the Chinese Communist Party in the Central Asian republics has reached its nadir. Russia has stormed back into the region and established its supremacy, concurrently; India too has increased its outreach and influence at the expense of China. While earlier this year, Tashkent decided to stop its natural gas exports almost all of which were bound for China. Now, Uzbekistan has sent another shocker to the Communist regime in Beijing with its ban on Tiktok.

Uzbekistan’s Adolat Social Democratic Party called for a complete ban on Chinese video-sharing social network TikTok on Wednesday, accusing it of causing more harm than good. “Strengthening criminal liability measures is important, as is entirely blocking mobile applications on the internet that do more harm than good, such as TikTok,” according to a party statement cited by Sputnik News Agency.

Despite the country’s existing connectivity restrictions, TikTokers can access the network via VPN programs, and according to the party “this issue should be investigated.” As per the news agency, the initiative was prompted by a high-profile case involving an underage TikTok user who filmed himself kicking an elderly man in the city of Samarkand last week.

“Gas exports have been completely stopped, and all gas volumes are being directed to domestic consumers within the country,” an Energy Ministry representative told Interfax news agency. The shift comes following violent turmoil in Kazakhstan, which began with protests against an increase in the price of liquified petroleum gas, or LPG, which is commonly used to fuel cars. In Uzbekistan, a lack of gas has sparked desolation among its citizens for many years, albeit, these feelings never evolved into street protests.

The country realized that exporting natural gas at the expense of its citizens to China will lead to a nightmare scenario, during which, CCP is most likely to not provide any support. Uzbek motorists primarily utilize LPG as fuel. It is used by about 60% of autos, and its prices are tightly regulated by the government. In the winter, shortages caused by heating needs result in filling station shortages and, as a result, long queues. In such a scenario, a vulnerable nation can become extremely susceptible to misinformation campaigns from the likes of the Chinese Communist Party.

At TFI we have earlier reported on how TikTok is capacitated to create social unrest and lawlessness as and when the CCP (Chinese Communist Party) found it the most useful. Former TikTok employees believe that the Chinese parent firm of the popular social media app is a source of concern. According to the report, ByteDance has access to TikTok’s American user data and is heavily involved in the company’s decision-making and product development in Los Angeles. Some cybersecurity experts are concerned that the Chinese government could help utilize TikTok to transmit propaganda or censorship to an American audience or to exert control over users who may later regret what they posted on the platform.

One employee, in particular, claimed that ByteDance personnel have access to user data from the United States. This was demonstrated in a circumstance where a TikTok employee wanted a list of global users, including Americans, who searched for or interacted with a specific sort of material — that is, individuals who searched for a specific phrase or hashtag or liked a specific category of videos. To get access to the information, this individual had to contact a data team in China. Users’ IDs were included in the data the employee received, and they could access any information TikTok possessed on particular users.

All these factors have been carefully deliberated by the leadership in Uzbekistan. After discerning the destabilizing potential the CCP’s app may have, the country has decided to ban Tiktok.