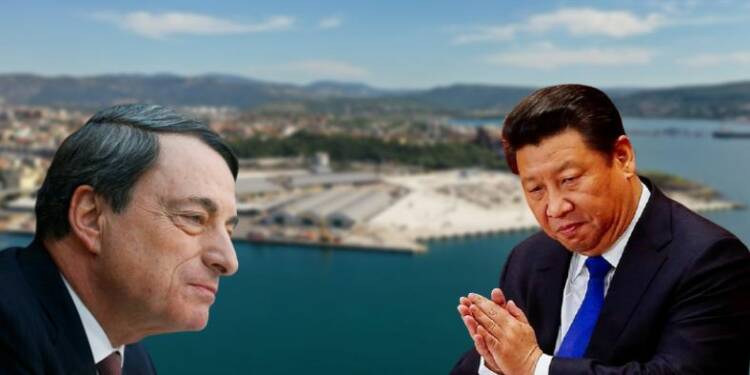 For China, its influence isn’t expanding into newer regions is not the problem. The problem is that countries, where China had good influence a few years ago too, are slipping out of its hands.

Take the case of Italy. China wanted to develop Italy into a European gateway of sorts. The port city of Trieste in particular was close to China’s heart. In 2019, the sentiment was that Italy was succumbing to China, with its presence was mounting in Trieste.

But today, there are no Chinese investors in Trieste, and this represents the larger picture of receding Chinese influence in Italy.

How China got Italy to sell its soul

The year was 2019. The entire world was shocked as then Italian Prime Minister Giuseppe Conte shook hands with Chinese President Xi Jinping. The stake was the Italian soul as Rome officially endorsed the contentious Belt and Road Initiative (BRI).

Alongside the BRI Memorandum of Understanding (MoU), Italy signed deals worth $2.8 billion. It was then being claimed that further deals worth $22.61 billion would be signed. With China fuelling funds into a troubled Italian economy, it was clear that Xi was bidding for Rome’s soul. And the Italian government went ahead with it.

The US and the EU naturally got concerned. Trump administration had then disapproved of Italy’s China embrace. French President Emmanuel Macron too voiced concern over a lack of coordination among European leaders on the China front.

Experts warned that Italy had signed an unequal relationship with Beijing. They said that while China would take advantage of Italy, it would not open up its businesses to the Italians.

But in Italy’s defence, the country was too desperate following the 2018 recession. Rome desperately wanted something to rescue itself.

Also, China’s Cosco had already purchased a controlling share in the Greek Piraeus Port and Italy thought that it would be simply bypassed in an important trading route through the Mediterranean. So, despite all warnings, Italy went ahead of its China embrace.

Caring little for Chinese human rights violations, the Italian government believed that signing an agreement with China will allow it to sell luxury goods to the Chinese. It was also banking on higher exports to China with investments in ports of Tauro and Genoa that have an old, well-connected rail link to Italian industrial hubs, as well as trade hubs in Switzerland, Southern/Central Germany, and Eastern France.

China had other plans. China wanted to develop the Trieste port, because of its strategic location close to nearby ports in Slovenia (Koper port) and Croatia (Rijeka) that had secured EU funding. Chinese State-owned China Communications Construction Company (CCCC) even signed an agreement to develop the port’s infrastructure.

There was also a lot of propaganda about how China was resurrecting the long-neglected port back to life.

China and Italy had different interests. So, China even started a political interference campaign in Italy. A report by Sinopsis and the Marco Pannella Global Committee for the Rule of Law in 2020 explored the role of CCP propaganda bodies like the CCP International Liaison Department (ILD), the Chinese Association for Friendship with Foreign Countries (CPAFFC), the China Council for the Promotion of International Trade (CCPIT) in Italian politics.

The report stated that all these bodies were “key actors in efforts to coopt parliamentarians, political parties, local officials and mainstream voices in think tanks and the media.”

Last year too, the Global Committee for the Rule of Law (GCRL) and Sinopsis published a report titled “Hijacking the Mainstream.” The report claimed that the normalisation of the CCP agenda had become a widely held assumption and critics of the totalitarian Chinese regime were being dubbed as “extreme”.

Italy had almost fallen into China’s lap. But what changed?

In 2019, there was a change of guard in Rome. A new coalition government came to power in September 2019 with the same Prime Minister. But this government wasn’t as imprudent about China.

Meanwhile, Trump was pushing a global campaign against Huawei and therefore the new government in Italy decided to scrutinize several 5G supply agreements, including two deals that involved Huawei and ZTE.

And then the Pandemic happened. Italy was one of the hardest-hit countries during the first wave of the Pandemic in May 2020. And as it turned out, thousands of Chinese workers who were employed in Italy under Belt and Road projects were believed to be fuelling the COVID-19 surge in the Mediterranean country.

China, as usual, started a new propaganda war. It claimed that it was the saviour and not the perpetrator. It used to mask PPE diplomacy as propaganda material in Italy and finally came up with a new idea- calling Italy the birthplace of the Pandemic.

When China blamed Italy for the Pandemic and Italy also realised that its trade deficit with China has widened despite the BRI deal. So, this was pretty much the endgame for Italy-China relations.

If there was any scope left for the Italy-China relationship, Mario Draghi’s appointment as Italy’s PM destroyed it.


Draghi is a true anti-China hawk. He came to power in 2021 and vetoed three Chinese takeover plans in the same year including a plan by Zhejiang Jingsheng Mechanical to set up a joint venture with the Hong Kong arm of the US-based Applied Materials and buy the American group’s screen printing equipment business in Italy. But Italy believed that it would harm the semiconductor industry and therefore blocked it.

It also came to light that two Chinese state firms had taken control of an Italian military drone maker more than three years ago via an offshore company — without the knowledge of authorities in Italy and Europe. Italy isn’t letting it go though and opened up an inquiry into this transaction too.

Meanwhile, the Trieste port too has slipped out of China’s hands. In 2020, an Italian authority retrospectively revoked the role of port authority President appointed by Italy. Subsequently, all contracts and plans over the previous five years became void. Effectively, China’s influence in the port too got affected.

Italy is effectively outside China’s grasp now. A lot has thus changed between 2019 and 2022 as Italy has come a long way from being a probable Chinese puppet to a near China hawk.