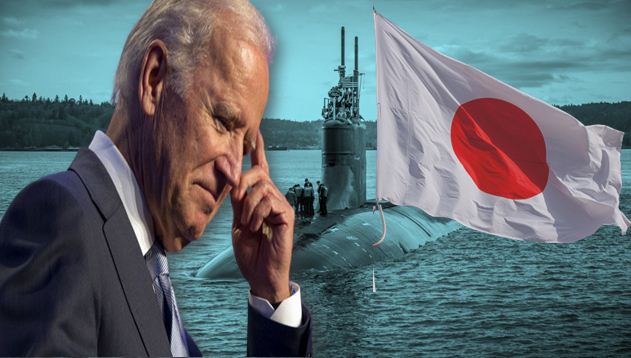 Winds of war are blowing in Europe. The US looks already prepared for an “imminent” Russian invasion of Ukraine. However, except for the UK and Canada, no other NATO country seems willing to help Biden’s war hype to bear fruit.

European nations, particularly Germany and France, are naturally prioritizing their own interests above everything else, and are betting on diplomatic efforts to prevent a Russian offensive.

Biden’s fanning of flames in Ukraine is increasingly proving to be a flop show. So, the topmost man in the US is now attempting to fuel tensions between Japan and Russia, in a move to court Tokyo’s support to pile up more pressure on the Kremlin.

On Saturday, Russia accused the US of intruding into Russian waters in the pacific near the Kuril Islands. A Virginia-class submarine was detected by Russian defence forces and was immediately ordered to come to the surface.

Russia said the order was ignored by the U.S. submarine’s crew, leading the Russian frigate to take unspecified action to make it leave. “The U.S. submarine … left Russian territorial waters at maximum speed,” the Defence Ministry was quoted as saying. However, the US denied undertaking any such military activity in Russian territorial waters on Saturday.

Why did the incident raise red flags in Tokyo?

This is indeed alarming news for Japan. The incident took place off Japan’s shores near the disputed Kuril Islands. Any skirmish between the US and Russian forces near the Kuril Islands would have inevitably forced Japan to join the fray. Moreover, the incident also gave signals to Tokyo that the US is incapacitated to ward off any Russian military threat in this part of the world.

Read More: Biden is fuelling the Ukraine crisis at the cost of friendly relations with Japan

The happening also laid bare the security vulnerabilities of Japan in the disputed Kuril Islands, where Tokyo largely relies on the US defence apparatus to prevent any major military aggression by China or Russia. Altogether, the incident is expected to spark security concerns in Tokyo, and that would inevitably prove to be a terrible shocker to the ongoing reconciliation between Japan and Russia.

USA’s attempts to make Japan join the fray in Ukraine

Make no mistake, the US is incessantly attempting to encourage Japan to join its anti-Russia rally in Ukraine. Last week, according to the Strait Times, Japanese government sources revealed that the US is pressing Japan to divert some gas supplies to Europe if Russia launches a military siege on Ukraine.

Japan, however, has shown little excitement over the USA’s proposal. As per top sources in the Japanese government, Tokyo has made it clear that ensuring sufficient gas supplies at home is the topmost priority. Koichi Hagiuda, Minister of Economy, Trade and Industry told America, “Japan is a key importer of LNG, but would first need to be sure of sufficient domestic supplies before offering international help.”

Why Japan is not willing to take the USA’s bait?

Japan understands that wading into the Ukraine crisis won’t help serve Japan’s interests; instead, it would jeopardize Tokyo’s cooperation with Moscow over the Kuril Islands dispute.

As per Reuters, the Russian Pacific island of Sakhalin is close to a cooperation agreement with a Japanese company on carbon capture and storage technology as it moves to carbon neutrality by 2025. Russia aims to make Sakhalin carbon neutral by 2025, the first region to do so in the country, as the island needs to move quickly in adding renewable resources amid depleting fossil fuels. To achieve the same, Japan will now be helping Moscow.

Both Russia and Japan have been making moves to somehow get past their differences on the Kuril Islands issue, and the first decisive step towards the upliftment of Kuril-centred ties has begun. Russia has been nudging Japan to jointly develop the Kuril Islands with it for quite some time, and Tokyo seems to have now come aboard with the plan.

Russia and Japan also seem willing to cooperate on the ongoing development process of the Northern Sea Route in the Arctic. Meanwhile, India is also believed to have launched a trilateral involving both Russia and Japan to explore opportunities for cooperation in Russia’s Far East.

Friendly ties between Japan and Russia run contrary to Joe Biden’s attempts to demonize Moscow. And that’s why, by staging a military face-off near Japanese territories, the Biden administration is attempting to fuel tensions between the two nations and drag Japan into the Russia-Ukraine quagmire.