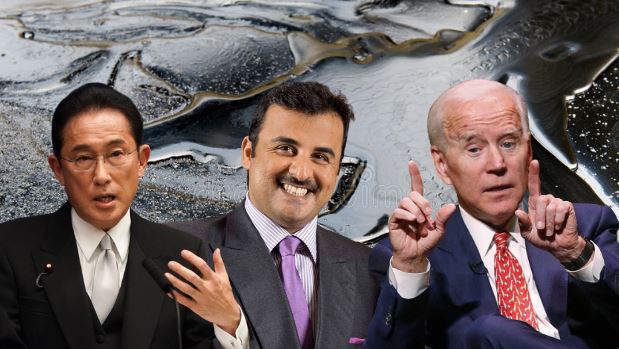 A picture speaks a thousand words and the Japanese diplomats can literally hear what this photos of Qatari Emir Sheikh Tamim bin Hamad Al Thani and U.S. President Joe Biden speak. The two leaders met at the official residence of the US President- the White House. And as a generous guest, Biden said that he would ask the Congress to designate Qatar as a major non-NATO ally.

Meanwhile, the Japanese government is shocked. Only recently, JERA, Japan’s top energy buyer, had refused to renew a 25-year contract with the Persian Gulf nation for liquefied natural gas (LNG). The newly-elected Fumio Kishida government hoped that the gesture will be appreciated by the Biden. But Biden clearly had some other plans. He wants to fuel a crisis in Ukraine, even if it comes at Japan’s expense. And somehow, this gets connected to Qatar.

Japan is a resource-poor country. And while it has a strong industrial base, the country always makes it a priority to stock sufficient energy reserves. JERA’s decision therefore seemed brave.

It was however reported that JERA was looking for diversification and wanted to avoid being over dependent on one Persian Gulf nation. It was also being described as a business decision and JERA itself said, “It has become difficult for us to continue with large, long-term LNG contracts given the development of the global LNG market, global decarbonisation push, the liberalisation of the domestic electricity and gas markets.”

Geopolitics written all over JERA’s decision

While JERA’s decision of not renewing its 25-year contract with Qatar was passed off as a business decision, it actually seemed more geopolitical than financial.

Ever since Kishida came to power in October last year, he was waiting for the official invitation from the White house to meet the US President. The Japanese Foreign Ministry and the Japanese Embassy were making all efforts to secure the big visit. And it made sense in this context that JERA refused to renew its LNG contract with Doha in November.

Yet, Biden didn’t invite Kishida to the White House, after all. Ultimately, the US and Japan settled for a virtual meeting on January 21. The Japanese were snubbed by the Biden administration and Kishida was told that Biden was too busy in America’s internal affairs to meet him in person.

That was, of course, a lame excuse. Only ten days later, Biden and Qatari Emir were shaking hands in front of the fireplace at Biden’s office. Suddenly, Biden wasn’t busy with his domestic priorities and had the time to host a foreign leader.

Biden has his reasons for hosting Qatari Emir Sheikh Tamim bin Hamad Al Thani and literally placating him. Remember, how Biden gave away Afghanistan to the Taliban on a platter? Well, Qatar has good ties with the extremist organisation and Biden now wants to control the damage caused and take Doha’s help in stabilising Afghanistan.

But there is a bigger issue at play. Russia and Ukraine are presently locked in military tensions. On his part, Biden wants to push in NATO and escalate tensions on the Russia-Ukraine border. However, he is not finding any support from European allies because many European countries including Germany are almost totally dependent on Russian gas supplies.

Read more: ‘I hate you like I love you,’ Germany’s weird relation with Russia has corruption and hypocrisy written all over it

So, countries like Germany are not helping Biden escalate tensions over the Ukraine crisis. They feel that Russia will switch off gas supplies the moment they start provoking Ukraine against Moscow.

So, Biden wants to develop Qatar into an alternate option for the EU. Qatar is a top producer of LNG, mainly on account of its offshore North Field. Its annual production numbers go as high as 77 million tons and this is why Biden is ready to go as far as making Qatar a non-NATO ally.

But what about Japan? Only last year, Japan had given a cold shoulder to Doha because of allegations of cooperating with terror groups against Qatar. Tokyo believed that it was proving itself to be a good, historical US ally.

But what has Biden done? He has literally backstabbed Japan. Tokyo is presently looking for new sources to import gas. The Qatar option to ramp up LNG supplies is gone and if Russia-Ukraine tensions escalate further, then Russian gas supplies too could get hindered.

Meanwhile, the Biden administration has the temerity to ask Tokyo if it can divert its LNG supplies to Europe in case of a Ukraine disruption. Biden failed to take Japan into confidence, embraced Qatar and virtually created an energy security risk for Tokyo out of his sheer desperation to ignite tensions on the Russia-Ukraine border.

This is a diplomatic blunder like no other. It is probably for the first time since the Second World War that a US President has actually ended up putting friendly relations with Japan on stake, and that too for a senseless cause.