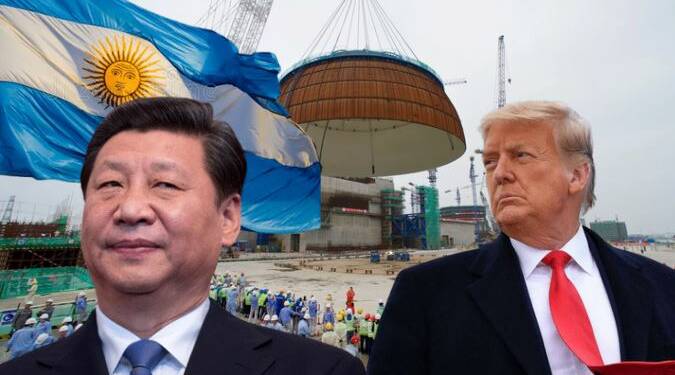 Since Biden has taken over the US President office, his one after another blunders have made the world realise the true success of Trump administration. Trump was truly hard on China. He not just quite effectively controlled the dragon but he mastered the technique to counter its influence across the world. From sanction to black listing of Chinese companies, from import restrictions to trade wars, Trump was extremely active and decisive in taking actions against China.

It was due to Trump’s anti-China policies that China quietly waited for his term to end, to enter the Latin American country of Argentina. Finally, China has started the work on the long pending Nuclear power plant project in Argentina. Last year Argentine president Alberto Fernández decided to reactivate the China-backed project to build a new nuclear power plant in Argentina. The new plant in Buenos Aires province will generate 1,200 MW of electricity and help meet the country’s energy needs, but is questioned for its high costs, potential risks and Chinese involvement.

Also Read: China could be using a space centre in Argentina for military and espionage and Argentina is deeply worried

The project was originally presented in 2015 by Cristina Fernández de Kirchner, who was president from 2007-2015. At the time, the aim was to build two power plants financed by China. One with Canadian CANDU technology, which Argentine plants now use, and the other with the new Chinese Hualong technology.

Former president Mauricio Macri (2015-2019) then questioned the agreement and decided to move forward with only one plant, the one with Chinese technology, to cut costs. However, the project did not advance because of pressure from US and the fear of action from Trump administration. Now, Fernández is looking to first kickstart the Chinese nuclear power plant, with the possibility of adding the CANDU in the medium term.

The nuclear deal is in line with Argentina’s ‘comprehensive strategic alliance’ with China, a high diplomatic status that China reserves for only a few countries. Fernández sees China as a strategic ally in multiple sectors beyond nuclear, and health cooperation during the Covid-19 pandemic has strengthened ties. The agreement with Argentina is one of the Chinese nuclear industry’s first successes abroad.

The Chinese nuclear power plant is a turnkey project, which means that China will design, build and equip the plant. According to the deal, the project will only use around 40% local components, rest everything will be made in China. That’s something which raise a lot of doubts and questions about the safety and security aspects of the project.

Construction of the new nuclear plant has finally started and it will be ready by 2028 at a cost of US$8 billion. Argentina has taken a loan from the Industrial and Commercial Bank of China (ICBC) to finance 85% of the project. The rest will be financed by the government. Here the inclusion of Chinese money raises the risk of China’s debt trap diplomacy.

Read More: Another country falls into China’s debt trap. Zambia’s mines are now in China’s hands as the country struggles to repay debts

Till the time Trump was in power, he and his administration kept China under control across the globe. But since the coming of the Biden administration, China has not just started voyaging across the globe but has finally entered the US backyard too. China’s entry in the Latin American country of Argentina with such a huge investment and project, which is also important through strategic and security point of view, shows that China no more cares about anyone and isn’t afraid of any action or reaction from the Biden administration.