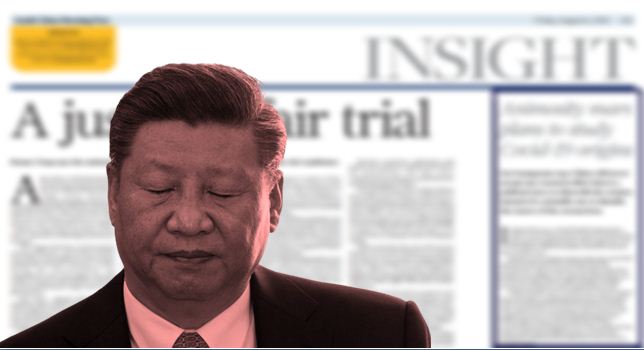 Recently, an article that derided Xi Jinping went viral in China. It was a long, detailed 40,000-word article that listed all mistakes that Jinping had committed over the past decade.

The commentary reviewed Xi’s performance regarding his continuing campaign to eradicate independent religion and beliefs, human rights abuses, its tight surveillance and control of the people, enhancement of propaganda, further revision of children’s textbooks and history books, the strengthening of state-run enterprises and suppression of the private sector, conflicts with the Western world, and winning over developing countries by squandering the national treasury.

The author revealed how Jinping might not be able to secure a third term in office citing rising cases of infighting within the communist party.

“The year 2022 will be his biggest turning point,” the author wrote. “Even if he miraculously secures another term, he will face more difficulties and complete failure before 2027.” The article further mentioned that a good lot of CCP officials don’t like Jinping’s leadership and have started opposing the government due to the expunging campaign-style he employs.

Three factors that could cause Jinping’s collapse

In the end, the article mentioned three factors that could cause the collapse of the Jinping regime.

The article was published on an overseas Chinese blog on January 19 under the pen name of “Ark and China” and was titled, “Evaluate Xi Jinping Objectively.” As soon as the article breached China’s firewall and entered into Chinese social media, it was run riot to be exact. People read it, started sharing it on social media with their friends and relatives.

How did the article go viral in China?

Following its ubiquitous style, the CCP tried to censor the article in every way possible but failed miserably. Chinese youth, well-versed with Chinese censorship tactics, have devised various ways to bypass the CCP’s surveillance mechanism. And then, several vested anti-Jinping factions within the CCP must have played a role in augmenting the article’s reach among the Chinese masses.

Cai Xia, a former professor of political ideology at the CCP’s Central Party School, wrote in an article published on February 6 that CCP officials are using all their resources and solutions to block Xi from taking the next term.

He further said that “Due to the cruelty and bloody infighting within the party, all senior officials understand the hidden rule, which is to choose a faction and fight for it without thinking about what’s right or wrong.”

Factional fighting is on the rise in the CCP, and the viral article is the latest bomb that the anti-Xi factions have detonated. But this is not the first time that Jinping’s rivals came forward to expose his floundering economic and societal policies. Early February, TFI Global had reported how China’s Peking University, WeChat and Chinese media colluded against CCP to expose Jinping’s all failing economic policies.

The report blasted Jinping for fighting a trade war with the US that will eventually end up hurting Chinese interests the most. Interestingly, the report got widely shared on Chinese media and WeChat, despite Chinese censors going all out to prevent people from reading it.

But surprisingly, the article was allowed to go viral at the behest of some anti-Jinping faction.

The ongoing infighting in the CCP is tangible and holds the potential to unseat Xi Jinping by the end of this year. Various Chinese analysts are also saying that China could even become a democratic nation in the coming eight to nine months. Jinping spent the last ten years in power purging his rivals and executing his political opponents; however, nothing bodes well for the paranoid leader. Now, when he is at the cusp of facing a mutiny from his officials, his rivals have joined hands to make things bad worse for the repressive Chinese president.

Chinese shops get plundered in the Solomon Islands