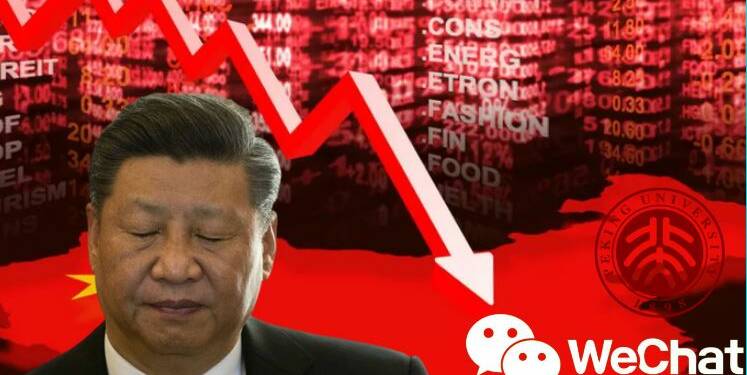 Chinese President Xi Jinping is facing what we can safely describe as a rebellion. Three of his main opponents- the Chinese internet industry, the intelligentsia and the media have most likely colluded together in a bid to take him down.  And it all started with an anti-Jinping report going viral in the country.

Peking University’s Institute of International and Strategic Studies published a report that would have definitely left the Chinese President embarrassed.

The report stated that both the US and China would suffer because of the ongoing tech decoupling. However, China’s losses would be greater than those of the United States of America.

The report stated, “On both technological and industrial levels, both China and the US will face loss from decoupling, and it appears that it would cost China more.”

China “far behind” the US

Even more embarrassing for Jinping is the fact that the report admitted, “China has taken the lead in some small areas, but also obviously lagged behind in others, which are in a vacuum and have hit a bottleneck.”

It further stated, “With more Chinese enterprises being sanctioned by the US, companies like Huawei being pressured by the US in the international market … the daily research and operations of sanctioned Chinese companies and institutions have been limited and many Chinese students find it difficult to plan their studies in the US.”

The report further stated that the decoupling has “no apparent impact on the information technology industry in the US.” In a big shock for Jinping, it even admitted that China China “lags far behind the US” in AI.

The report quite clearly contradicts Jinping’s plans of creating a global technology sector without American technology. It really reflects how Jinping has failed the Chinese tech sector and how the US-China tech decoupling is sort of an endgame for Beijing.

WeChat and Chinese media pick up the anti-Jinping report

Peking University is a State-owned entity and a respected educational institute in China. If it is saying something people are bound to believe it as true.

And guess what the report was posted on the official WeChat account of the Institute of International and Strategic Studies on Sunday. Soon, the report was also picked up by the Chinese media houses and analysts. So, people in China were suddenly reading about Beijing’s defeat in the ongoing tech wars against the US.

In China, it is a big thing if someone is writing about the country’s defeat in the ongoing rivalry with the US. Media houses follow self-censorship and do not generally publish such reports that can give Xi a bad name.

But in this case, WeChat was carefully chosen as the medium to roll anti-Jinping content. Chinese censors were found napping and soon the entire country was reading about Xi Jinping’s embarrassing tech wars with the US.

The South China Morning Post reported that according to a message on WeChat the report was “deleted by the author”. SCMP had discovered this on Friday. So, the report was ultimately censored but not before people read about it and Jinping’s failures got exposed.

But to be fair, Xi brought it upon himself. He has miffed the tech giants by cracking down on them in the recent past. Tencent, which owns WeChat, too has been hit by Xi’s crackdowns.

Meanwhile, Peking University too has been a victim of Xi’s high-handedness. The CCP has curbed academic freedom of the University by running propaganda campaigns against it, torturing students with police brutalities and forcing it to emphasise party loyalty.

And then, Xi has been one of the most difficult Presidents for China to deal with for the Chinese private media. So, the private media too is turning vindictive.

Read more: Jinping’s action against Caixin is his first step towards a political suicide

Xi had made three big enemies- the Chinese private media, the Peking University and Tencent. So, they decided to get together, bypass the CCP censors and expose Xi Jinping before the people of China over his failing economic policies. This is the first sign of rebellion against Xi and if it escalates from here, then we are definitely looking at a dramatic collapse of Xi’s authoritarian regime in China.