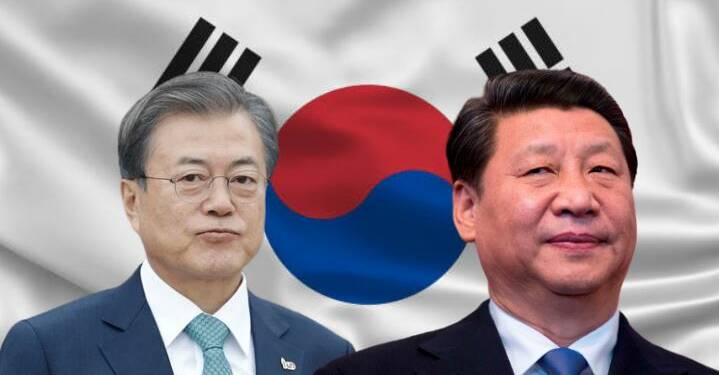 Moon Jae-in, the 12th President of South Korea and a lawyer, has spent his first 59 months in office advocating for Chinese interests above all. Moon’s China love is unsurprising, given the communist nation’s special status as Korea’s largest trading partner.

Also, the Moon government considers China as the only qualified conciliator between North Korea and the South.

Last year, Moon had stated, “relations with China are also very important. China’s cooperation is also crucial for promoting peace on the Korean peninsula.” Furthermore, South Korea’s “New Northern Policy” is also all about promoting trade and connectivity between South Korea and China.

The Belt and Road Initiative (BRI) is perceived as a golden opportunity by the Moon administration despite Korea’s allies terming it as a “debt-trap tool” for China.

But Seoul’s attitude towards the Communist nation is finally changing. The country recently condemned China for its human rights abuses and its intimidation of Taiwan without mincing its words.

Most importantly, the South Korean government issued this path-breaking anti-China statement under a joint communiqué released after the trilateral meeting between the foreign ministers and secretary of South Korea, Japan and the US.

That showed the Moon administration is even willing to work with Japan, with which the nation has shared ambivalent ties, to counter Chinese hegemony in the South China Sea. The joint statement uploaded on the South Korean foreign ministry website said, “The Secretary and Foreign Ministers reiterated their governments’ longstanding support for international law, highlighting, in particular, the importance of compliance with international law as reflected in the United Nations Convention on the Law of the Sea. They emphasized the importance of peace and stability in the Taiwan Strait.”

Read More: The Beijing Olympics goes down in history as the worst PR disaster ever

The reason behind sudden anti-China uprising in South Korea

Well, what’s the reason behind this sudden anti-China uprising in Seoul? The answer is elections the next month. South Korea is going into the election at a time when anti-China sentiments in the nations are sky-high.

For instance, China’s brazen encroachment of South Korean culture in the ongoing Beijing Winter Olympics has already set the cat among the pigeons in South Korea.

A performer at the opening ceremony wore a traditional Korean dress called ‘hanbok’. China was clearly trying to pass off the Korean attire as its own, which has stoked anti-Chinese sentiment in South Korea. Both social media and mainstream media in the country have criticised the Communist nation’s brash behaviour.

And like this was not enough. People in South Korea are also angry over allegations of biased refereeing against Korean athletes. A conservative South Korean civic group even tore up the Chinese flag during a rally near the Chinese Embassy in Seoul last week.

They were protesting against the controversial refereeing against some South Korean short track speed skaters. The protesters were also angry about the silence of their government against Beijing’s unfair actions. The Moon administration knows it can’t afford to pursue its China dove policy if the ruling party desires to win another election.

So, the ruling party is now taking one anti-China decision after another in a bid to dampen the fury of anti-China groups in the country and help tame its rising disapproval ratings.

South Korea is already teaming up with Australia to counter rising Chinese dominance in the EV battery sector. It is also developing defence ties with China’s arch-rivals including the Philippines and India. And all these developments have taken place over the past one or two months.

The Moon administration is incessantly trying to woo young China-hater voters in the upcoming elections, and that explains the sudden anti-China shift in Korea’s foreign policy. However, the Korean voters must see-through Moon’s electoral tactics to stay afloat in these elections and must choose their new leader with sanity while keeping their nation’s interests above all.