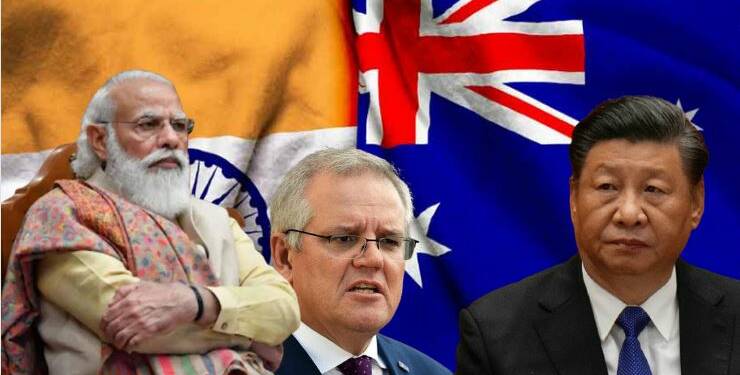 There are very less alliances that have developed as fast as the one between India and Australia. This has been possible only because of the sheer drive and deep intentions from both the sides. The only other relationship that has developed so fast is the one between India & France. Similarly, India and Australia because of their shared values and concerns in the Indo-Pacific have epitomised their engagement.

The India-Australia bonhomie was in full display at the recent quad meet of foreign ministers. When he was asked whether Beijing’s actions constituted economic coercion, India’s Foreign Affairs Minister, Subrahmanyam Jaishankar, said: “You know that bit – if it looks like a duck and it walks like a duck …” To put it bluntly, he exclaimed, India has taken sides with Australia against China’s policy of using trade bans as political punishment.

However, this time, India has not just made a diplomatic statement in passing, but it has also provided a tool for Australia to entirely come out of the Chinese Communist Party’s clutches.

Union minister Piyush Goyal said in a post-ministerial meeting address in New Delhi on Thursday that India and Australia will finalise a small free trade agreement (FTA) in the next 30 days. Goyal said during the first day of negotiations with his Australian counterpart Dan Tehan that the restricted trade pact dubbed the “early harvest agreement,” is anticipated to encompass a wide range of sectors, including textiles, pharma, health, education, renewables, and gems and jewellery.

“That’s the kind of aggressive timelines we have set for our teams today. I am quite confident that we will come up with some exciting news for the businesses in both countries,” said Goyal in his address. He noted that FTAs presently cover 75 per cent of Australia’s commerce and that this figure might rise to 90 per cent after the India trade agreement is signed. The FTA talks are taking place against a backdrop of 120 per cent growth in bilateral trade from April to December 2021 compared to the same period the previous year.

Also read: Australia’s “secret base” will be used to launch the biggest-ever missile strike on China

The increase coincided with the supply chain resilience programme, which was established earlier this fiscal year to offset China’s supply chain dominance in the Indo-Pacific area. Increased industry awareness and interest in anticipation of a trade pact, notably for Indian textiles, leather, footwear, and gems and jewellery, according to trade analysts.

Dr Jaishankar was in Melbourne for a conference of the Quad countries’ foreign affairs ministers — Australia, India, Japan, and the United States, which make up the Indo-Pacific democracies. Dan Tehan, Australia’s trade minister, was in Delhi at the same time, negotiating a free trade agreement with his Indian counterpart.

According to Dr Jaishankar, the FTA negotiations should result in “a much larger quantum of trade and investment between Australia and India.” Addressing supply chain reliance on China, he said the epidemic had revealed an overconcentration on specific markets, and the new agreement should help alleviate such issues.

“A lot of the progress and prosperity of the last 70 to 80 years is because of the fact that trade has been governed by rules and not politically influenced or driven or determined,” Dr Jaishankar told The Sydney Morning Herald and The Age in an interview. “We were all very clear” in the Quad ministers’ meeting, he said, that “we all believe politics should not be conducted by coercion at any time.”

“Right now, my big concern after 45 years of a relatively stable, even peaceful, relationship on the border with China is that two years ago, for reasons still not clear to us and not credibly explained to us, China moved a very large force to the border,” he said, referring to agreements covering land and sea border disputes.

He also stated that governments that ratified the United Nations Convention on the Law of the Sea, such as India and Bangladesh, should submit to the rulings of its arbitration bodies. This is an implicit criticism of Beijing for rejecting an arbitration finding that China’s claims to sea regions also claimed by the Philippines have no legal validity.

Such over-the-top support for Australia coming from India is a very specific yet important development. In addition to this, India has provided an incentive that can not only fill in the losses that Canberra incurred due to the Trade war with China; but also create a trade relationship that has even more incentives than China. While India in itself is not sufficient to replace China as a trade partner entirely, the model that India has provided can end up creating a chain reaction among all the China-hawk Indo-Pacific powers. This trend setting will make sure that Xi Jinping’s China losses its economic clout in the region, and thereby the only leverage against its adversaries.