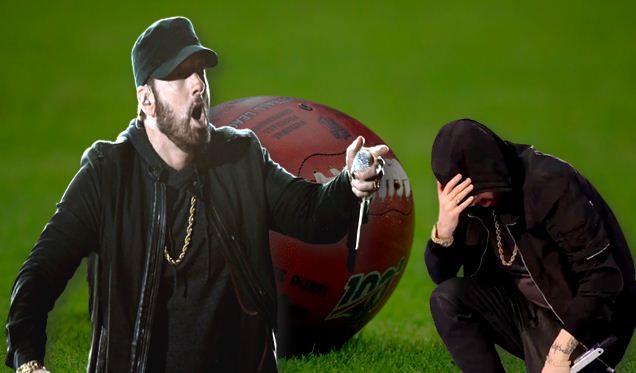 In a recent super bowl match, Eminem took a knee in support of the much extolled Black Lives Matter (BLM) movement. The 15 time Grammy winner kneeled on stage during his Super Bowl 2022 halftime show performance, despite palpable objections from the NFL, since the act has a semblance of being political and is being transpired as a protest against police brutality and racial inequality. According to some reports, the rapper was at odds with the NFL over kneeling during a star-stubbed halftime show. League officials also knew going into Sunday that the rapper would take a knee because he has been seen enacting this in his rehearsals quite often.

Eminem has re-ignited the controversy regarding taking the knee which is seen as a protest against police brutality and racism in the US. The kneeling of Eminem was an apparent tribute to NFL (National Football League) player Colin Kaepernick. However, it has been reported that the NFL has denied that it attempted to stop Eminem from kneeling during his performance.

NFL player Colin Kaepernick, took a knee during the national anthem to protest police brutality during the 2016 season. Soon after Kaepernick’s protest, other players followed suit and the move created widespread cultural controversy in the US. The NFL received criticism of its handling of the matter since Kaepernick has not played in the league since the end of the 2016 season. It is speculated that the African-American player was blackballed by the league’s teams and owners over his political expression.

The dark side of the BLM movement

BLM movement from its beginning has been surrounded with controversies. From its alleged support to the terrorist organization Hamas to its monetary frauds, the BLM and the organizations affiliated with it have been time and again found to be in corrupt practices across the world. It truly is a political movement and has nothing to do with the social or justice movement. This has been proved on and off by various investigation agencies in the US. The California Department of Justice has also previously threatened to hold the organisation accountable for its lack of financial transparency, which includes at least $60 million in undisclosed donations.

It is quite clear that the movement has its political motives and agendas. It is devoid of any connection with sports or sportsmanship. And, that’s why connecting it with sports or any sports events like the super bowl, just does not make any sense. It is just woke and anti-white propaganda being forced by the artists and other elites just to attract global attention and exposure.

story of divorce of Baron Davis and Isabella Brewster