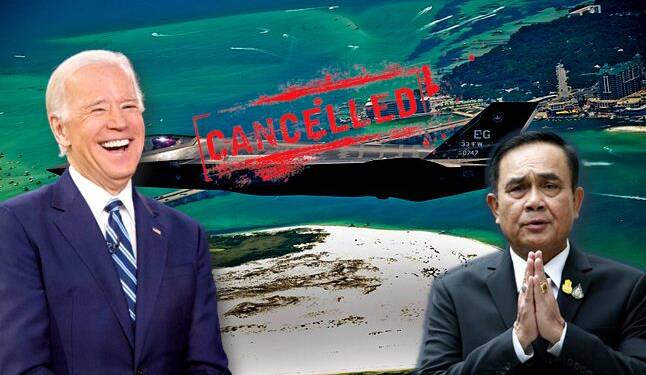 In recent times, the Biden administration was on a mission to damage its relations with its allies and treaty partners. It all started with France when the US forced Australia to cancel the French submarine deal for a US-UK submarine offer. The next in line was UAE, which went with French Rafale when the US started showing resistance to the F35 sale. The most recent is from Indonesia, which ignored all of the US fighter jets and went for the French Rafale deal instead.

Now, the US has backstabbed again one of its closest treaty allies in Thailand. The country was extremely interested in buying the 5th Gen advance F35 jets from the US, and now will have to look for something else.

Also Read: China is all set to try again and fail again to turn Thailand into its BRI puppet

Several key US allies including South Korea, Australia, Japan, have F-35s with them and on the latest, Singapore is set to follow suit. Next in line was Thailand, America’s longstanding treaty ally in Asia. Thailand, which already operates US jets like F-16 and F-5, wanted an up-gradation to the advanced 5th Gen fighters from the US.

In mid-January, the nation’s cabinet agreed in principle to back the Royal Thai Air Force’s plan to procure four new fighters for 13.8 billion baht (US$415 million) during the 2023 fiscal year to replace the air force’s ageing fleet of F-16A/B Fighting Falcons and F-5s. The air force chief, ACM Napadej Dhupatemiya, had previously expressed an interest in F-35 stealth fighter jets and seemed confident to pull through the purchase since the aircraft had become more affordable at US$80 million per shot. He said the F-35 had “top-notch” performance and the purchase would enable Thailand “to stay in the same league of countries with advanced fighters”.

Tim Cahill, Lockheed Martin’s senior vice president for global business, confirmed on the sidelines of the recent Singapore Air show that Thailand had expressed interest in the F-35 fighter but it’s up to the US government to clear it. Cahill was quoted as saying: “This will be a US government policy decision”. Many analysts and defence experts say that there’s no guarantee that Washington will ever approve the F35 sale to Thailand. The experts also argue that the cancellation of the deal will push Thailand towards French Rafale, just like UAE and Indonesia.

Why was the deal an opportunity for Thailand as well as the US?

It was a logical step by the Royal Thai Air force to go with an American jet, as they already operate several jets from US vendors. This would make it easy to integrate the new jets and tune them to be compatible with their existing systems. China is so desperate to establish an authoritarian control over its trade routes that it keeps finding new ways to somehow bypass the Strait of Malacca. It wants to avoid the Malacca dilemma.

Till now, Beijing was trying to get Thailand on board in their prodigious Kra canal project. However, Bangkok shot down the project after it realized that Beijing was trying to debt-trap it and nevertheless, the public also started opposing the rapidly mounting Chinese influence in the country. The big Belt and Road Initiative (BRI) project needs Thailand’s backing since it can only help the Chinese rail line reach Malaysia and Singapore. However, Bangkok doesn’t seem to be keen on the project. Thailand now has a changed mind. The Southeast Asian nation got upset by the unfair loan conditions set by the Chinese government and has now stalled the project.

By rejecting to sell the F35s to Thailand, the US has again distanced one of its close associates in Asia. It also serves as a warning sign to other allies of the US that during hard times, it will, perchance, backstab them too. Biden’s policy of damaging the relations with its allies across the world will only help China increase its influence, outreach and control over the Indo-Pacific.