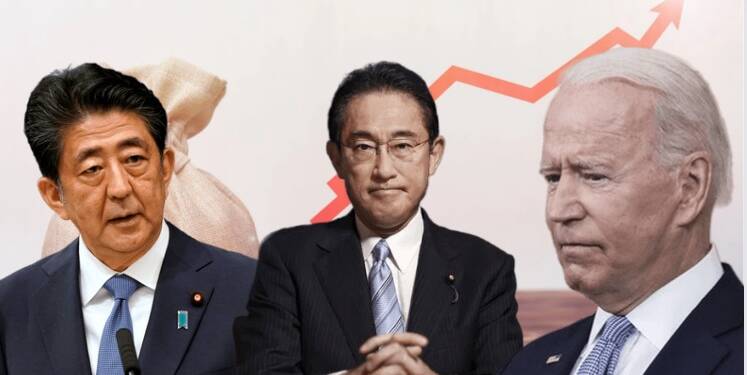 The ongoing Russia – Ukraine crisis has not just affected the two rival economies, but it has immensely affected several other countries that are import-dependent economies. Japan, being one of the most import-reliant economies, is feeling the heat as the fear of further pressure on already elevated crude oil and commodity prices arises.

Propelled by the standoff between the West and Russia, the Middle East crude oil futures briefly hit 62,920 yen ($550) per kiloliter at the Tokyo Commodity Exchange on 14th February, the highest level since October 2014.

If Moscow cuts the gas, oil and other energy supplies in retaliation to US and EU sanctions, it will result in further rising oil and gas prices, rising commodity prices and inflation growth in many countries. Well, that’s not a farfetched possibility, but actually a reality in the case of Japan.

Also Read: Biden is fuelling the Ukraine crisis at the cost of friendly relations with Japan

Norihiro Fujito, a senior investment strategist at Mitsubishi UFJ Morgan Stanley Securities Co, recently said, “The geopolitical tensions are attributable to recent rises in commodity prices as well as inflation. Japanese companies’ profit margins could narrow, as it is challenging for firms to greatly raise prices to make up for increasing costs”. He added, “The Ukraine crisis may force some companies to revise and downgrade their profit outlook for the fiscal year 2022 starting in April”.

However, the Petroleum Association of Japan believes oil prices will rise to higher levels in the event of a Russian invasion of Ukraine, calling for the government to introduce additional advanced measures to cushion a potential impact on Japanese markets and the economy.

Since the beginning of the Ukraine – Russia conflict, the US has successfully tried to drag Japan in. The Kishida administration too has not resisted and has been blindly following the Biden administration’s policies on the issue. To fulfil the demand of Biden, the Kishida administration agreed to divert Japan’s LNG imports to Europe. The gas diversion to Europe caused severe supply shortages in Japan and thus increasing the prices across the country.

Also, to counter the effects of his previous stupid moves, Kishida later decided to give subsidies on oil to control the rising prices. This decision will create pressure on Japan government’s funds and reserves. It simply is not a long term or permanent solution but rather a face-saving temporary step by the Kishida administration.

In an interview with Japan Today, former Prime Minister Shinzo Abe recently said, “I think Japan should use diplomacy to sever the concerted efforts between China and Russia, and move ahead with improving its ties with Russia”. He called for increased Japanese diplomatic efforts with Moscow, which would help to undercut the growing Chinese influence in Russia. Shinzo Abe has several times made it pretty clear that Moscow’s growing ties with Beijing need to be severed, and Japan needs to play a big role in doing so.

Shinzo Abe knows Vladimir Putin is forging an alliance with China out of compulsion as he does not want to lose access to the Chinese market. So, the alternative that the former Japanese Prime Minister is offering is quite simple. Rather than focusing on Ukraine, Japan needs to be much more worried about its immediate neighbourhood and stability therein. If China’s rise is not contained, and Beijing secures a friend of the size and scale of Russia – Japan’s security interests will end up taking a big hit.

Despite several consecutive warnings and advice by former PM Shinzo Abe, it seems that PM Kishida has completely ignored him and rather gone into the Ukraine hangover with Biden. The result of this is not just visible in terms of rising inflation but the situation of the Japanese economy may be on the verge of a greater fall soon.