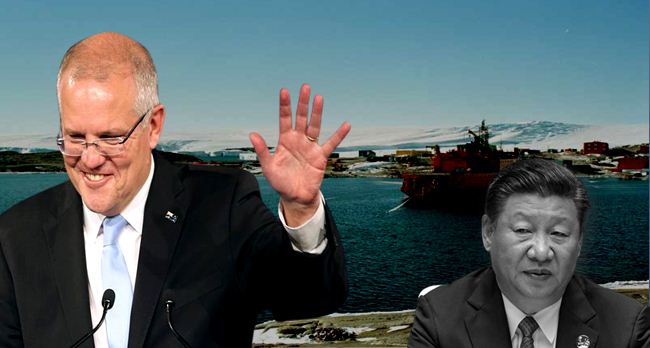 The continent of Antarctica has always been protected by the Antarctica Treaty. The 1959 treaty bans mining and protects fisheries and other wildlife on the continent. The treaty safeguards the natural environment and ecosystem of the continent and restricts every country on the planet only to scientific research, study and other peaceful purposes.

Australia’s claim of 42 per cent of the continent has also been upheld in the Treaty.

In a recent election campaign in Tasmania, the Australian PM Scot Morrison said that the government will spend $804.4 million in Tasmania, Antarctica and the region over the next decade. The funding would strengthen Australia’s strategic and scientific capabilities in the region.

Also Read: Scott Morrison will now use a Chinese app to run an anti-China campaign among Chinese Australians

Australia lays claim to 42 per cent of the Antarctic territory and is the pre-eminent nation in that part of the world in terms of scientific research, giving it significant currency. Also, Tasmania, the island state of Australia is considered as the political, administrative and influential centre of Antarctica and the region. It is through Tasmania that Australia controls and commands Antarctica.

Australia’s Antarctic operations are monitored from Tasmania’s capital Hobart. It’s Australia’s gateway towards Antarctica. As the Morrison administration is facing upcoming federal elections (scheduled for May 2022), it is on a campaign journey in Tasmania, to ensure that the state votes for the Liberal Party.

According to Australia’s environment ministry statement, the ongoing investment in Antarctica will directly support jobs at home, with Australian businesses, contractors, medical suppliers and providers reaping the benefits of local procurement. The $800 million commitment supports the next decade of Australia’s operations in Antarctica and provides more opportunities for local businesses across Australia, especially in Tasmania.

The state is also important for the Morrison administration’s future plans of expanding and increasing Australia’s influence, command and control over the region.

Australia knows that China, US and Russia, all have increasing interests in Antarctica and the region. The interests range from the fishery, mining, exploration, raw materials, military & defence and many other resources. It is just the Antarctica treaty, which expires in 2048, that has kept a check on the activities of these world powers.

The $804.4 million promised by PM Morrison includes $3.4 million to “enhance Australia’s international engagement to support the rules and norms of the Antarctic Treaty system and promote Australia’s leadership in Antarctic affairs”.

Reacting to the announcement, the Australian environment Minister Sussan Ley said, “The strategic importance of our scientific leadership is clear. We need to ensure that the Antarctic remains a place of science and conservation, one that is free from conflict and which is protected from exploitation. Science is the key to that future. This investment … will reflect Australia’s commitment to our sovereignty in the Australian Antarctic Territory and its leading voice in the region”.

He further said, “To significantly boost the scope for research, there will be $35.5 million for four helicopters, each with a range of 550 kilometres, which can operate from the new, state-of-the-art Antarctic vessel, the Nuyina. The ship itself will receive $44.5 million in support to expand its range, so it can undertake extended scientific missions. Another $60.6 million will fund drone fleets and other autonomous vehicles to map inaccessible and fragile areas of the continent”.

Read More: Anticipating Chinese belligerence in Antarctica, Australia is ready for a fight with its new runway move

The Chinese and US threat

Both, China and US have been increasingly expanding their presence in the Antarctic. China, failed to challenge Russia’s authority, presence and control over the Arctic and had to take an exit from the region. but as things are unfolding, Beijing is back trying to expand its footprint in the Antarctic.

Last year, China built its fifth research station base in Australia’s territory and has long been suspected of wanting to subvert or circumvent the Antarctic Treaty by exploiting fisheries and tourism and, possibly, mine the continent.

Dr Elizabeth Buchanan, a lecturer in strategic studies at Deakin University’s School of Humanities and Social Sciences, and a fellow of the Modern War Institute at West Point Military Academy said last year, “It is likely China is working beneath the co-operative surface of the treaty and setting itself up for a post-treaty Antarctica (should the treaty collapse)”. She added, “If the treaty were upheld, there is nothing stopping Beijing from opting out and engaging in Antarctica unrestrained by treaty obligations”.

The US too has been trying to expand its influence and presence in the Antarctic. Though, it maintains its obligation towards the Antarctica Treaty the US never accepted in full the Australian claims over the Antarctic. Currently, both US and Australia are deepening their ties with the AUKUS deal. But, in future, there’s a possibility that both countries may come to some disagreements over Antarctica and their claims in the region. This will most probably lead to a conflict and end up inviting more players like China and Russia into the fray. And that would be truly dangerous and destructive for the Antarctic continent, the wildlife and the biodiversity of the region.

Well, whatever may be the future of Antarctica and the region; it is for sure that Australia has played it quite smart in strengthening its influence, claims, control over that part of the world. Also, by such large scale investments, Morrison’s administration is sure to end Jinping’s and Biden’s hegemony over Antarctica.