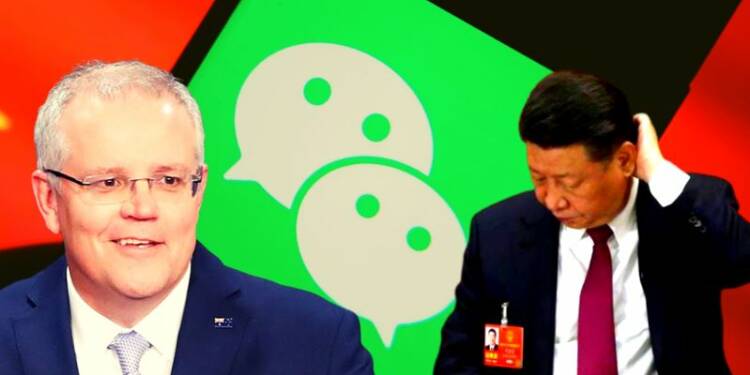 China created an entire international propaganda machinery for itself that includes its State media, influence in international newspapers and the Chinese tech industry. But Beijing could have never imagined that a foreign leader would end up using the Chinese propaganda machinery to disseminate anti-China content but Morrison is just about to do that.

Australian PM Scott Morrison and the Chinese Communist Party (CCP) are in a standoff situation all over again.

Last month, China’s WeChat virtually banned Scott Morrison and sold his account to a private firm. Liberal Senator James Paterson, the chairperson of the Federal Parliament’s intelligence and security committee, said thatt the takeover was likely sanctioned by the Chinese government and amounted to “foreign interference”.

After this, some of Morrison’s Liberal party colleagues demanded that other Australian politicians boycott the Chinese app, while raising concerns of potential foreign interference. Now, there were two options- either Morrison could ban WeChat in Australia or he could exploit it to the CCP’s disadvantage. And he clearly chose the latter.

The Australian Prime Minister has confirmed that he is willing to rejoin WeChat despite his account reportedly getting “hijacked” last month.

It is election season in Australia and the country is set to go to polls in May 2022. So, during an online briefing with Chinese media, Morrison said he is hoping to use the Tencent-owned app for reaching out to the Chinese-speaking voters. The Prime Minister said, “We’d love to, but we don’t control WeChat, effectively that ultimately goes all the way back to the Chinese government.”

Like all other Chinese expats, Chinese Australians too use WeChat. Chinese expats who move into other countries cannot connect with their families and friends back home because of CCP’s Great Firewall that bans all apps like Facebook, Whatsapp, Instagram, Snapchat and Twitter in China. So, all that the Chinese expats are left with is WeChat.

Read more: Bigger than Huawei or TikTok ban, Trump’s ban on WeChat could start a whole anti-CCP revolution in China.

In Australia, the Chinese Australians form a crucial electoral constituency, representing 5.6 percent of the country’s total population. This is why Morrison had used WeChat extensively in 2019 to reach out to Chinese voters and Opposition leader Anthony Albanese too is using the Chinese messaging app to connect with the Chinese Australian community.

It therefore makes sense for Morrison to use WeChat at this juncture. In fact, he can reappear on the Chinese messaging app, gain instant popularity and start mounting his anti-CCP campaign all over again. He can expose the misdeeds of the Chinese government to the Chinese Australians, from whom it can easily reach into China and instigate a major rebellion against the CCP.

We know that Morrison is going to disseminate anti-CCP content, because his entire poll campaign is based on his anti-China hawk image.

For CCP, this creates a tricky situation.

By reappearing on WeChat, Morrison will avoid any criticism that he could have faced on banning the app. You know, the opposition looks for such opportunities to label the government as oppressive and harsh.

However, Morrison can now set the conditions for his return. During his earlier experience with WeChat, Morrison did use the app to criticise the CCP, but he was also censored heavily by China.

The Australian Prime Minister has earlier suggested that any return to the platform would need to be based on “freedom of speech and the ability to speak to each other in an uncensored way”.

Now, ideally what CCP does is that it allows foreign leaders to use WeChat and other Chinese apps. But the moment China gets exposed, it starts censoring content. However, it cannot do so with Morrison.

Morrison is going to return to WeChat with the express condition that there will be no censorship. If China still censors him, the federal government in Australia will have a very strong excuse to ban WeChat. In the end, WeChat could end up losing a big market and the CCP could face the wrath of mainland of Chinese Australians who will lose their only link of communication in the background of China’s Great Firewall.

Morrison is thus set to flood WeChat with anti-China content and the CCP censors have no option but to watch on helplessly.