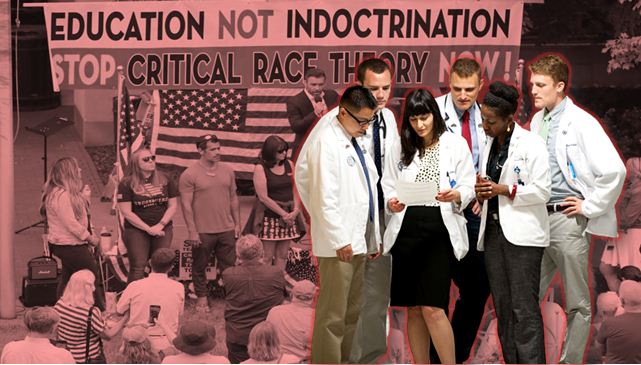 A watchdog website documenting leftist indoctrination in K-12 and higher education has warned that nearly all of the nation’s top 25 medical schools are adding ideas connected to critical race theory (CRT) into mandated training sessions for students and staff. A new database on America’s most famous medical schools has recently been placed online by Critical Race Training in Education, an initiative launched by Cornell University law professor William Jacobson. According to the database, 23 of the 25 colleges have some type of mandated CRT ideology instruction or curriculum for students.

“The training can be targeted, such as a new requirement for a major or a department, or school-wide,” according to the website, which also notes that the subjects of those training and coursework may be worded differently at individual schools, but typically use terms like “anti-racism,” “cultural competency,” “equity,” “implicit bias,” “DEI (diversity, equity, and inclusion),” and critical race theory. Employees at 17 schools are required to complete CRT training, according to the database.

The American Medical Association (AMA), the largest national organisation representing physicians and medical students, said this year that it would abandon its long-held notion of meritocracy in favour of “racial justice” and “health equity.”

The American Medical Association (AMA) published an 86-page strategy plan outlining how the advocacy group will utilise its power to combat “structural and institutional racism” and advance “social and racial justice” in America’s healthcare system during the next three years. The statement says it wants to “extend the medical school and physician education to incorporate equity, anti-racism, structural competencies, public health and social sciences, critical race theory, and historical basis of disease,” among other things.

In the USA the left-liberal combine has been pushing the racial divide for their political benefit, the latest weapon in their arsenal being the Critical Race Theory (CRT). However, as more and more people are becoming aware of the poison it is instilling in small children, the parents are now taking a non-compromising stand against it. It is not just the white parents but people across all colours are now speaking against the Critical Race Theory. They have first-hand experience of what was being taught in schools during the pandemic and how adversely it will impact the next generation.

Fearing how things are unfolding, teachers are getting targeted and some have even refused to send their kids to school until CRT is removed from the curriculum. Through CRT, it is visible what the next generation of children are being indoctrinated with, which is far from any sensible reform or progressive policy. Pans have been emerging which teach children to see themselves through their skin tones and indoctrinate them to view history as well as American jurisprudence not as it is or was, but from a perspective that is centred strictly around their race.

Criticism of introduction of CRT

Jacobson, a longtime critic of CRT said “The so-called ‘anti-racism’ movement’s credo has no place in medicine.” “Using current racial prejudice to address previous racial discrimination is incorrect in general, but it’s downright dangerous in medicine,” the professor said, quoting Ibram X. Kendi’s book “How to Be an Antiracist.” “When a patient comes in for treatment, he or she should be treated as an individual, not as a member of a broader racial or cultural group,”.

Jacobson also holds the opinion that the so-called “woke” movement will take along medical education into a path that is perilous enough to fight a comeback.